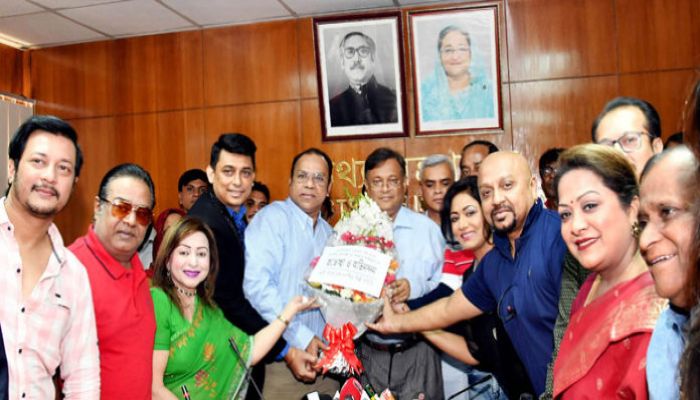 “The sterile period of our film industry is over . . . but we need time to get back the golden era of the industry,” he said when the new executive committee members of Bangladesh Cholochitro Shilpi Samiti (BCSS) made a courtesy call on him at the meeting room of Information Ministry at Secretariat here.

The minister said the film industry is one of the oldest media in Bangladesh.

He said Father of the Nation Bangabandhu Sheikh Mujibur Rahman, understanding the impact of films on society, tabled a bill in the provincial assembly of erstwhile East Pakistan for the formation of Film Development Corporation (FDC) in 1957 and in continuation to that, the FDC was established.

A film is the mirror of society and it talks about the people, Hasan said, adding: “We have to work together to bring back the golden chapter of our film industry for healthy cultural practices in the country.”

He said a film portrays the history of people, their lifestyle, and their tales of sorrows and happiness. “Films play an outstanding role in depicting the life of people and their (people) thoughts,” he added.

Hasan said, “I’ve already talked with the finance minister and Bangladesh Bank authority for an easy and long-term loan for the cinema hall owners.”

He said the present government under the supervision of Prime Minister Sheikh Hasina has taken various initiatives, including constructing a new building with modern equipment and technologies at a cost of around Taka 322 crore at FDC, for the development of the film industry.

“We will take all necessary initiatives for modernization of FDC,” he added.

The minister said the Bangabandhu Film City in Gazipur will be turned into a world-class spot within the shortest possible time. Good movies are being produced in Bangladesh and some movies are receiving international awards and acclaims too, he added.

The minister urged all concerned including producers and film directors to make good films for the development of the film industry.