10 Movies to Watch amid Coronavirus Outbreak 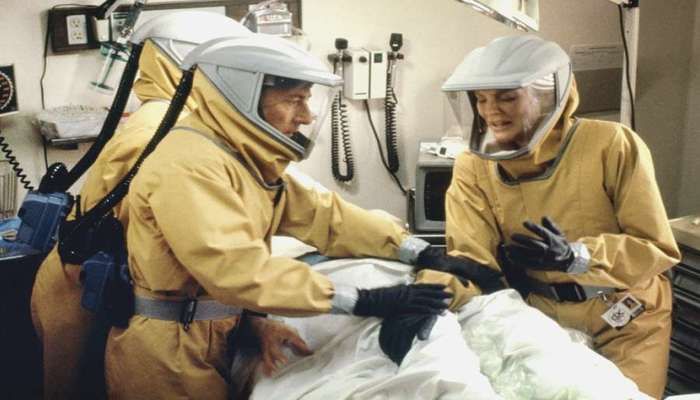 ﻿Ten movies that have previously depicted how a virus outbreak affects society at large.

As people continue to socially distance themselves, here are ten movies that one can watch to take solace from movies that have previously depicted how a virus outbreak affects society at large.

"Healthcare professionals, government officials, and everyday people find themselves in the midst of a worldwide epidemic as the CDC works to find a cure."

"In a future world devastated by disease, a convict is sent back in time to gather information about the man-made virus that wiped out most of the human population on the planet."

"A man seeks answers about life, death, and the existence of God as he plays chess against the Grim Reaper during the Black Plague."

"Army doctors struggle to find a cure for a deadly virus spreading throughout a California town that was brought to America by an African monkey."

"Former United Nations employee Gerry Lane traverses the world in a race against time to stop a zombie pandemic stemming from a virus outbreak that is toppling armies and governments and threatens to destroy humanity itself."

"Secure within a desolate home as an unnatural threat terrorizes the world, a man has established a tenuous domestic order with his wife and son. Then a desperate young family arrives seeking refuge."

"Four weeks after a mysterious, incurable virus spreads throughout the UK, a handful of survivors try to find sanctuary."

"When a disease turns all of humanity into the living dead, the last man on earth becomes a reluctant vampire hunter."

"A small group of military officers and scientists dwell in an underground bunker as the world above is overrun by zombies."

"After a virus devastates the global human population, survivors in Antarctica desperately try to find a cure and save the human race."