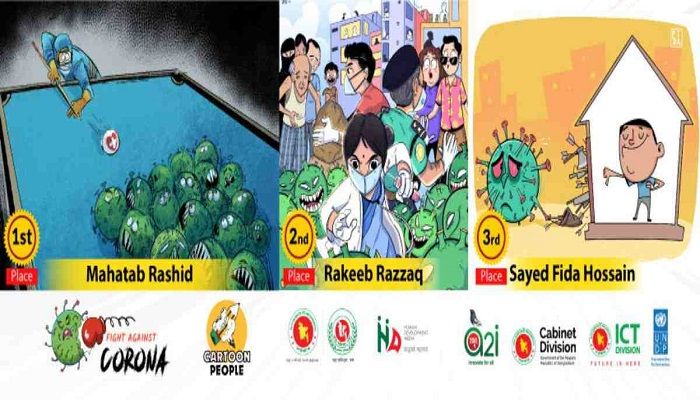 Cartoon People, a group of creative cartoonists, arranged the contest with support from a2i, said a press release. A total of 787 awareness cartoons were submitted by more than 300 local and international participants since the competition was announced. Ahsan Habib, cartoonist and editor of Unmad magazine, along with poet and journalist Anik Khan and writer and animated film production manager Wahid Ibn Reza were the juries for this cartoon competition. Syed Rashad Imam Tanmoy, the founder of Cartoon People, said from the very beginning of coronavirus, we’ve been thinking about how cartoonists can be useful and work as a support.

Cartooning is a great medium to grab the attention of the mass people, he said adding that the aim was to present the awareness messages through simple visuals for fellow citizens. Personal Hygiene, Social distancing and myth-busting were focused in the beginning.

Tanmoy also said that once HD Media, a2i came on board and announced the prize money the number of participation skyrocketed. Altogether 154 final cartoons have been selected out of the 787 submissions to distribute for free and anyone can use these cartoons to raise awareness. Anyone can download and use the cartoons from Google Drive for free--- https://drive.google.com/drive/folders/1WwuMv20zte6nNhsCdmF-7zl3rVRMShZ2