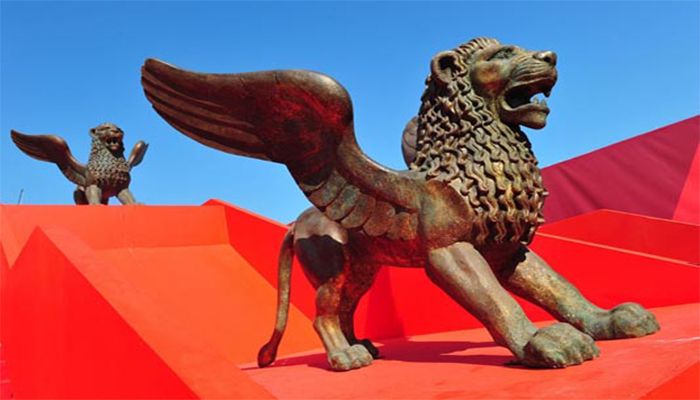 ﻿﻿The Golden Lion, the top prize at the Venice Film Festival, which will take place on Saturday, will be awarded to one of the 18 film contestants from around the globe, reports AFP.

Here are some of the films in the running:

The story of five sisters in Palermo, seen at different points in their lives, culminating in a family funeral in Emma Dante's film.

A dystopian film from Michel Franco depicts social and economic disparity in Mexico, starting with a well-to-do family wedding and ending in a coup d’etat.

Five women’s stories interweave in the course of one night at a Haifa club. As one of the few spaces where Israelis and Palestinians can mingle, director Amos Gitai turns the venue itself into a protagonist.

Based on the true story of a 1962 labour strike in Novocherkassk, USSR, in which 26 protesters were shot by Soviet troops. Andrei Konchalosky’s film retells events kept secret until the 1990s.

Against the backdrop of a looming World War II and the invasion of Manchuria, a wife’s love is tested and her Kobe merchant husband struggles with loyalty and betrayal in Kiyoshi Kurosawa’s film.

Ali and his friends work small jobs and hustle to support their families. Majid Majidi’s film explores what happens when Ali learns of an underground treasure.

Martha and Sean (Vanessa Kirby and Shia LaBeouf) are a Boston couple whose baby dies after a home birth. Director Kornel Mundruczo shows how grieving Martha navigates her relationships with her husband and mother (Ellen Burstyn), while facing the midwife (Molly Parker) in court.

Susanna Nicchiarelli tells the story of Eleanor, the youngest daughter of Karl Marx, who battled for the rights of workers and women while dealing with an unhappy love affair.

The life of 10-year-old Valerio is turned upside down when he and his mother witness a terrorist attack against his father in this autobiographical film from director Claudio Noce.

– ‘Notturno’: Italy/France/Germany – Shot over three years on the borders of Iraq, Kurdistan, Syria and Lebanon, Gianfranco Rosi’s documentary follows people trying to survive despite the violence around them.

A mysterious masseur from Ukraine, Zhenia becomes a guru for a spiritually barren gated community in this film by Malgorzata Szumowska and Michal Englert.

Director Chaitanya Tamhane tells the story of Sharad, following his dream of becoming an Indian classical vocalist in the vast metropolis of Mumbai.

In Julia von Heinz 's film, Luisa and her anti-fascist group challenge how far they are willing to go to combat hate after a wave of racist attacks in Germany.

Based on the true events of Srebrenica in 1995. Aida is a translator working for the United Nations peacekeeping force. When the Bosnian Serb army invades, she and thousands of others are looking for protection at the Dutch UN camp in Jasmila Zbanic 's film.

Director Chloe Zhao tells the story of Fern (Frances McDormand) who is leaving her poor town of Nevada in her van to scratch her life as a modern-day pastoral nomad.

Davud is a restless young man on a journey of self-discovery through Hilal Baydarov’s film, keeping ahead of men pursuing him. When his journey ends at home, Davud finds the love he’s seeking — but is it too late?