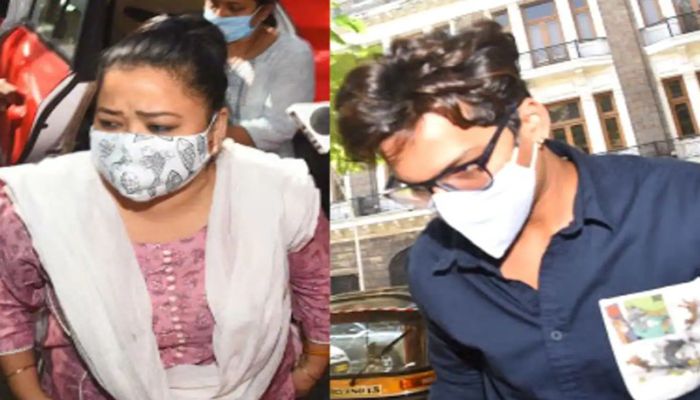 Comedian Bharti Singh and her husband accused by the NCB of taking drugs. Photo: Collected

Indian comedian Bharti Singh has been arrested after questioning by the Narcotics Control Bureau in Mumbai.

Ms Singh and her husband, Harsh Limbachiyaa, were taken to the NCB's Mumbai office for questioning after the anti-drug agency recovered a "small quantity of cannabis" during a search of their home this morning.

Visuals from outside their residence - an apartment complex in Andheri - showed Ms Singh being driven away in a red Mercedes, while Mr Limbachiyaa was taken in a white NCB van.

Ms Singh, on arriving at the NCB's office, told reporters: "They have called us for some questioning, that's all."

"Bharti and her husband have been detained for questioning about possession of narcotics substances," Sameer Wankhede, one of the investigating officials, told news agency ANI earlier.

According to another NCB official, quoted by news agency PTI, Ms Singh's name emerged during questioning of a drug peddler; a search of her home recovered a "small quantity of cannabis". The agency also carried out searches at two other locations in Mumbai, the official added.

The raids come amid an expanding probe - which began with inquiries into the death of actor Sushant Singh Rajput in June - into alleged drug use by members of the entertainment industry.

Earlier this month actor Arjun Rampal's home was searched, and both he and his girlfriend, Gabriella Demetriades, were summoned for questioning.