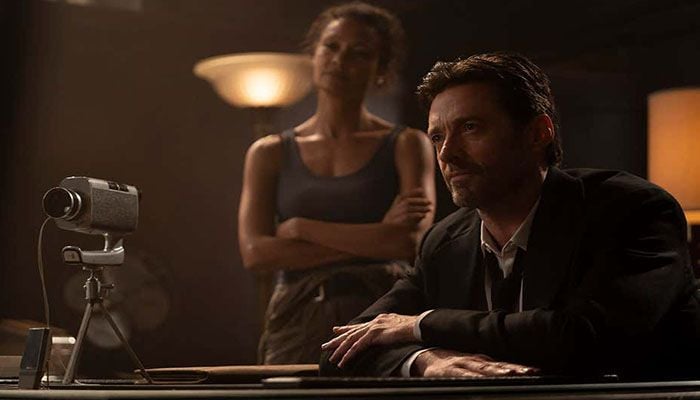 ﻿A neo-noir mystery, a love story, and tech-assisted journeys through the darkest parts of the mind all factor into Reminiscence. Written and directed by Westworld co-creator Lisa Joy, the sci-fi drama stars Hugh Jackman as a man who specializes in recovering memories—until he falls for an alluring client (Rebecca Ferguson) who suddenly vanishes. Take a look at the first trailer and find out what else io9 learned about the film recently.

Reminiscence is set in a near-future version of Miami, where flooded streets show the very real effects of climate change—and a recent war has deepened the chasm between rich and poor, not to mention bolstering the power of the underworld. Jackman plays a “private investigator of the mind” named Nick Bannister, who runs a company with Watts (Westworld’s Thandiwe Newton) that allows people to access their near-forgotten memories. In true noir fashion, Nick’s seedy world turns upside down when he meets Mae (Ferguson), a femme fatale who starts off as a client, becomes his lover, and then suddenly vanishes.

To see the trailer: https://www.youtube.com/watch?v=_BggT--yxf0

“[The technology allows] people not just to revisit memories, but to relive them—as in to feel them, to see them, to touch them, to hear them. It’s a technology that was developed in our world during the war, which [Nick] had to use for interrogations. So my character is a fairly broken man at the beginning, fairly tough exterior; his experience during the war as an interrogator but also on the front lines has left him really quite broken and really sort of disengaged and distrusting of the world,” Jackman explained at a recent Reminiscence press event io9 attended virtually. “He has this company which is fading at best, and into that world comes the incredible Mae, and that changes everything. He’s just immediately intrigued and drawn in and mesmerized, and increasingly becomes obsessed with her—and needs to discover what has happened because he knows in his heart that something bad has happened to her.”

Joy, who’s making her feature directorial debut with Reminiscence, describes the project as “a labor of love,” and said that Jackman was her first and only choice to play Nick. “I just knew when I was writing it, I knew it was him, and I couldn’t imagine anyone else. And then I was incredibly lucky because once Hugh said he was in, I knew I had to find my Mae. All I needed was somebody who could do tragedy, who could seduce but also be vulnerable, be witty, and sing. So five different characters in one—it was like casting five different people. Through process of elimination, there was only one choice for someone who could do all that ... I knew that [Rebecca] understood so much the themes I was trying to explore about being a woman, and the way that the gaze of others can define us and the ways in which we try to define ourselves, that search for our own voice and our own humanity.”

Though Reminiscence clearly takes place in a futuristic, dystopian version of our world, Joy was careful not to be too specific with her setting. “In the film, I don’t actually say what year in the future it is. That was really intentional for me because the future is catching up to us so quickly ... and I didn’t want it to feel like sci-fi set indefinitely far away. I wanted this film at its heart to be really relatable and really present ... because the future isn’t this distant thing, it’s here, and the things that we do right now form our world so quickly. There were these aspects of the film ... that I’m sure people will think at this point, ‘Oh, was this a reaction to this or that?’ [But] those all just came because that’s the world we live in. I think sometimes that science fiction has these connotations of futurism and the distant world, but for me what science fiction is, is a metaphor. It’s metaphor on a grand scale for the things that we are experiencing in this world, for the tremors that we feel underneath our feet that we know are going to become quakes at any moment. It’s a way of examining the world around us.”