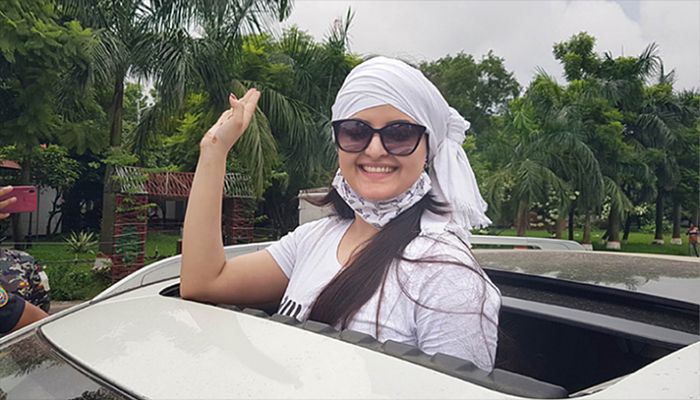 Actress Pori Moni waves at fans and reporters after she was released on bail from Kashimpur Central Women’s Prison in Gazipur on Wednesday, September 1, 2021. || Focus Bangla Photo: Collected

﻿The High Court on Wednesday expressed dissatisfaction over the explanation of two lower court judges, who had placed actress Pori Moni in police remand for multiple times in a drugs case, reports UNB.

A bench of Justices Mustafa Zaman Islam and KM Zahid Sarwar fixed September 29 as the next date of hearing.

In its observation, the High Court said, “The two lower court judges have submitted their explanation, which has undermined the High Court. The government has shown zero-tolerance against drugs.

"Pori Moni was arrested with foreign liquor and psychedelic drug LSD. Earlier, a student of Dhaka University committed suicide after taking LSD. In their explanation, the two judges said if they committed any mistake they did it simply.”

The judges also asked the investigating officer in the case to appear before them on September 29.

On September 2, the High Court asked the two lower court judges to explain why they had accepted the police prayer to remand actress Pori Moni for multiple times in the narcotics case.

The judges of Dhaka Metropolitan Court were ordered to submit their explanation to the High Court in 10 days.

The court had also summoned the investigating officer to appear before the bench on September 15 along with relevant documents to explain why he repeatedly sought remand for the actress.

The virtual bench of High Court passed the order after hearing a petition filed by Ain o Salish Kendra over the matter.

The bench said it would also summon the metropolitan magistrates who had granted the prayers for taking Pori Moni in remand for second and third times, if their written explanation was not satisfactory.

Besides, the High Court said there was potential for abuse of power in the remand of the actress.

ASK's lawyer ZI Khan Panna told the High Court during the hearing that its guidelines and directives were all thrown out of the window in the manner by which the actress was placed on remand in three phases.

Pori Moni was arrested on August 4 following a raid by Rapid Action Battalion in her Banani residence. A case was filed against her under the Narcotics Control Act the following day.

Following the High Court's intervention, a Dhaka court finally granted bail to the actress on September 1 and she walked out of jail the following day.

On August 22, Pori Moni was sent to jail after inspector of the Criminal Investigation Department Kazi Golam Mostafa produced her in a court on the completion of a one-day remand, her third.

Judge Emrul Kayesh set September 13 for hearing her bail petition in the case. However, the actress subsequently moved the High Court, challenging the validity of the lower court's decision.

The High Court on August 26 issued a rule, seeking explanation as to why a lower court order fixing September 13 for hearing the bail petition of Pori Moni in a case under the Narcotics Control Act should not be cancelled.

It had also asked why the bail application would not be heard within two days.