‘Hoyto-Noyto': A Satire On the Times 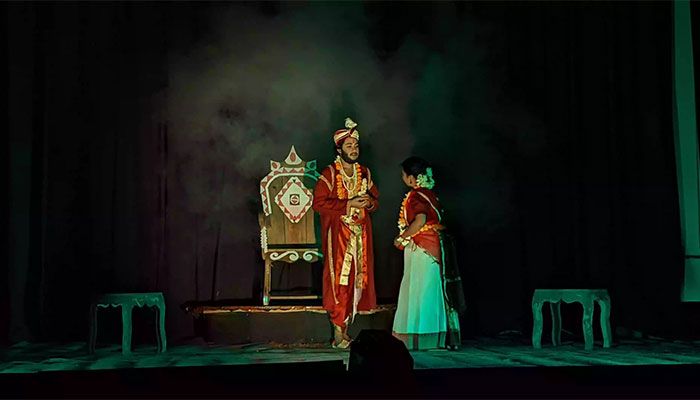 Once there was a fairy tale kingdom, where the king was so ataraxic about his tenants that he wasn’t even concerned about the existing crises like the food crisis and price hikes in the realm. The bureaucracy of the whole system, hiding money in the name of development, was responsible for these circumstances.

These things were ironically illustrated in ‘Hoyto-Noyto’, a drama staged at the Teachers and Students Cultural Centre of Rajshahi University (RU) on Monday (21 November, 2022) evening, reports UNB.

The stage drama was organized by ‘Samakal Natyachakra’ of Rajshahi University, where the members of the organization performed in the different characters of the fairy tale realm.

That was such a comedy-drama, where the irregularities were presented so ironically and in such a brilliant way that the spectators can relate these things with their surroundings.

In another part of that drama, the minister of the realm said that the taxes on ‘luxurious products’ like rice, oil, vegetables, salt, and sugar were increased. That’s how the authorities are solving the existing problems mocking the life of the mass people.

They also showed where and how the donations are gone in the name of mass people’s development.

However, the plot was written by Radharaman Ghosh and directed by Mithu.

‘Samakal Natyachakra’ of Rajshahi University was launched on 25 November, 1981. Since then, they have been producing more than 70 stage and street dramas.