India ramps up security ahead of verdict on Babri Masjid 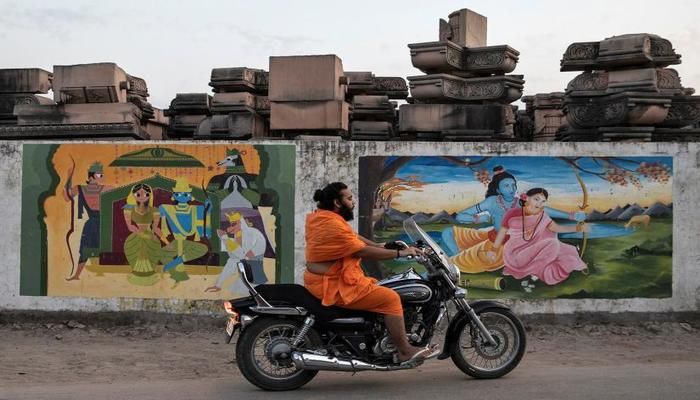 A Hindu priest rides past a workshop where the pillars that Hindu nationalist group Vishva Hindu Parishad (VHP) say will be used to build a Ram temple at the disputed religious site are kept, in Ayodhya, India, October 22, 2019. Photo: REUTERS

India has increased security a week before the Supreme Court rules on a disputed religious site that has been fiercely contested by majority Hindus and Muslims for decades, police and home ministry officials said on Friday.

More than 5,000 paramilitary force members and police have been deployed in the northern town of Ayodhya, where an ancient mosque was razed in 1992 by hardliner Hindus who believe the site is the birthplace of Lord Ram, a physical incarnation of the Hindu god Vishnu, reports Reuters.

The destruction of the mosque triggered religious riots in which about 2,000 people, most of them Muslims, were killed across the country and led to a series of court battles with various groups staking claim to the site.

The Supreme Court is expected to deliver its decision on who should control the site late next week and thousands of Hindu monks and devotees have been arriving in Ayodhya for the judgment.

At the same time, various government agencies are making their preparations to thwart any violence.

"Each and every security officer is committed to prevent minor skirmishes or large-scale riots after the court delivers its verdict," said a senior home ministry official in New Delhi,

"State governments have identified several schools to set up temporary jails if the need arises," said the official, who declined to be identified.

Hindu groups say a temple existed on the site before the mosque was built in 1528 by a Muslim ruler. Prime Minister Narendra Modi's Hindu nationalist party has long campaigned on a promise to support the construction of a Hindu temple on the site of the razed mosque.

Ayodhya is in densely populated Uttar Pradesh state, home to more than 5% of India's 200 million Muslims.

Provincial police chief Om Prakash Singh told Reuters that precautionary measures were in place and social media platforms were being monitored to track inflammatory posts ahead of the verdict.

"We will not tolerate Hindus or Muslims publicly displaying their reaction to the court verdict," Singh said.

Muslim clerics in the western states of Gujarat and Maharashtra called for peace meetings with Hindu leaders in communally sensitive areas ahead of Friday prayers.

Navaid Hamid, president of the All India Muslim Majlis-e-Mushawarat, the top forum for Islamic organisations, said thousands of Muslim religious leaders had vowed to maintain peace and harmony after the court verdict.

"The land can belong to Hindus or Muslims, but there will be no repeat of the 1992 communal violence," said Hamid.