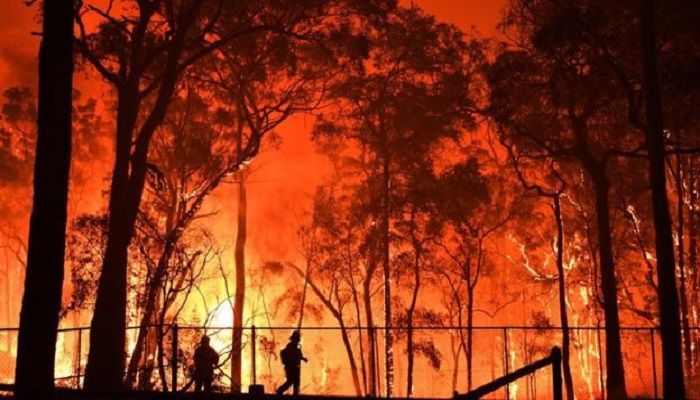 Fires continue to burn across New South Wales and Queensland

﻿Heat and winds are threatening to widen Australia's bushfire crisis, with three states warned to expect their worst conditions of the season so far.

Parts of Victoria have been issued the same warning for Thursday, while the threat in Tasmania is also increasing.

Six people have died since last month in massive bushfires which are burning elsewhere in the country.

Those blazes - in New South Wales (NSW) and Queensland - have destroyed more than 500 houses and prompted debates on the impacts of drought and climate change.

Fires in South Australia (SA) prompted emergency warnings on Wednesday as temperatures neared 45C (113F) in parts of the state, exacerbated by winds of up to 90km/h (55mph).

Officials switched off electricity to about 10,000 homes and businesses to reduce the risk of new fires. Such blazes are most commonly sparked by winds bringing down power lines.

"All areas of the state are in danger today, with the potential for fires which do start to be uncontrollable by fire crews," a Country Fire Service spokeswoman told the BBC.

The southern state has endured its driest first nine months of any year on record, said Australia's Bureau of Meteorology. No significant rainfall is forecast for the coming months.

Officials in Victoria have issued a "code red" - its equivalent of a catastrophic warning - for the state's north, warning residents there to evacuate immediately.

"Do not be there. If a fire occurs, you will not survive," said Steve Warrington, a local fire chief quoted by The Age newspaper.

Tasmania's threat level of "severe" - its most dangerous for the season - meant that any fire there would be difficult to control, officials said.

In NSW and Queensland, officials warned that forecast weather had the potential to intensify existing blazes. Western Australia was also issued catastrophic alerts in the past week.

Scientists and experts say that Australia's fire season has grown longer and more intense due to climate change.

According to the Bureau of Meteorology, climate change had led to an increase in extreme heat events and raised the severity of other natural disasters, such as drought.

As the fires rage on, Australia's conservative government has been criticized over its efforts to address climate change. Last year, a UN report said the nation was falling short of its Paris climate agreement commitments to cut CO2 emissions.