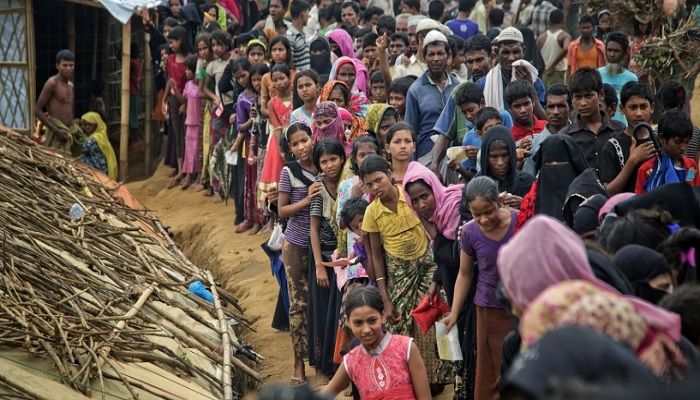 A series of legal cases filed in recent weeks at courts across the globe have heaped pressure on Myanmar to answer for alleged atrocities committed against Rohingya Muslims during a brutal military-led crackdown two years ago.

The office of Myanmar leader Aung San Suu Kyi said on Wednesday she would travel to The Hague for hearings in a case accusing the country of committing genocide. Human rights activists and lawyers are also pursuing several other avenues.

Hundreds of thousands of Rohingya fled to neighbouring Bangladesh to escape a Myanmar military offensive launched in August 2017 campaign that UN investigators described as a text book example of ethnic cleansing.

Soldiers, police, and Buddhist villagers are alleged to have razed hundreds of villages in the remote western Rakhine state, torturing residents as they fled, carrying out mass-killings and gang-rapes.

Myanmar has denied the allegations, saying security forces were carrying out legitimate operations against militants who attacked police posts.

More than one million refugees now live in squalor in camps in Bangladesh, too frightened to return to Rakhine for fear of further persecution and violence. Many say they want to see top military and civilian leaders convicted over alleged atrocities before they will consider going home.

Earlier this month the tiny majority-Muslim African nation Gambia filed a case accusing Myanmar of genocide at the Hague-based ICJ, in the Netherlands, on behalf of 57 member states of the Organisation of Islamic Cooperation.

Public hearings are set to begin in December, making this the first international legal challenge against Myanmar, which Gambia has accused of breaching the 1948 Genocide Convention by carrying out “mass murder, rape, and genocidal acts”.

The office of Myanmar state counsellor Suu Kyi said on Wednesday she would appear in person to fight the charges, with a team of international lawyers.

Gambia is expected to ask for emergency action to protect the Rohingya, several hundred thousand of whom remain in Myanmar confined to camps and villages in apartheid-like conditions.

The ICJ deals with disputes between UN member states and cannot prosecute individuals. The court has no way of enforcing its rulings but Myanmar could suffer further damage its reputation by failing to comply.

The ICC, the world’s only permanent war crimes court, also based in the Hague, authorised its chief prosecutor last week to begin a full investigation into alleged crimes against humanity, specifically the deportation of Rohingya from Myanmar.

Because Myanmar is not a party to the Rome statute that created the court, the U.N Security Council would normally have to refer it to the ICC – a move that Myanmar's neighbour and ally China would likely block.

But, the ICC set a major legal precedent by allowing prosecutors to investigate crimes committed against Rohingya in Myanmar because their were forced to flee to Bangladesh, which does recognise its jurisdiction. The decision could pave the way for similar probes affecting other countries that have not signed the Rome statute, like Syria.

Myanmar has refused to engage with the ICC, saying its jurisdiction was “meritless and should be dismissed”.

The court works notoriously slowly, but a verdict could result in prosecutions. It can issue arrest warrants but is dependent on national police forces in signatory countries to carry them out.

Rights activists also filed a separate lawsuit this month on behalf of the Rohingya in Argentina, citing the legal principle of “universal jurisdiction”, which holds that some acts are so brutal they can be tried anywhere in the world.

The lawsuit named military and civilian leaders including Suu Kyi and army chief Min Aung Hlaing as responsible for the “existential threat” facing the Rohingya.

Suu Kyi came to power in a landslide election victory in 2015 that brought an end to half a century of military rule. While Nobel prize winner Suu Kyi is the most recognisable figure in Myanmar, its constitution reserves great powers for the army, including control over the security forces and key ministries.

Courts in Argentina have previously tried probing other international crimes under universal jurisdiction, including cases related to the rule of Spanish dictator General Francisco Franco and the alleged persecution of the Falun Gong spiritual movement in China.

One of the Argentinian lawyers who submitted the lawsuit is Tomas Ojea Quintana, the former special envoy to Myanmar on human rights.

He travelled to Rakhine multiple times between 2008 and 2014 and has been vocal about the persecution of the Rohingya.

Suspects from Syria, Rwanda, various Latin American states, and the former Yugoslavia have been brought to trial under universal jurisdiction laws. Most of them were fairly low-level alleged perpetrators who were seeking refuge in the territory of the state invoking the principle.