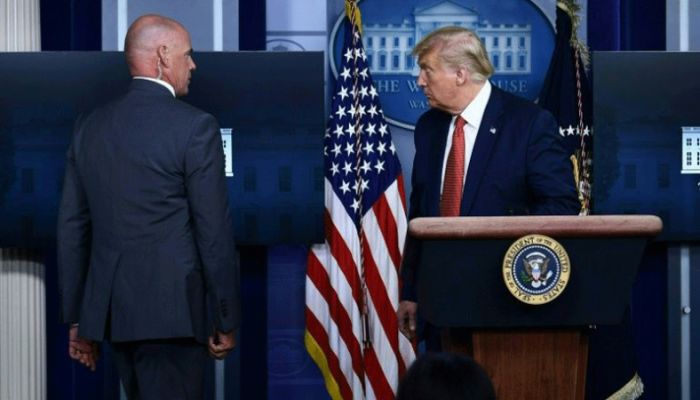 US President Donald Trump said someone was shot at the White House after being suddenly taken out of a news conference by a member of the Secret Service.

Mr. Trump told reporters that the event was "very much under control."

During his comments to reporters, a member of his security team came on stage and whispered in his ear, reports BBC.

Mr Trump was heard to say "Oh!" and "What's happening", as he left the briefing room. The White House was placed on lockdown during the incident.

During Monday's accident, the president was disrupted by a podium agent mid-sentence.

As he arrived only nine minutes later , Mr. Trump told reporters that he thought the US Secret Service (USSS) had fired a gunman who was armed "from what I understand."

He said that someone was taken to hospital after the incident.

Mr Trump acknowledged it was an unusual situation, but praised the professionalism of the USSS.

"It was a shooting outside of the White House," the Republican president said. "It seems to be very well under control.

"But there was an actual shooting, and somebody has been taken to the hospital. I don't know the condition of the person."

The USSS meanwhile tweeted: "The Secret Service can confirm there has been an officer involved shooting at 17th Street and Pennsylvania Ave.

It later added that "a male subject a USSS officer were both transported to a local hospital.

"At no time during this incident was the White House complex breached or were any protectees in danger."

Mr Trump told reporters he did not know if the suspect harboured any ill intentions towards him.

"It might not have had anything to do with me," the president said.

A journalist asked Mr Trump if he was rattled by the incident.

"Do I seem rattled?" he replied.

The president added: "It's unfortunate that this is the world, but the world's always been a dangerous place. It's not something that's unique.

He told journalists he was escorted to the Oval Office outside the briefing room during the incident.

Also led out of the news conference were Treasury Secretary Steve Mnuchin and Office of Management and Budget Director Russ Vought. The doors were locked.

According to the Local Press, the District of Columbia Fire Department announced that a man has sustained severe or likely vital injury.

The news agency also stated that the authorities were examining whether the person had a mental condition record.