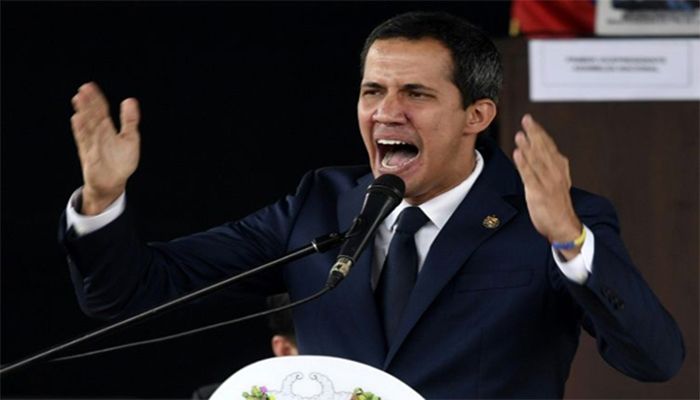 ﻿Opposition leader Juan Guaido of Venezuela called on the armed forces on Monday to back a boycott of the disputed legislative polls in December and to help increase foreign pressure on President Nicolas Maduro.

In a social media post, Guaido urged the military high command to enter an opposition forces' "unity alliance" to block the holding of the December 6 polls, reports AFP.

“Stop hiding behind the dictator’s skirts, stop ignoring the reality in Venezuela,” Guaido said in a message addressed to the high command, considered the main pillar of Maduro’s rule, along with allies Russia and Iran.

“We are willing to sit down once again with those who are needed to achieve a transition,” Guaido said.

Speaker of the National Assembly Guaido challenged Maduro's authority in January 2019 by declaring himself acting president, saying Maduro had robbed his 2018 re-election in a rigged vote.

The opposition has since attempted to displace Maduro unsuccessfully, including an abortive April 2019 military revolt organized by Guaido that failed to gain much support.

Guaido and leading opposition figures vowed to boycott the December 6 elections over a lack of transparency after the Maduro-friendly Supreme Court appointed election officials — a role that should have been conducted by the opposition-controlled legislature.

Some 37 opposition parties are backing the election boycott and a so-called pact proposing to “increase international pressure against the dictatorship,” according to Guaido.

But some popular opposition leaders, including Henrique Capriles, a widely regarded figure who has run twice for the presidency, have come out in support of inclusion in the polls.

Maduro's socialist government is threatened by a series of foreign sanctions, including a US oil embargo, and the US Department of Justice accuses him and his close associates of drug trafficking.

Venezuela is sitting on the largest proven oil reserves in the world yet, under Maduro's watch, the country has gone down into crisis.

Poverty has soared, inflation is the world's highest, and oil production in 77 years is down to its lowest level, which analysts blame for mismanagement and corruption.