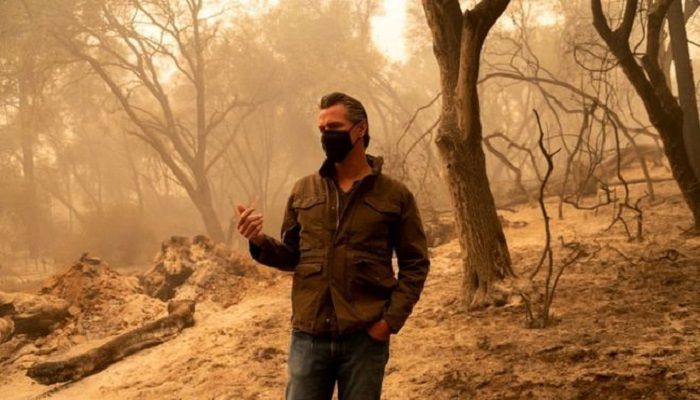 ﻿The deadly wildfires sweeping through US West Coast states show that the debate around climate change "is over", California Governor Gavin Newsom says.

"Just come to the state of California. Observe it with your own eyes," he told reporters from a charred mountainside.

The governor, a Democrat, spoke on Friday as he inspected damage from the North Complex Fire, near Oroville in Northern California.

"The debate is over, around climate change," Mr Newsom told reporters. "This is a climate damn emergency. This is real and it's happening."

He acknowledged failings in forest management in recent decades, but added: "That's one point, but it's not the point."

Highlighting the state's effort to combat climate change, he said the record heat waves and unprecedented fires were the sorts of problems long forecast by scientists.

Fires have been raging in California, Oregon and Washington for three weeks.

Fanned by winds amid record heat, the blazes have burnt millions of acres, destroyed thousands of homes, and killed at least 25 people.

The fires have burnt a total 4.5m acres - an area larger than Connecticut and slightly smaller than Wales - in recent weeks, according to the National Interagency Fire Center.

The North Complex Fire, which has been burning since 18 August, is among the deadliest in history. Ten bodies have been found so far and another 16 people are missing.