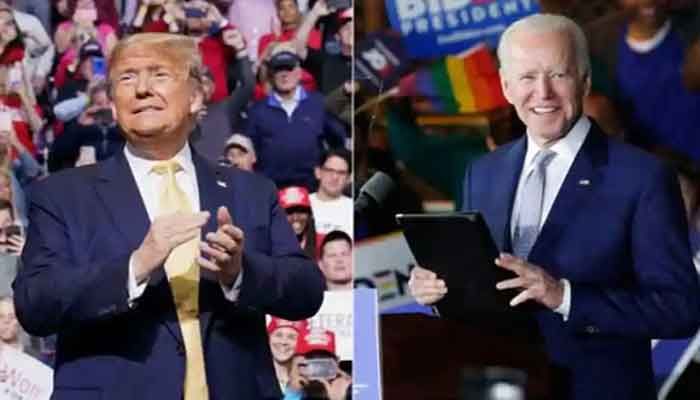 ﻿For the first time since testing positive for Covid-19, US President Donald Trump will make a public speech at the White House on Saturday as he prepares for a fast return to the campaign trail just three weeks before the election, reports BSS.

A Florida rally on Monday was also declared by the 74-year-old commander-in-chief in an effort to relaunch his failing reelection campaign against rising Democratic rival Joe Biden, who called the president's actions "reckless."

Trump declined to participate in next week's scheduled debate in an attempt to project strength and better health after organizers moved it out of coronavirus issues to an online format.

The Commission on Presidential Debates made it official on Friday, announcing that the debate next Thursday would be scrapped, leaving the last Trump-Biden clash on October 22 before election day on November 3.

That prompted accusations of bias from Trump campaign communications director Tim Murtaugh, who said “there is no medical reason to stop” the October 15 debate from proceeding.

The president, knocked off the campaign trail last week by his three-night hospitalization, is in the midst of a frenetic attempt to capture Biden.

Trump wrongly reported on Friday during an extended media blitz that Covid-19 now has a cure.

He also announced that at the worst of his battle with the virus, which has killed more than 213,000 Americans and seriously dented his chances of winning a second term, he had been told he was near death.

Saturday’s speech, which a senior administration official said would be on Trump’s favored theme of “law and order,” will give him a chance to dispel lingering doubts about his health.

The crowd will be on the White House's South Lawn, while the president will be speaking from the balcony.

A source with preparation experience said that all participants would be expected to wear masks and have their temperature tested.

On Monday, Trump will take another major step by holding a rally in a crucial battleground state.

“Will be in Sanford, Florida on Monday for a very BIG RALLY!” Trump tweeted.

The events come amid persistent concerns about how ill Trump was and how full his recovery is now, with officials from the White House declining to answer crucial questions, including when the president first contracted the virus and if he has since tested negative.

It is Biden who has barnstormed swing states this week after Trump spent months mocking Biden for sitting at home during the pandemic.

He visited Arizona Thursday and campaigned Friday in Nevada. Trump won both states in 2016 but they are now narrowly tilting Democratic in polls.

At a drive-in style event in Las Vegas, Biden slammed the president.

“His reckless personal conduct since his diagnosis, the destabilizing effect it’s having on our government, is unconscionable,” Biden said.

As he boarded his campaign plane he offered a message for those attending Trump’s public events: “Good luck. I wouldn’t show up unless you had a mask and were distanced.”

On Friday, Trump gave a marathon interview to right-wing talk radio host Rush Limbaugh in which he said the experimental Regeneron antibody cocktail that he took as part of therapeutic treatment was “a cure.”

It’s “a total game changer” and “better than a vaccine,” he said.

In fact, there is no cure and still no approved vaccine for the coronavirus.

He appeared later on Friday in his first TV interview after he was diagnosed with the virus, telling Fox's Tucker Carlson show that he is now "drug-free."

The president told Fox contributor Dr. Marc Siegel that he was screened again for Covid-19 in what the White House called an on-air "medical assessment," saying he did not know the "numbers," but "I know I'm either at the bottom of the scale or free."

It was not clear when the interview was filmed.

Trump has repeatedly asserted that he feels fine, and he has been backed up by statements from presidential physician Sean Conley.

But in his Limbaugh interview, Trump suggested for the first time that he had been close to death, had it not been for his aggressive regimen of therapeutic drugs.

“I’m talking to you today because of it. I could have been a bad victim,”

he said, adding that doctors told him: “You were going into a very bad phase.”

Polls show Biden leads heavily in key demographics including women and the elderly, prompting analysts to talk increasingly of a possible landslide victory.

Owing to his own illness, Trump 's greatest liability-overwhelming public dissatisfaction over his treatment of the pandemic-has returned as the main topic of the campaign.

In addition to the strain, Democrats running the House of Representatives announced plans for a commission to examine the fitness of a president for the job, a move obviously intended to leap at Trump.