No Good Or Safe Choices at Myanmar’s Election 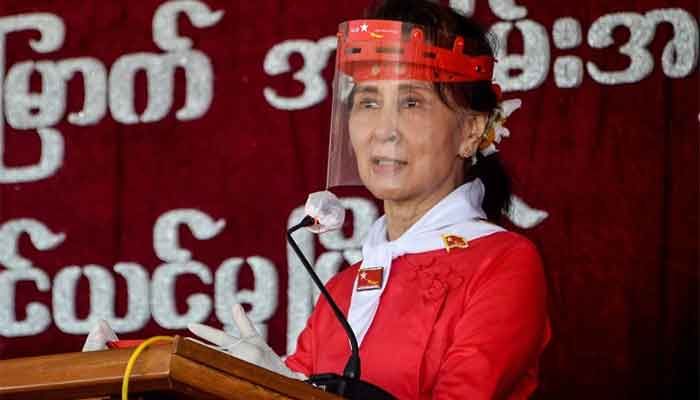 Amid terror, loathing and apathy, Myanmar is going to the polls, a hard turn from the political hope that infused the 2015 polls that catapulted the National League for Democracy (NLD) to power.

After decades of military rule, the historic election marked a return to quasi-democracy, with Aung San Suu Kyi, once a political prisoner and peace symbol, overwhelmingly elected as the de facto national leader, reports Asia Times.

But the democratic momentum has been lost, both by Suu Kyi and her NLD 's widespread perceptions of not achieving what they promised, and by a rapidly spiraling health crisis in Covid-19 that is expected to hold voters away from the polls.

That was expected when a mock election at a high school in the capital of Naypyidaw was organized by the Union Election Commission (UEC) to demonstrate how voting could be conducted in line with the coronavirus-curbing guidelines of the health authorities.

Among those who inspected the process were civilian leader Aung San Suu Kyi and her ministers, which included checking the temperatures of voters, providing facemasks, using hand sanitizers, and social distancing while lining up to vote.

This is what many polling stations will likely look like on November 8 when more than 37 million eligible voters will decide who represents them in both houses of parliament and sub-national assemblies alongside military-appointed MPs.

Despite calls by opposition politicians for a poll postponement, election officials say they plan to stick to the November 8 polling day, a position backed by the NLD. Voting in embassies abroad has already started.

A meteoric rise from the 887 reported on September 1, with nearly 24,000 Covid-19 infections, Myanmar has surged from just marginally infected to the fourth-worst hit in Southeast Asia, recently bypassing Malaysia. In the commercial capital of Yangon, two-thirds of the cases were found.

Myanmar’s election thus promises to be flawed on myriad fronts.

For one, it will be marred by ongoing and intense fighting between the Arakan Army insurgent group and the Tatmadaw in western Rakhine state, where over a million people are cut off by authorities from 3G and 4G internet services. The conflict will likely bar voting in many areas.

Nor will the vote be sufficiently checked and balanced. Foreign journalists and international observers are mainly blocked from entering the country to report and check the polls. Local reporters, meanwhile, face restrictions under lockdown measures that do not make allowances for non-state media reporters.

Yangon, Myanmar’s biggest city, is now eerily quiet after the government scrambled to impose a lockdown order to contain a surge of Covid-19 infections that authorities seem increasingly ill-equipped to contain.

The health ministry extended its closure of garment factories in the Yangon Region, originally set to expire on October 7, until October 21.

The lockdown is curbing election campaigning in many parts of the country. Covid-19 restrictions that prohibit mass rallies, free movement of vehicles and other campaign activities have taken the buzz out of the hustings. Suu Kyi and rival party leaders have opted for a campaign largely led by efforts to woo voters via the media and on Facebook.

Political parties this week presented their party platforms via state media, although some of their speeches were censored by the Union Election Commission for reasons it did not publicly elaborate.

Former army strongman Shwe Mann, who has since founded the Union Betterment Party, is seeking to portray his party as a middle ground between Suu Kyi’s NLD and the military-backed Union Solidarity and Development Party (USDP).

Tycoon and lawmaker Thet Thet Khine, who left the ruling NLD to kickstart the People’s Pioneer Party, has focused on the economy, including a pledge to raise incomes by 20% each year if elected and all her party proposals are implemented.

Suu Kyi, who was forced to call off her campaign launch in Yangon last month because of a viral resurgence, is now making controversial pork-barrel promises to win votes in Naypyidaw, including a vow to award senior civil servants, security forces and other state employees special, potentially tax-free import car licenses.

The campaign trail proposal was suspended earlier this year in the face of a public and industry outcry because it ran counter to her NLD’s clean government pledge and automotive policy.

In a rare move, the national automotive association and four European chambers of commerce held a press conference to criticize the policy on October 9.

Suu Kyi herself pledged not to give out car import permits for officials before entering government. The plan falls under the commerce ministry, which is headed by NLD member Than Myint and has been embroiled in several controversies.

However, Suu Kyi might need to worry more about lower voter turnout caused by Covid-19 than protest votes against her economic policy record.

Analysts say Suu Kyi needs a high turnout and resounding electoral win to push key reforms, including constitutional amendments to reduce the military’s political power and cement her legacy as a democratic reformer. At 75, it is not clear if she will run for another term beyond 2025.

On October 6, Suu Kyi gave a televised speech in her capacity as state counselor emphasizing the importance of voting.

“I want our citizens to understand that voting in the general elections is their duty; in the same way, abiding by the health rules and regulations to protect themselves of Covid-19 is also their duty as citizens,” she said, before pleading to the electorate not to over-worry about the virus.

In a virtual meeting with several NLD campaign leaders last month, the former Nobel Peace Prize laureate suggested that the integrity of the elections is more important for Myanmar’s future than the battle underway against the pandemic.

It’s not clear that’s how Myanmar’s voters feel, however. A pre-election survey conducted by local observer group People’s Alliance for Credible Elections (PACE) shows that voter interest in politics is at an all-time low since 2015.

Only 30% of respondents said they are interested in politics, the lowest percentage in five years. The figure stood at 43% in 2015 ahead of Suu Kyi’s landmark election win. The poll, conducted between August 3 and 5 with 2,577 interviews across Myanmar but excluding some ethnic areas, also revealed that the Covid-19 outbreak could dampen voting.

Only half of the respondents indicated that “they will definitely vote.” A third of them also said they are concerned about the pandemic in relation to the elections, while another third said there are no concerns or barriers for them to vote.

Opposition and ethnic party candidates have complained about how the health crisis could put voters off and how lockdown measures could favor incumbent NLD lawmakers, who face fewer restrictions in touring their constituencies as part of government Covid-19 prevention programs.

While the ban on mass rallies has added to the challenge of gauging Suu Kyi’s and her NLD’s popular support, her standing among the rural ethnic Bamar majority appears to have endured in her first term.

In ethnic states and urban middle-class areas, however, enthusiasm for her rule has waned due to poor governance, slow economic reform and a failure to achieve peace in the country’s long-running civil wars, her government’s signature national policy.

That disillusionment, however, may not translate into support for opposition parties. This is particularly true in urban areas, where the electorate’s main opposition, the pro-military USDP, is believed to remain highly unpopular.

When asked which party most closely represents one’s interest or opinion, 39% of respondents in the PACE survey chose the NLD, while only 7% selected the USDP. The USDP also topped the survey’s “unpopularity” category of 16 major parties, with 21% of respondents saying they have a negative view of it. The percentage for the other 15 parties stood at between 5% and 8%.

That’s an entrenched ill-perception of the previous decades of authoritarian and abusive military regimes that many here still hold chiefly accountable for the country’s economic plight and entrenched poverty.

But a perception of no good democratic choices is also taking hold. An online movement to boycott the polls altogether, originally at the margins on social media, has gained greater resonance since senior politicians, including Suu Kyi’s party deputy Zaw Myint Maung, publicly attacked their incipient campaign.

The UEC threatened legal action against those advocating a boycott, though it’s not clear how a “no-vote” campaign violates the election law. Suu Kyi is openly irritated by the increasingly pervasive boycott debate.

“To say, ‘I don’t like this or I don’t like that’ and to refuse to vote is a very irresponsible act,” she told government officials in an early August teleconference reported in media.

They have called for a boycott on elections until the military-drafted constitution, which grants the military 25% of seats in parliament, is amended more in line with democratic values. Suu Kyi’s NLD tried to amend the charter but was blocked by the military’s appointed bloc.

Significantly, no major party is overtly campaigning on the enfranchisement of marginalized ethnic groups, including the persecuted Rohingya. Authorities have barred most of the Rohingya still remaining in Myanmar, estimated at 600,000 and many in internally displaced person (IDP) camps, from registering to vote or run for office.

“We have no hopes at the moment. We used to have hopes for the NLD government in 2015,” said Brights Islam, a Rohingya who lives at an IDP camp on the outskirts of Rakhine’s state capital of Sittwe.

He said he expects the NLD to win nationally but does not think the elections will address the plight of IDPs or the one million Rohingya refugees stuck in camps in neighboring Bangladesh.

Islam voted in the military-orchestrated 2010 elections but, along with other Rohingya Muslims, was disenfranchised by then-president Thein Sein’s military-backed government ahead of the 2015 historic polls. Suu Kyi’s government has kept that policy of denying their votes in place.

“She [Suu Kyi] said she would solve the problem as much as she can … we had big hopes,” the Rakhine-native said, adding wistfully: “Our future is really dark.”