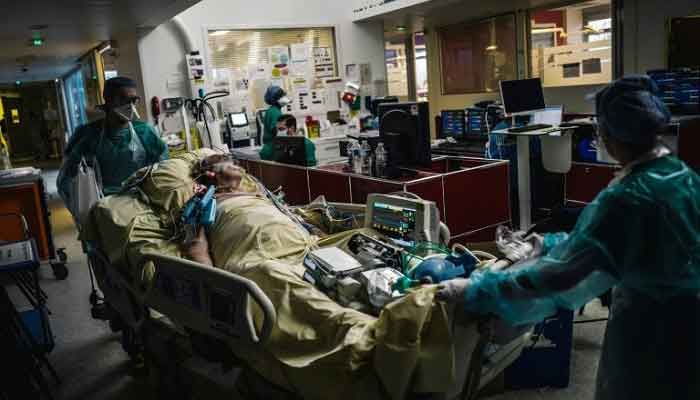 ﻿European countries have launched stringent new steps that the World Health Organization warned Thursday are of "great concern" to try to curb a spike in coronavirus infections.

Underlining the chaos wrought by Covid-19 also in the halls of influence, the running mate of US presidential nominee Joe Biden, Kamala Harris, suspended travel after a staffer contracted the disease and, for a similar reason, EU chief Ursula von der Leyen suddenly left the Brussels summit, reports AFP.

And in France, as part of an investigation into the government's handling of the coronavirus epidemic, police raided the health minister's home as new daily cases topped 30,000 for the first time.

A map released on Thursday by the EU's ECDC disease control agency gave a red label to more than half of the 31 countries it monitors, including non-EU members, for high rates of transmission and positive tests.

Millions in England are facing tighter controls, including a ban on household mixing, as the disease marches on relentlessly.

In the meantime, after the beginning of the pandemic, Queen Elizabeth II made her first public appearance outside a royal house, going unmasked during a visit to a top-secret British government research facility.

A curfew is to be imposed across the Channel in Paris and eight other French cities and there are new limits on people gathering at events in Germany.

The government of Poland urged people to operate from home if necessary, declaring a partial lockdown in "red" regions, including major cities, while Switzerland's health minister, Alain Berset, said the situation "is worsening faster than elsewhere."

Both countries are facing record levels of new infections.

Countries in many parts of the world are making difficult choices about how to contain the disease without the economic and social damage caused by national lockdowns, with almost 1.1 million coronavirus deaths and nearly 40 million infections worldwide.

Some cinemas were permitted to reopen on Thursday in India, where the pandemic has updated a movie-mad society, to try to draw punters back to the cash-strapped silver screen.

Israel, meanwhile, said it was lifting an unpopular ban on citizens flying out of the country in an easing of a second nationwide lockdown.

At a press conference in Copenhagen, the WHO's regional director for Europe Hans Kluge told reporters it was time to "step up the measures" as rising case numbers on the continent were of "great concern."

But he said the situation was not as bad as the peak in March and April, and stressed that full-on lockdowns "where every corner of our society and economy has been halted" should be avoided.

"The collateral damage on the people was too much," he said, encouraging governments not to "hold back with relatively smaller actions".

People's mental health, the possibility of domestic abuse and the welfare of children should all be taken into account, he said.

Britain hopes that a local three-tier structure would suit the bill, with London going to level two on the weekend and the only top-level location in the northwest city of Liverpool, with strict restrictions on social mixing, including the closing of pubs.

Police searched the home of Minister of Health Olivier Veran in France, one of many current or former ministers being investigated following allegations by Covid-19 victims that they were slow to respond to check its spread.

The action came after France declared a virus shutdown in Paris and other hotspot cities between 9 pm and 6 am that would stay for as long as six weeks.

In neighbouring Spain, bars and restaurants will close across the northeastern region of Catalonia for the next 15 days, while Germany said daily infections have reached levels not seen since the start of the pandemic.

Breaking with past practice, China has sought to avoid a major lockdown after an outbreak in the port of Qingdao, testing almost 10 million residents but allowing people to come and go as they please.

Countries across Africa -- which accounts for just over four percent of global cases -- have also eased lockdowns and travel curbs over the past month, but weekly cases and deaths have ticked up, according to the Africa Centres for Disease Control and Prevention.

"We are at a pivotal moment in the pandemic in Africa. While the continent has experienced a downward trend in its epidemic curve during the past three months, this decline has plateaued," the WHO's Africa director Matshidiso Moeti warned.

In India, Thursday's reopening of cinemas was tentative, with some states keeping theaters closed as the country's virus cases surge past seven million, and no new releases are offered by film studios.

Punters were few and far between, but some still made the trip to the cinema, "excited" to be back after months of coronavirus-imposed hiatus, like the businessman Chandrashekhar Naidu in Bangalore.

"I prefer watching movies on big screens, mobiles don't give you that much pleasure," the 55-year-old told AFP.

In the meantime, Japan is looking for ways to safely host mass sports activities ahead of next year's Olympics and will encourage baseball fans to cram into a near-full Yokohama stadium to test coronavirus containment measures.