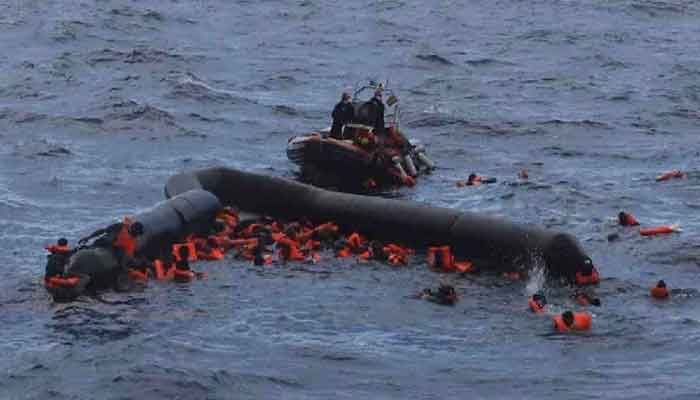 At least 74 migrants died in a shipwreck on Thursday off the coast of Khums, Libya, said the International Organization for Migration (IOM).

The boat was reported to be carrying more than 120 people, including women and children. "Forty-seven survivors have been taken to shore by the Coast Guard and the fishermen and 31 bodies have been retrieved while the victims' search continues," IOM said in a statement Thursday.

"The mounting loss of life in the Mediterranean is a manifestation of the inability of States to take decisive action to redeploy much needed, dedicated search and rescue capacity in the deadliest sea-crossing in the world," IOM Libya Chief of Mission Federico Soda said in the statement.

"We have long called for a change in the evidently unworkable approach to Libya and the Mediterranean, including ending returns to the country and establishing a clear disembarkation mechanism followed by solidarity from other states. Thousands of vulnerable people continue to pay the price for inaction both at sea and on land."

According to IOM, at least 900 people drowned in the Mediterranean while attempting to enter Europe by 2020 alone.

In addition, The Guardian notes that four shipwrecks in the span of three days have claimed the lives of more than 110 people in the Mediterranean, including at least 70 people whose bodies have been washed up on the beach of al-Khums in western Libya.

Taking advantage of the good mid-autumn weather, according to the charity, the smugglers sent hundreds of migrants to the sea last week. Most of the journeys have ended in tragedy.

On Wednesday, six people died after the dinghy in which they sailed with more than 100 migrants capped off Libya's coast.

“This is a massacre at Europe’s borders,” said a spokesperson for Alarm Phone, a hotline for migrant boats in distress. “What else can we say? We have called for radical changes for years and still the dying continues. It is devastating.’’

Open Arms wrote on Twitter: “Despite the enormous commitment of our medical team, a six-month-old baby has just died. We requested an urgent evacuation for him and other people in serious conditions, but he didn’t make it. How much pain and sorrow!”

The dinghy had allegedly left Sabratha, Libya, but began to deflate after a few hours. After a patrol aircraft from the European agency Frontex raised the alarm, the Open Arms ship promptly intervened.

“When our rescuers arrived, they found themselves in front of a dramatic scene,” Riccardo Gatti, the president of Open Arms Italy, said. “The boat had practically imploded and hundreds of people found themselves in the water, in the open sea – some were children.”

‘‘Change is necessary now, more than ever, to guarantee effective rescue at sea and prevent new tragedies,’’ said Flavio Di Giacomo, a spokesperson for IOM.

In 2020 alone, “over 10,300 migrants have been intercepted at sea and sent back to dangerous Libya”, Di Giacomo said.

According to IOM figures, since the beginning of October, at least 30 migrants have died at sea while trying to reach Italy.

Since the beginning of 2020, about 575 people have died in the central Mediterranean, but the real number is estimated to be considerably higher, IOM says.