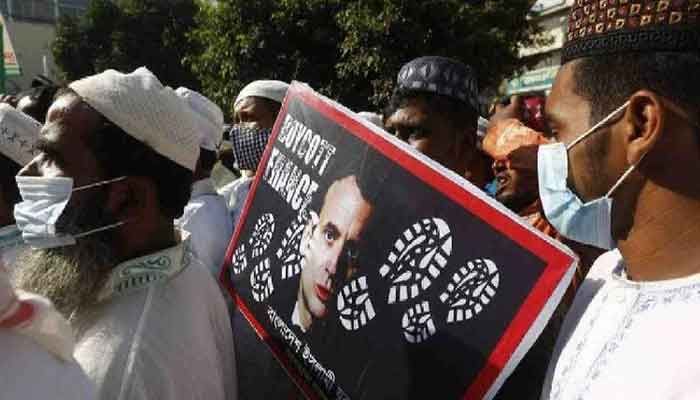 French President Emmanuel Macron has asked the country’s Muslim leaders to accept a charter of “republican values.” which states explicitly that Islam is not a political movement and prohibits “foreign interference” in Muslim groups.

The French president met eight leaders of the French Council of the Muslim Faith (CFCM) last Wednesday and asked them to approve the charter within 15 days, after which the latter agreed to establish a national council of Imams, which, local media stated, can issue and revoke official accreditation to Imams.

"Two principles will be inscribed in black and white [in the charter]: the rejection of political Islam and any foreign interference," reported Le Parisien newspaper.

Last month, 47-year-old French schoolteacher Samuel Paty was killed by Abdoulakh A, 18, after Paty showed his students the controversial caricatures of the Prophet Muhammad which were published in the French satirical weekly magazine Charlie Hebdo in 2015, making its Paris office the target of a terrorist attack that year that killed 12 people.

In September, the magazine, now based out of a hidden venue, republished the offending photos to coincide with the trial of the original attack in a court case. That seemed to provoke a reaction, as two people were injured in a knife attack near Charlie Hebdo's old headquarters in the 11th arrondissement of Paris shortly afterwards.

Macron had put himself in the crosshairs of Muslims around the world even before the Paty incident by suggesting on October 2 that their religion was mired globally in crisis, and even announced his proposal "to reform Islam" to make it more consistent with the republican principles of his country.

He has continued to speak out strongly against radical Islam and defended French secularism, stating that no matter how offensive they are considered, he will maintain the right to publish caricatures.

Macron said he could understand why Muslims were surprised by controversial cartoons portraying the Prophet Muhammad in an interview with the Qatar-based broadcaster Al Jazeera. At the same time, he stressed that the issue of justified aggression could never be recognized. The interview came after another deadly knife attack on a church in Nice that killed three people in just over a month, the third such attack in the world.

The tense reckoning France faces with its Muslim population - held to be the largest in Europe -  has been supplemented by a backlash from many Muslim-majority nations. French goods have been boycotted in parts of the Arab world, and Turkey’s president Recep Tayyip Erdogan asked whether Macron needed to have his 'mental health checked'.

Effigies of Macron have been burnt across the Muslim world, and Bangladesh has in fact witnessed the largest and longest-running protests, with crowds estimated upto 50,000 and above. They demanded the expulsion of the French ambassador, an end to bilateral ties, and boycott of French products. None of them were likely to be even considered, much less met. Starlet Nusrat Faria did though  chime in by parting with her Cartier wristwatch.

With the "Charter of Republic Values," revealed on Wednesday, Macron would seem to have played his hand with regards to what he may have meant with his comments on Oct 2.

The head of the French Council of the Islamic Faith, Mohamed Mousavi and the dean of the Paris Mosque, Shams El Din Hafez, attended the meeting, in addition to representatives of the nine federations that make up the CFCM. The CFCM is a nationally elected body which serves as an official interlocutor with the French state in the regulation of Muslim religious activities.

According to Al Araby, President Macron told the meeting attendees that "get out of this confusion" is important, saying he believes that a lot of them have unclear positions on some topics.

In addition to being able to grant permits to Muslim religious leaders, the newly formed Council of Imams would also have the power to revoke them if they are considered to breach the "Charter of Republic Values" to which Macron has requested them to consent.

Depending on the role of the imams, they will possess a certain fluency in the French language and possess university-level academic qualifications.

With the establishment of the National Council of Imams, Macron hopes to eliminate the existence within four years of 300 foreign imams from Turkey, Morocco and Algeria.