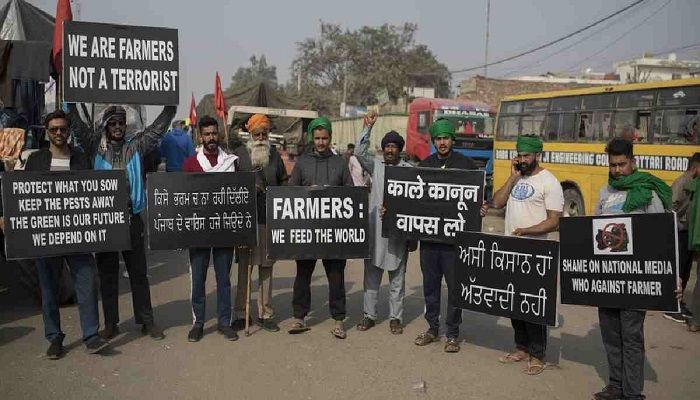 ﻿The Indian government and protesting farmers were unable to reach common ground in talks held Tuesday, with the farmers saying their demonstrations against new agriculture laws will continue as will their blockades of key highways.

The farmers rejected the government’s offer to set up expert committees to discuss the new laws, which deregulate crop pricing, even as the agriculture minister appealed for an end to agitation and invited the farmers for further discussions on Thursday.

“Our movement will continue and we will definitely take back something from the government — be it bullets or a peaceful solution,” Chanda Singh, a farmer leader who was part of the talks, told reporters in New Delhi.

Farmers have been protesting the laws for nearly two months in Punjab and Haryana states — where they have been blocking key highways. The situation escalated last week when tens of thousands of them marched to the Indian capital, where they clashed with police who used tear gas, water cannons and batons against them.

The farmers have since camped along at least five major highways on the outskirts of New Delhi and have said they won't leave until the government rolls back what they call “black laws.”

The farmers say the laws passed in September will lead the government to stop buying grain at minimum guaranteed prices and result in exploitation by corporations who will push down prices.

The laws add to already existing resentment from farmers, who often complain of being ignored by the government in their push for better crop prices, additional loan waivers and irrigation systems to guarantee water during dry spells.

The government has argued the laws bring about necessary reform that will allow farmers to market their produce and boost production through private investment.

Agriculture supports more than half of India's 1.3 billion people, but farmers have seen their economic standing diminish over the last three decades. Once accounting for a third of India’s gross domestic product, they now produce only 15% of GDP, which is valued at $2.9 trillion a year.

Prime Minister Narendra Modi and his allies have both tried to allay farmers' fears about the new laws while also dismissing their concerns. Some of his party leaders have called the farmers “misguided” and “anti-national,” a label often given those who criticize Modi or his policies.

Many opposition party leaders, activists and even some allies of Modi’s party have called the laws anti-farmer and expressed support for those protesting. The demonstrations have also started to draw international attention.

Canadian Prime Minister Justin Trudeau on Tuesday noted the protests and said "Canada will always be there to defend the rights of peaceful protest.”

“We’ve reached out through multiple means to the Indian authorities to highlight our concerns" Trudeau said in a video address without elaborating.

India’s Foreign Ministry did not directly name Trudeau but said comments by some Canadian leaders were “ill-informed” and “unwarranted.”

“Such comments are unwarranted, especially when pertaining to the internal affairs of a democratic country,” said Foreign Ministry spokesperson Anurag Srivastava.

On Tuesday, thousands more joined the protests at multiple locations on the outskirts of the capital. The farmers, driving tractors and trucks, brought food, fuel and firewood to sustain themselves.

“We are here to stay," said Manjeet Singh, a farmer who was part of a team making meals for the protesters. "We aren't going anywhere.”