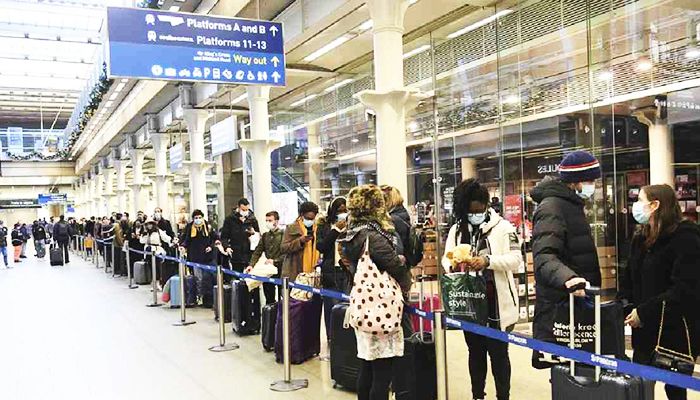 People at St Pancras station in London, waiting to board the last train to Paris today, Sunday, Dec. 20, 2020. Photo: AP

﻿A growing list of European Union nations and Canada barred travel from the UK on Sunday and others were considering similar action, in a bid to prevent a new strain of coronavirus sweeping across southern England from spreading to the continent.

France, Germany, Italy, the Netherlands, Belgium, Austria, Ireland and Bulgaria all announced restrictions on UK travel, hours after British Prime Minister Boris Johnson announced that Christmas shopping and gatherings in southern England must be canceled because of rapidly spreading infections blamed on the new coronavirus variant.

France banned all travel from the UK for 48 hours from midnight Sunday, including trucks carrying freight through the tunnel under the English Channel or from the port of Dover on England's south coast. French officials said the pause would buy time to find a ''common doctrine'' on how to deal with the threat, but it threw the busy cross-channel route used by thousands of trucks a day into chaos.

The Port of Dover tweeted Sunday night that its ferry terminal was ''closed to all accompanied traffic leaving the UK until further notice due to border restrictions in France.''

Eurostar passenger trains from London to Paris, Brussels and Amsterdam were also halted.

Germany said all flights coming from Britain, except cargo flights, were no longer allowed to land starting midnight Sunday. It didn’t immediately say how long the flight ban would last. Belgian Prime Minister Alexander De Croo said he was issuing a flight ban for 24 hours starting at midnight ''out of precaution.'' ''There are a great many questions about this new mutation,'' he said, adding he hoped to have more clarity by Tuesday.

Canada announced its own ban Sunday night. Prime Minister Justin Trudeau said in a statement that for 72 hours starting at midnight Sunday, ''all flights from the UK will be prohibited from entering Canada.'' He added that travelers who arrived Sunday would be subject to secondary screening and other health measures. A follow-up statement from the government said cargo flights were not included in the ban.

The British government said Johnson would preside at a meeting of the government's crisis committee, COBRA, on Monday in the wake of the other nations' measures. They come at a time of huge economic uncertainty for the UK, less than two weeks before it leaves the EU's economic structures on December 31, and with talks on a new post-Brexit trade relationship still deadlocked.

Johnson said Saturday that a fast-moving new variant of the virus that is 70% more transmissible than existing strains appeared to be driving the rapid spread of new infections in London and southern England in recent weeks. But he stressed ''there's no evidence to suggest it is more lethal or causes more severe illness,'' or that vaccines will be less effective against it.

On Sunday, British Health Secretary Matt Hancock added to the alarm when he said ''the new variant is out of control.'' The UK recorded 35,928 further confirmed cases, around double the number from a week ago.

The Netherlands banned flights from the U.K. for at least the rest of the year. Ireland issued a 48-hour flight ban. Italy said it would block flights from the UK until Jan.6, and an order signed Sunday prohibits entry into Italy by anyone who has been in the UK in the last 14 days.

The World Health Organization tweeted late Saturday that it was "in close contact with UK officials on the new #COVID19 virus variant" and promised to update governments and the public as more is learned.

The new strain was identified in southeastern England in September and has been spreading in the area ever since, a WHO official told the BBC on Sunday.

Viruses mutate regularly, and scientists have found thousands of different mutations among samples of the virus causing COVID-19. Many of these changes have no effect on how easily the virus spreads or how severe symptoms are.

British health authorities said that while the variant has been circulating since September, it wasn’t until the last week that officials felt they had enough evidence to declare that it has higher transmissibility than other circulating coronaviruses.

Patrick Vallance, the British government's chief scientific adviser, said officials are concerned about the new variant because it contained 23 different changes, ''an unusually large number of variants'' affecting how the virus binds to and enters cells in the body.

Officials aren't certain whether it originated in the UK, Vallance added. But by December, he said it was causing over 60% of infections in London.