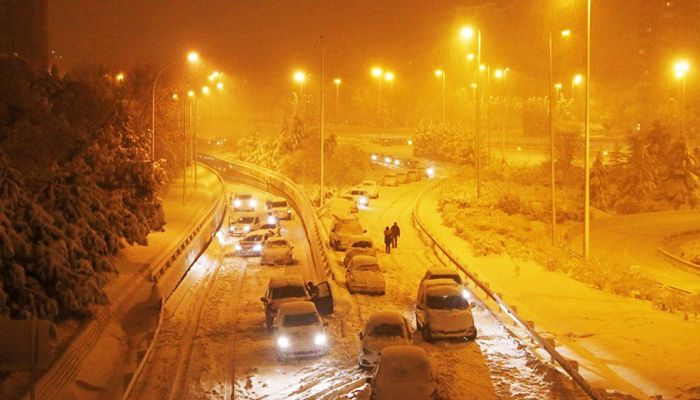 ﻿﻿Storm Filomena has blanketed parts of Spain in heavy snow, with half of the country on red alert for more on Saturday.

Madrid, one of the worst affected areas, is set to see up to 20cm (eight inches) of snow in the next 24 hours.

The city's airport has closed along with a number of roads

On Friday evening, a number of vehicles became stranded on a motorway near the capital.

According to local media, the snowfall in Madrid is the heaviest in at least 40 years. The country's AEMET weather agency said the snowfall was "exceptional and most likely historic".

A number of people were seen making the most of the snowy scenery, walking through Madrid's Puerta del Sol square.

Large parks in Madrid have since been closed as a precaution, AFP news agency reports.

One man was pictured skiing along the Gran Via, the capital's famous street, which is usually packed with tourists and shoppers.

In Cañada Real, the largest shanty town in western Europe, residents were seen creating a bonfire to keep warm.

The cold weather is set to continue beyond the weekend with temperatures in Madrid predicted to hit -12C on Thursday.