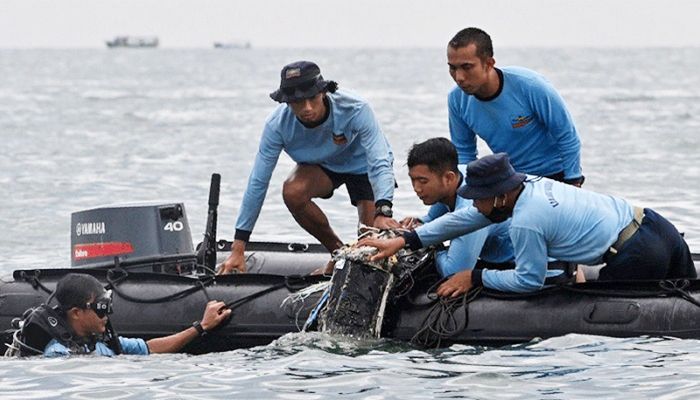 ﻿A device that Indonesia is using to locate the black boxes of the crashed Sriwijaya Airplane is suffering from "technical problems or equipment damage", say officials.

Authorities are waiting for a new "ping locator" to arrive from Singapore.

Sriwijaya Air's flight SJ182 left Jakarta with 62 people on board but vanished from the radar on its way to Borneo island on Saturday.

Divers have pinpointed the location of the flight data recorder and cockpit voice recorder, or black boxes as they are often called. These recorders store data about planes and can provide vital information in air accident investigations.

"The ping locator equipment that is being operated by the KNKT is experiencing technical problems or equipment damage," said the KNKT in a statement to BBC Indonesia on Tuesday. "So with these considerations... equipment assistance is urgently needed."

The Deputy Chairman of the KNKT, Haryo Satmiko, added that the committee had other equipment and qualified and trained personnel needed to carry out the search.

It is unclear how this latest development affects the search, but local television on Tuesday showed footage of divers still looking for debris and the black boxes.

What progress has been made so far?

Pieces of debris, body parts, wreckage and passengers' clothing have also been recovered by divers.

"There is so much debris down there and we have only lifted a few pieces. Hopefully, as we take out more [the recorders] can be found," Navy chief of staff Yudo Margono told reporters.

According to news wire AFP, there were some 2,600 personnel involved in the search operation yesterday, along with more than 50 ships and 13 aircraft.

Investigators are already analysing items which they believe to be a wheel and part of the plane's fuselage. A turbine from one of its engines is also among the debris that has been recovered.

Transport safety officials say they are currently in the second stage of a five-stage investigation process. This stage consists of compiling and collecting data and could take up to a year to wrap up.

What happened to the aircraft?

Minutes later, at 14:40, the last contact with the Boeing 737 plane was recorded, according to the transport ministry.

The usual flight time to Pontianak, in West Kalimantan province in the west of the island of Borneo, is 90 minutes.

There were thought to be 50 passengers - including seven children and three babies - and 12 crew on board, though the plane has a capacity of 130. Everyone on board was Indonesian, officials say.

The plane is thought to have dropped more than 3,000m (10,000ft) in less than a minute, according to flight tracking website Flightradar24.com.

Witnesses said they had seen and heard at least one explosion.

Sriwijaya Air, founded in 2003, is a local budget airline which flies to Indonesian and other South-east Asian destinations.

The missing aircraft is not a 737 Max, the Boeing model that was grounded from March 2019 until last December following two deadly crashes.