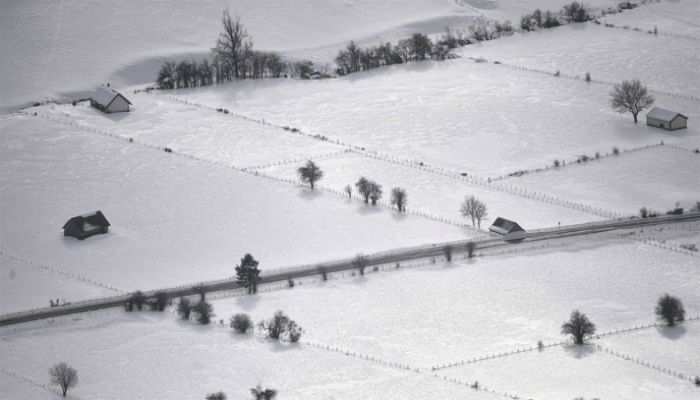 ﻿People in central Spain are struggling as the weekend's strong snow follows a deep freeze, leading to treacherous conditions.

The elderly have been warned by officials to remain at home.

At least seven people died because of the weather - in Barcelona, the two most recent casualties were homeless people.

The temperature plunged to -25C (-13F) in Molina de Aragón and Teruel, in mountains east of Madrid - Spain's coldest night for at least 20 years.

Deep snow left by Storm Filomena has turned to ice, disrupting transport. There has been an extraordinary quantity of snow and ice for Spain, where winters are usually quite mild.

Molina de Aragón, where the coldest overnight temperature was recorded, is 197km (122 miles) north-east of Madrid. It lived up to its nickname, "the Spanish Siberia".

"We're going to have this cold for a few more days, but we all pull together," local woman Yoli Asensio told the BBC's Guy Hedgecoe.

"Day-to-day life is difficult," she added. "There's so much snow about, the access to homes and roads is blocked. Some older people have had falls."

Besides the two deaths in Barcelona, at least five others are known to have died due to the cold: two in Madrid, two in Málaga and one in Zaragoza.

The overnight temperature in Madrid itself fell to -16C, and on Monday the capital's hospitals - already under great pressure because of Covid-19 - struggled to cope with patients who had slipped on the ice, breaking bones.

Medical sources told El Mundo daily that there were 1,200 fracture cases on Monday in the Madrid region's hospitals, caused by accidents on the ice - an average of 50 an hour.

The flood of emergency calls prompted the Madrid government to appeal to the elderly to stay at home.

The charity Save the Children reports that a power cut has left nearly 2,000 vulnerable children and their families without electricity in sub-zero temperatures at La Cañada Real Galiana, in the Madrid region.

A power cut also caused the suspension of the Madrid-Barcelona high-speed rail link, but the service has resumed now, Spanish media report.

Many commuter train services have been disrupted by the extreme weather.

Flights were suspended at Madrid-Barajas airport at the weekend, but they have gradually resumed, albeit with a big backlog and delays.

Spain's El País daily says the danger posed by icy road conditions has prompted what it described as "a titanic effort, something like a dystopian reality".

The paper reports that 1,300 snow-clearing vehicles are now operating and in 24 hours they managed to push snow off 12,100km of roads, to keep them ice-free.

A 64-year-old diabetic man who needed insulin urgently was located by an emergency helicopter in a remote area of the Toledo region, south of Madrid, after police were alerted. He was found struggling on crutches in the snow, and not suitably dressed for the freezing weather, Spain's Efe news agency reported.

In Hervás, western Spain, an emergency call led rescuers to a 39-year-old woman who had slipped on the ice while on a mountain path, with an ankle injury preventing her from walking.

In the mountains of Murcia, south-eastern Spain, a three-year-old dog missing since 20 December was found by a group of climbers and reunited with its owner. Rholo is an Alaskan Malamute - a tough breed, like a husky - and despite the snowstorm he was not seriously hurt by his three-week ordeal. He had shed 10kg and had sore paws.

"We would never have left your dog there, having heard his cries for help," the group told his delighted owner Ana María, Spanish ABC news reported.