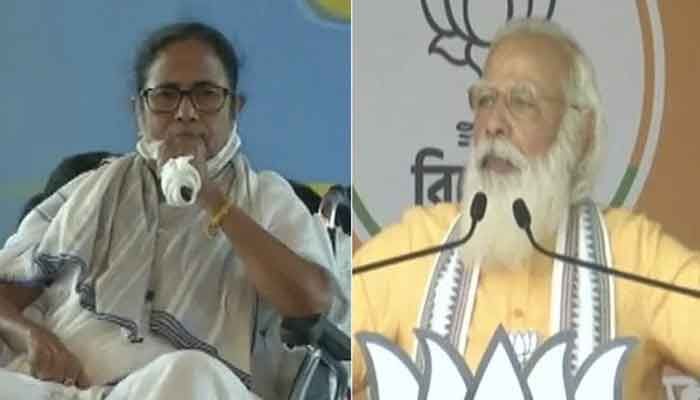 The ruling Trinamool Congress and the Bharatiya Janata Party (BJP) are locked in a very close fight in West Bengal where the counting of votes for the assembly elections began at 8 am on Sunday.

Days after polling in the assembly elections in West Bengal, Assam, Kerala, Tamil Nadu and the union territory (UT) of Puducherry was wrapped up, counting of votes began in these states and UT at 8am on Sunday. The exercise took place amid tight security in view of the coronavirus disease (Covid-19) and the results are expected to start rolling out after 5 pm, reports Hindustan Times.

Early trends at 9 am showed the ruling Trinamool Congress was leading in 55 seats while the BJP was ahead in at least 52 of the 294 seats. The coalition of Left parties, Congress and ISF was trailing at a distant third with three seats. The high-octane election campaign in these states was followed by voting that was spread out over a month. West Bengal voted in eight phases, starting March 27 and ending on April 29, while Assam voted in three. Elections in Tamil Nadu, Kerala and Puducherry were held in a single phase on April 6.

In West Bengal, the Bharatiya Janata Party (BJP) is contesting to wrestle the power out of the hands of three-time chief minister and Trinamool Congress (TMC) chief Mamata Banerjee. Assam will see a contest between the ruling BJP and a grand alliance of eight opposition parties including Congress, the AIUDF and the Bodoland People's Front.

The alliance of All India NR Congress and the Bharatiya Janata Party (BJP) is up against the Congress-led alliance in Puducherry.

West Bengal's battle is going to be the most interesting to watch as chief minister Mamata Banerjee aims to grab the post for a third term the BJP, which hasn't announced its CM face, is confident of winning over 200 seats.

Exit polls have predicted a close contest between the TMC and BJP, who trained guns at each other during massive election rallies that were later criticised for being conducted during the worrisome wave of the Covid-19 pandemic.

If Mamata Banerjee's TMC manages to hold on, it will a remarkable achievement as the party has been weakened by desertions, faced significant anti-incumbency, and appeared to be behind the BJP for much of the campaign.

Counting of votes for Assam's 126 assembly seats, contested by 946 candidates, has begun amid a nationwide crisis triggered by the second wave of Covid-19. Most exit polls have predicted a victory for the ruling party, the Bharatiya Janata Party (BJP) led alliance, in the state.

Besides the two main fronts, another front comprising two new regional parties, Assam Jatiya Parishad and Raijor Dal, was also in the fray.

The ABP-CVoter poll predicted a close contest with 58-71 seats to the BJP-led alliance and 53-66 to the Congress-led front.

The BJP maintains that it will win at least 85 seats, based on its own survey. The Congress has dismissed the exit polls as "biased" and "manipulated", adding the party will form the next government in the state.

In a statement issued late on Saturday evening, the Congress said it won't send spokespersons to TV studios for debates related to election results due to the current Covid-19 crisis. However, the party said its spokespersons will be available to answer queries over phone.