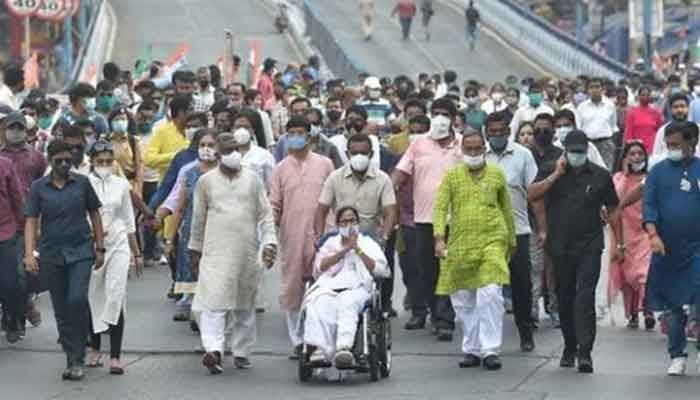 In political circles, across party lines, in Parliament corridors, among admirers and rivals alike, the most common description for Mamata Banerjee is simple in its scope but vast in its ambition. Talk to any leader who has worked with her, or fought with her, and half-grudgingly, their refrain is, "She is a fighter".

Didi, as Banerjee is known in Bengal and across the political class, is indeed a fighter — one who has taken on each of India's major national political streams, and won, reports Hindustan Times.

Banerjee first took on the Left, emerging as a giant-killer on the national stage after she defeated Somnath Chatterjee in the 1984 Lok Sabha elections. But unlike the Congress old guard in her state, Banerjee was not satisfied with token opposition to the Left government in her state. She took to the streets; she received blows and serious injuries; she relentlessly travelled and built her own parallel network of colleagues and workers who shared her zeal to take on the Left; she spotted a political opportunity in Nandigram and Singur and grabbed it; and by adopting the rhetoric of the Left, and claiming to speak for the poor and marginalised, she defeated the Left in 2011.

But before she did that, Banerjee fought the centrist political strand — represented by her own party, the Congress. Tired of internal factionalism, upset at efforts to sideline her, and convinced that the Congress would never seriously take on the Left because its larger national adversary was the BJP, Banerjee walked out to form one of the most successful splinter formations from the Congress, the Trinamool Congress and reframed the state's political grammar and contest.

And now, a decade after defeating the Left, Banerjee has defeated among the most serious challenges any regional leader in India has faced from the other end of the political spectrum. Remember, Banerjee was once an ally of the Bharatiya Janata Party (BJP), and even a minister in the Atal Bihari Vajpayee government. But both because of her own focus on the state and recognising that she could only defeat the Left by winning the Muslim vote, she distanced herself from the party. Over the years, Banerjee was seen as going the other extreme when she was accused of "appeasing" Muslims while in power — and indeed took some steps which would appear to substantiate this allegation. She also imported the undemocratic machinery of the Left to her own party, and was credibly accused of political coercion at the grassroots. Among other factors, these two issues enabled the BJP to grow in the state, culminating in the party winning 18 seats in West Bengal in the 2019 Lok Sabha elections.

And that is when Banerjee was sharp enough to course correct, hire Prashant Kishor as her adviser, step up her government's outreach to citizens through welfare schemes, tone down on what could be construed as "Muslim appeasement", play up her own Hindu roots, and stay focused even as key party leaders quit, resentful of Kishor and her nephew and heir apparent Abhishek Banerjee's influence. The 2019 course correction helped, and Banerjee, like she did with the Left and the Centre, defeated the Right in 2021.

This also makes it challenging to place Banerjee in a neat ideological box. She is secular — but has practised the politics of religion. She led an anti-industry agitation — but has also wooed private capital in her state. She is a welfarist — though there is an obvious element of party capture of the welfare schemes. She is a democrat — but she has also presided over political violence. She is single and projects herself as devoted only to Bengal — but now faces accusations of nepotism. She can be a competent administrator — but has also been responsible for allowing corruption in Amphan relief and taking her eyes off the ball during both the first and now second wave of Covid.

But while these contradictions may make for her complex personality, there is one thing on which there is little ambiguity, proven yet again on Sunday.

Didi is a fighter. A leader who has risen from the grassroots, she may well now aspire for a greater national role, be it in challenging the Centre on its policies and seeking a greater role for states, or in working with other non-BJP forces to create a political coalition for 2024. This, however, will bring its own challenges — for the last seven years have shown that success at the regional level may not translate into success at the national level.

But that is for the future. For now, Mamata Banerjee is the biggest winner of the state polls of 2021. With this renewed political mandate, emerging from the biggest electoral challenge of her career, Banerjee must move focus to the biggest policy and public health challenge of our times — managing Covid. The election, which brought her to power again, played a role in spreading the pandemic in the state, among other factors. And she now owes it to her voters to beat back the infection and provide relief to patients and their families. That will be her true test.

Topic : Global Mamata Banerjee She is a fighter Trinamool Congress BJP to grow in the state