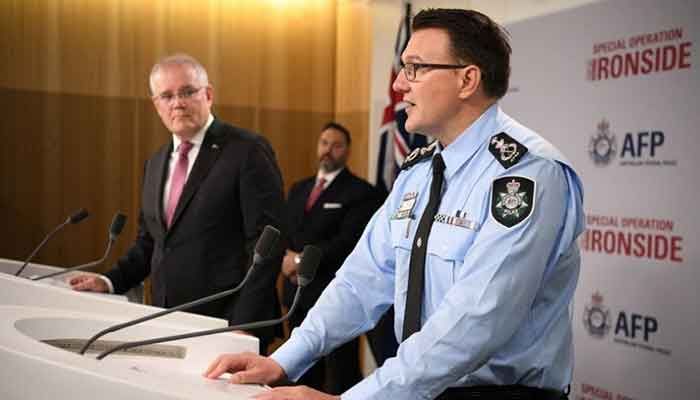 Since 2018, Australia, New Zealand, and the FBI have used an encrypted app, ANOM, to keep track of organised crime.

It has led to drug trade arrests in 18 countries across Asia, North and South America, Europe, and the Middle East.

"[It] has struck a heavy blow against organised crime - not just in this country, but one that will echo around organised crime around the world," he said in a televised press conference on Tuesday.

Australian and New Zealand police were among the first to reveal the sting on Tuesday.

Australian police said they jointly conceived the plan with the FBI. The US agency and Europol will present their own findings later on Tuesday.

The ANOM app had been one of the messaging services popular with organised crime gangs, authorities say.

How did it work?

New Zealand police said that after the FBI had dismantled two other encryption services, it began operating its own encrypted device company called Anom.

Devices with the chat app were distributed in the criminal underworld, reported Australian media.

Officers were able to read millions of messages in "real-time" describing murder plots, mass drug import plans and other schemes.

"All they talk about is drugs, violence, hits on each other, innocent people who are going to be murdered, a whole range of things," said Australian Federal Police commissioner Reece Kershaw in a press conference.

What did the authorities uncover?

Commissioner Kershaw said that in Australia, police had been able to intercept drug operations and prevent incidents such as mass shootings.

"Knocking out their communications has been a key part of us disrupting the organised crime," Commissioner Kershaw said.

He said the app access had given law enforcement "an edge that it had never had before", but added the platform was just one of many messaging apps favoured by organised crime gangs.

Topic : Global criminals across the world