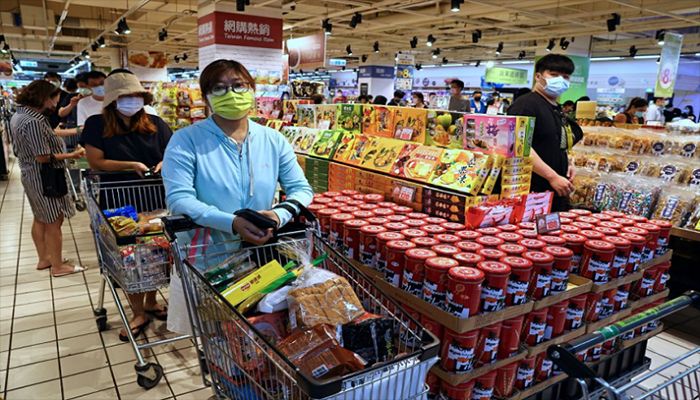 People wait to pay for their groceries after the government advised people to reduce leaving their homes and limit gatherings due to an increasing number of locally transmitted Covid-19 infections, in Taipei, Taiwan, May 15, 2021. || Reuters Photo: Collected

The global Covid-19 caseload is fast approaching another grim milestone of 224 million, with the world still struggling to contain the second wave of the pandemic.

The total caseload and fatalities from the virus stand at 223,798,048 and 4,616,196, respectively, as of Saturday morning, according to Johns Hopkins University (JHU).

Besides, as many as 260 new deaths due to the pandemic since Thursday morning took the total death toll to 4,42,009.

The country reported 58 Covid-related deaths and 2,588 cases on Thursday, indicating a slight increase in both cases and fatalities.

But the daily case positivity rate dropped a bit to 8.65 per cent from Thursday’s 8.76 per cent suggesting that the pandemic may be easing in Bangladesh.

The fresh numbers pushed the country’s total fatalities to 26,832 while the cases reached 15,27,215, according to a DGHS handout.

The new cases were detected after testing 26,878 samples during the 24-hour period.

Around 29,541 samples were tested on the previous day.

Besides, the recovery rate rose to 96.39 per cent while the case fatality remained unchanged at 1.76 per cent compared to the corresponding period.

The country last saw 54 coronavirus-related deaths on June 18 and the upswing in the fatalities reached its peak on August 5 and 10 when 264 deaths were recorded.

However, the situation was much more catastrophic than June and the latter part of August as the country experienced a surge in Covid-related caseloads and deaths during that time.