Pakistan's Nuke Physicist AQ Khan Was Villain to The West 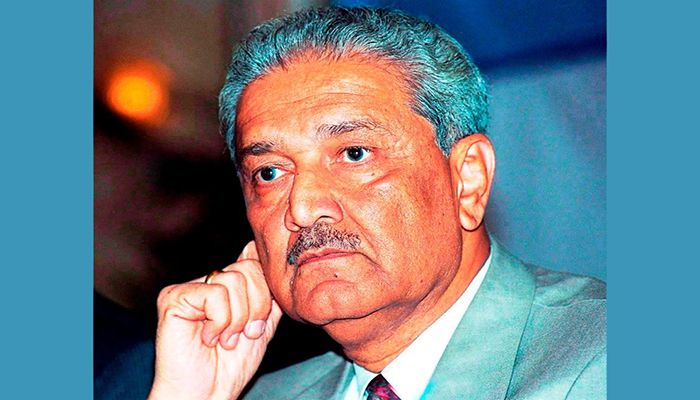 In Pakistan, he was praised for transforming the country into the world's first Islamic nuclear power. However, the West saw him as a dangerous renegade who was smuggling technology to rogue governments.

After being hospitalized with COVID-19, the nuclear physicist died at the age of 85 in Islamabad, Pakistan's capital.

He was hailed as a national hero for bringing the country up to atomic parity with India and for making the country's defenses "impregnable."

When he was accused of unlawfully proliferating nuclear technology to Iran, Libya, and North Korea, he found himself in the crosshairs of controversy.

After admitting to conducting a proliferation network to the three countries, Khan was placed under house detention in Islamabad in 2004.

He was diagnosed with prostate cancer in 2006 and underwent surgery, but he recovered.

In February 2009, a court lifted his house imprisonment, but he was nonetheless closely monitored and accompanied by police whenever he left his home in a quiet Islamabad neighborhood.

Khan was born in Bhopal, India, on April 1, 1936, and moved to Pakistan with his family after the traumatic 1947 partition of the subcontinent, which marked the end of British colonial control.

In 1960, he earned a bachelor's degree in science from Karachi University, then went on to Berlin to study metallurgical engineering before finishing postgraduate studies in the Netherlands and Belgium.

The procurement of a plan for uranium centrifuges, which convert uranium into weapons-grade fuel for nuclear fissile material, was critical to Pakistan's nuclear program.

He was accused of stealing it from the Netherlands and bringing it back to Pakistan in 1976 while working for Urenco, an Anglo-Dutch-German nuclear technical collaboration.

When Zulfikar Ali Bhutto returned to Pakistan, he put Khan in charge of the government's fledgling uranium enrichment effort.

Khan later stated in a newspaper interview that his team had enriched uranium by 1978 and was ready to explode a nuclear bomb by 1984.

Pakistan was hit with international sanctions after its nuclear test in 1998, which threw its economy into freefall.

Khan's star began to fade in March 2001, when then-President Pervez Musharraf dismissed him from the presidency of Kahuta Research Laboratories and appointed him as a special adviser, purportedly under US pressure.

However, Pakistan's nuclear establishment had not anticipated its most beloved hero to be questioned.

After receiving a letter from the International Atomic Energy Agency, a UN watchdog, alleging that Pakistani scientists were the source of sold-off nuclear knowledge, Islamabad took action.

Khan admitted to deals on foreign markets while constructing Pakistan's nuclear program in an address to the Pakistan Institute of National Affairs in 1990.

He explained, "It was not possible for us to manufacture each and every piece of equipment within the country."

‘I saved the country’

After his confession, Musharraf pardoned Khan, but he later withdrew his words.

"I saved the country for the first time when I made Pakistan a nuclear nation, and I saved it again when I confessed and took full responsibility," Khan said in an interview with the AFP news agency in 2008, while under house arrest.

The physicist considered nuclear defense to be the most effective deterrent.

In 1998, when Pakistan conducted atomic tests in retaliation to Indian tests, Khan stated that Pakistan "never desired to create nuclear weapons, but it was forced to do so."

Khan attempted his hand at politics nearly a decade ago, creating the Tehreek-e-Tahafuz Pakistan (Save Pakistan Movement) in July 2012 in the hopes of gaining votes based on the respect he still commands in Pakistan.

After none of its 111 candidates secured a seat in national elections, he disbanded the party a year later.

In the same year, Khan sparked a new scandal when he claimed in an interview with the Urdu newspaper Daily Jang that he provided nuclear technology to two countries on the orders of Benazir Bhutto, the dead Pakistani prime minister.

He didn't name the countries, and he didn't indicate when Bhutto, the twice-elected Prime Minister who was slain in 2007, allegedly gave the orders.

"I was not independent, but I was obligated to follow the prime minister's directives," he was quoted as adding.

The claim was dismissed by Bhutto's Pakistan Peoples Party as "baseless and untrue."

He authored op-ed pieces for the popular Jang group of publications on a regular basis, generally espousing the importance of scientific education.

His likeness can be found on the signs, stationery, and websites of many schools, universities, institutes, and charity hospitals across Pakistan.