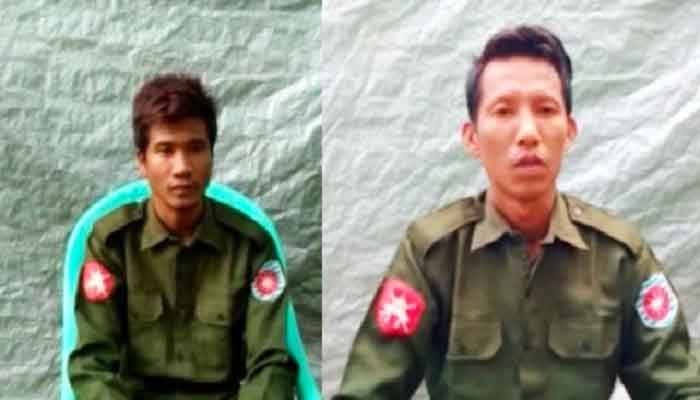 ﻿Two Myanmar military deserters say they were ordered to take part in the indiscriminate mass killing and rape of Rohingya Muslims in 2017, a human rights group claims, in video confessions which correspond with individual accounts given by survivors of the alleged atrocities.

The footage of the soldiers would represent the first admission by members of Myanmar's military that a campaign of violence against the minority ethnic group took place in the country's western Rakhine State. That campaign has previously been described by the United Nations and human rights organizations as having the "hallmarks of genocide."

The video confessions of Private Myo Win Tun and Private Zaw Naing Tun were filmed in July by the Arakan Army, a rebel group currently in combat with the Myanmar military, and released by the non-government organization Fortify Rights, which says it has analyzed the footage and found it to be credible.

"We destroyed the Muslim villages near Taung Bazar village. We implemented the clearance operations in the night-time as per the command to 'shoot all that you see and that you hear.' We buried a total number of 30 dead bodies in one grave," said Myo Win Tun in his video statement.

CNN has not been able to independently confirm the veracity of the video. It's unclear if the men made the video confessions under duress, after having been captured, or if they surrendered as deserters.

The two soldiers are believed to now be in the Hague at the International Criminal Court where an investigation into the Rohingya crisis is underway.

"This is a monumental moment for Rohingya and the people of Myanmar in their ongoing struggle for justice," Matthew Smith, the chief executive officer of Fortify Rights, said in a statement.

CNN has reached out to the Myanmar government and the Arakan Army for comment on the videos and the admissions made by the two soldiers.

From 2016, there have been reports of a campaign of mass violence by Myanmar's military in the country's Western Rakhine state, specifically targeting the Muslim minority Rohingya. More than 740,000 refugees poured across the border into Bangladesh, bringing with them allegations of indiscriminate killing, rape and property destruction.

The Myanmar government, led by Nobel Peace Prize winner Aung San Suu Kyi, has vehemently denied the allegations, telling the International Court of Justice in December 2019 that the claims were "incomplete and misleading."

It maintains the "clearance operations" by the military in Rakhine were legitimate counter-terrorism measures which began in response to a Rohingya attack on a border post which killed nine police officers. Myanmar has denied allegations of brutality.

Myanmar considers the one million or so Rohingya as illegal immigrants from neighboring Bangladesh, despite the fact that many Rohingya families have lived in Rakhine state for generations.

But a UN fact-finding commission described the violence against the Rohingya as "genocide." Doctors Without Borders has estimated that at least 6,700 Rohingya were killed within the first month of the campaign alone, including 730 children under the age of 5.

In the two videos released by Fortify Rights, filmed against a dark green plastic sheet, the two uniformed men describe in a matter-of-fact way how they were given orders to kill all Rohingya villagers.

Myo Win Tun said that he was sent on a night raid of a Muslim village in Buthidaung Township in August 2017, where officers told him to kill everyone in order to ensure that the Rohingya "race will be exterminated."

After destroying the first village, the soldier said his unit of 10 then stayed in the area for two weeks, razing other nearby settlements. "We buried a total of 30 dead bodies in one grave ... eight women, seven children, 15 men and elderly," Myo Win Tun said in the video.

He said his unit raped women before shooting them and admits to raping one woman himself. "We shot and buried people in village after village. It would be around 60 to 70 people in total," Myo Win Tun said.

In Zaw Naing Tun's video, he admitted to working with the 353th Light Infantry Battalion to wipe out "about 20 Muslim villages." "We shot dead and wiped them out according to the order to kill all, irrespective of children or adults," he said in the video.

A still image of a video filmed by the Arakan Army in July in which Myanmar Private Myo Win Tun confesses to participating in the mass killing of Rohingya Muslims in 2017.

Zaw Naing Tun said they had buried about 80 Muslim villagers in mass graves, stealing money, gold and mobile phones from their shops and houses after killing them, among other items. He also said he stood watch while his superiors raped women.

No member of the Myanmar military has previously admitted to widespread violence against the Rohingya in Rakhine state in 2016 and 2017. Very few members of the military have been prosecuted for killings in the region  seven soldiers were imprisoned in Myanmar in 2018 for a massacre at Inn Din village in Western Rakhine state, after it was exposed by press .

An investigation by Myanmar released in January found that some war crimes had been committed in Rakhine state, however it added prosecutions were ongoing and there was no "genocidal intent."

Shortly after the alleged confessions were filmed, the two soldiers appeared on the border between Bangladesh and Myanmar in August.

Fortify Rights said that it believes the two soldiers from the videos are now in the custody of the International Criminal Court (ICC) in the Dutch city of The Hague, potentially opening the possibility for their testimony to be used in a future case against the Myanmar government.

"These men could be the first perpetrators from Myanmar tried at the ICC, and the first insider witnesses in the custody of the court. We expect prompt action," CEO Smith said in a statement.

The ICC would not confirm to CNN that Zaw Naing Tun and Myo Win Tun were in custody.

"The ICC investigation is a confidential matter, all I can confirm is that two individuals appeared at a border post in Bangladesh, requested protection and confessed to mass murder and rape of Rohingya civilians during the 2017 clearance operations in Rakhine State," said Payam Akhavan, International legal counsel for Bangladesh and a former UN prosecutor.

"They claimed to have been members of the Myanmar military forces during that period and acting on orders from senior military commanders. Bangladesh informed the International Criminal Court, consistent with its obligations ... I am not able to confirm either their identity or their location," he said.

One Rohingya still inside Rakhine state, who asked to use the pseudonym Edin Hussein to avoid future persecution, said that the videos were a huge development which had made people "extremely happy."

"We have no words to describe how much we are happy that the two former militaries will be in ICJ to confess all the atrocities committed against Rohingyas by (the Myanmar military)," he said.

"Our people could not collect much evidence as they were shooting us on sight and most of our people rather had to flee and save life than facing the guns ... Finally we see a hope that the genocidaires will get punished for their crimes."