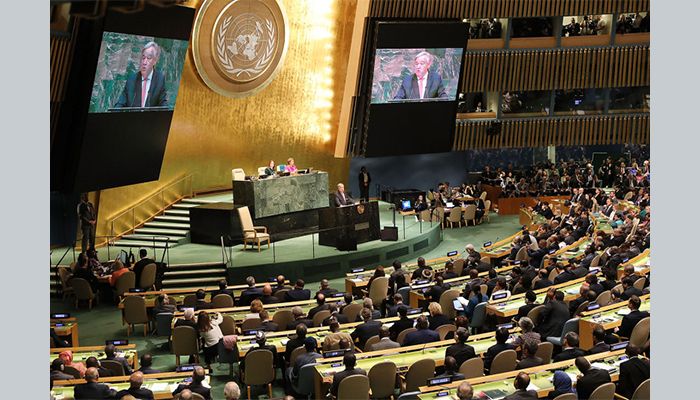 ﻿Bangladesh has thanked the international community for their unremitting support to the UN Resolution on ''The Situation of Human Rights of the Rohingya Muslims and other minorities in Myanmar'', which was adopted by the UN on Wednesday.

''As a country that hosts over 1.1 million forcibly displaced Rohingyas, Bangladesh continues to seek a peaceful solution to this crisis, which lies in their safe and dignified return to Myanmar'', said Ambassador Rabab Fatima, Permanent Representative of Bangladesh to UN.

This resolution will reinforce the calls made le Prime Minister Sheikh Hasina for an urgent solution to this crisis, the root of which lies entirely in Myanmar.

The resolution, co-tabled by OIC and EU received sponsorship from 104 member States, demonstrating strong and unified support in favour of the persecuted Rohingya Muslims and other minorities, who continue to suffer from human rights violations in Myanmar.

This year the resolution has taken some new developments into account, such as, provisional order of the International Court of Justice, initiation of investigation by the International Criminal Court and the issue of continued disenfranchisement of the Rohingya and other minorities, who were barred from participating in the recent general election in Myanmar.

The Resolution called for specific actions on the part of Myanmar, such as, addressing the root causes of the Rohingya crisis including granting them citizenship, ensuring safe and sustainable return of the Rohingyas to their homes by creating a conducive environment, including through confidence building measures such as addressing justice and accountability.

The resolution also expressed deep appreciation to the Government of Bangladesh, which under the leadership of Prime Minister Sheikh Hasina has demonstrated exemplary humanitarian gesture by sheltering and protecting the Rohingyas.

The efforts of Government of Bangladesh in tackling the spread of Covid 19 pandemic in the largest camp in the world was also recognised.

The resolution called international community to support Bangladesh in its humanitarian endeavor.

The Ambassador of Bangladesh expressed hope that, the resolution would create renewed pressure on Myanmar to address the Rohingya crisis by engaging with Bangladesh and other international actors in a constructive manner.

‘The ongoing justice mechanisms in respect of the human rights violations committed by Myanmar authorities will also enjoy greater support from the international community,’ added the Ambassador.

In their statements, they expressed hope that, this resolution will help address the longstanding plights of the Rohingya Muslims and other minorities by ensuring their basic human rights to return to their homes in safety, security and dignity, and will also help Myanmar overcoming the challenges it faces in its democratic transition.

They called Myanmar to take urgent actions to address the citizenship issue of the Rohingya minorities.

The UN resolution on Myanmar continues to remain an important source of international norms in guiding a desired solution to this longstanding Rohingya crisis.