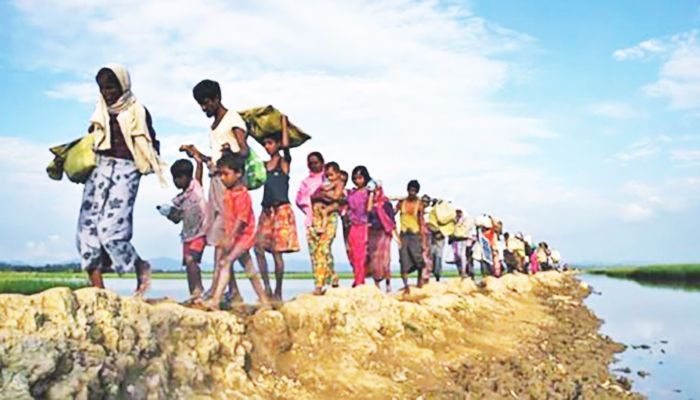 ﻿﻿Bangladesh, Myanmar and China will hold a tripartite meeting on Rohingya repatriation in Dhaka on January 19 as Dhaka finds their repatriation to Myanmar as the only solution to the crisis.

"We hope it would be a fruitful meeting," Foreign Minister Dr AK Abdul Momen told reporters on Wednesday about the tripartite talks.

He said the meeting will be held at the secretary level while such a tripartite meeting was last held on January 20 last year.

The Foreign Minister said Bangladesh has handed over a list of 8,40,000 Rohingyas to Myanmar for verification.

"Myanmar has verified very few people. They're very slow. They verified only 42,000 people. There is a serious lack of seriousness," said the Foreign Minister.

Dr Momen said they are doing their part of the job but Myanmar is not responding the same way.

Responding to a question, he said he is always hopeful of beginning repatriation as history says they took back their nationals in 1978 and 1992.

People live in hope and Rohingya refugees also do so and thus they spent another, 2020, that they would have a dignified return to their homeland in Myanmar. But, the hope for a better day did not come.

The government, earlier, hinted that the repatriation talks will begin this month as there was no Rohingya repatriation and discussion in 2020 as those collided with Covid-19 pandemic and Myanmar general elections.

Big countries find the repatriation of Rohingyas to their place of origin in Myanmar’s Rakhine State is the only solution.

More than three years ago, Myanmar’s soldiers “targeted, killed, and raped” Rohingya and burned their villages, as the United Nations, Refugees International, United States Holocaust Memorial Museum, the U.S. State Department itself, and many others have documented.

Over 800,000 Rohingyas fled the “genocidal violence” and Bangladesh is now hosting over 1.1 million Rohingyas.

“Though Myanmar agreed to take back their nationals after verification, no Rohingyas returned home. There is a lack of sincerity from Myanmar side,” Foreign Minister Dr Momen told UNB recently.

He said the Rohingyas do not trust their government, and Bangladesh gave a number of proposals to build trust among them. “Myanmar didn’t say no to those proposals but no proposal was implemented.”

Bangladesh is trying in multiple ways - bilaterally, multilaterally, tri-laterally and through the judicial system – to find a lasting solution to the Rohingya crisis.

“Myanmar is a friendly country. They aren’t our enemy. We’ve nothing against Myanmar. Myanmar must create a conducive environment as Bangladesh wants to see the return of Rohingyas to Myanmar in safety and security,” Dr Momen said.

''Myanmar did neither say yes or no on that particular proposal,'' said the Foreign Minister adding that Bangladesh also proposed visits of Rohingya leaders to Rakhine and Myanmar government officials’ visit to Rohingya camps in Cox’s Bazar to interact with the Rohingyas.

In the process, Dr Momen said, there should be confidence-building and the main objective of Bangladesh is to see the repatriation of Rohingyas. ''They must return home (Myanmar)''.

Responding to a question, Dr Momen said all countries agree that repatriation is the solution and any delay in repatriation might create instability in the region and beyond.