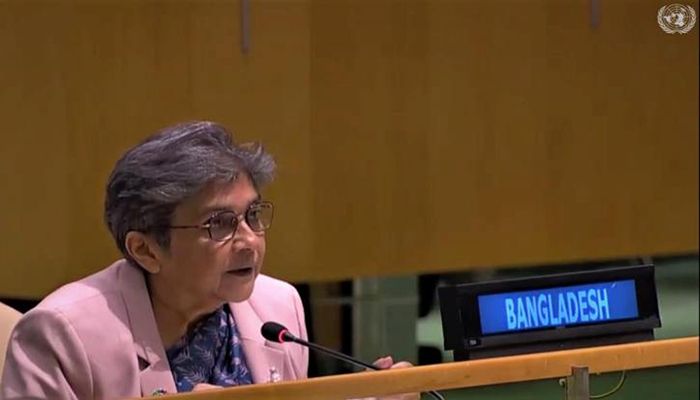 ﻿Permanent Representative of Bangladesh to the United Nations Rabab Fatima stressed the importance of adequate funding of the UN peacekeeping missions.

Ambassador Fatima made the call while speaking at the UN peacekeeping budget session in the UN headquarters, New York.

She had mentioned that a sufficient and sustained peacekeeping budget was critical for the peacekeeping missions to carry out their diverse mandates effectively.

''It is imperative to ensure that the peacekeeping missions are sufficiently funded,'' she added.

Ambassador Fatima underscored the need for timely reimbursement to the troops and police-contributing countries for their personnel and equipment support.

It may be noted that Bangladesh is the top troops and police-contributing country in UN peacekeeping operations with nearly 7,000 peacekeepers serving in 7 missions.

In her statement on Monday (April 3), Bangladesh PR urged the member states to take into account the impact of COVID-19 on peacekeeping operations and ensure sufficient allocation in order to allow the peacekeepers to cope with the challenges while considering the peacekeeping budget.

She praised our peacekeepers for continued efforts to fulfill their mandates in maintaining peace, stability and security in the conflict-prone countries and regions, despite the challenges of the pandemic.

Highlighting Sheikh Hasina Government’s endeavors in the context of woman's participation in peacekeeping, Ambassador Fatima said that increased participation of women in peacekeeping has been a key strategic objective of the National Action Plan on Women Peace and Security in Bangladesh.

She expressed concern about the low representation of women in peacekeeping operations, especially in senior leadership positions.

''We must continue to invest in our collective efforts towards full, effective and meaningful participation of women at all peacekeeping levels and positions,'' she added.

The fifth Committee of the UN General Assembly sits in May every year to consider the budget of UN peacekeeping missions.