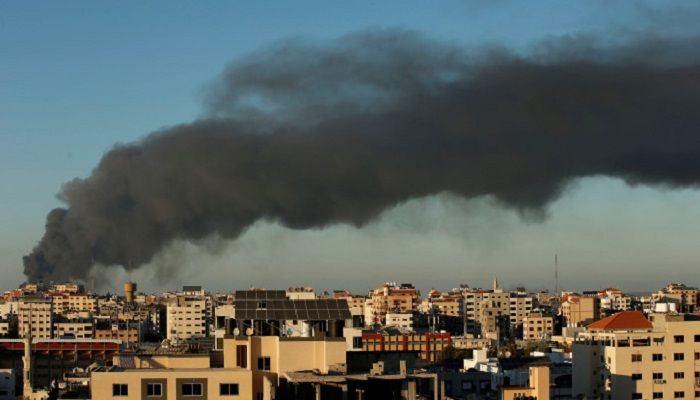 ﻿International efforts to de-escalate the biggest military confrontation between Israel and Palestinian militants in seven years intensified on Sunday as fighting continued unabated.

With the conflict stretching into its seventh straight day, the United States stepped up its diplomatic engagement and the United Nations Security Council met to discuss the conflict in public for the first time on Sunday, reports New York Times.

Secretary-General António Guterres was the first of nearly two dozen speakers on the agenda of the meeting, led by Foreign Minister Wang Yi of China, which holds the council's rotating presidency for the month of May.

"This latest round of violence only perpetuates the cycles of death, destruction and despair, and pushes farther to the horizon any hopes of coexistence and peace. " Guterres said. "Fighting must stop. It must stop immediately."

Palestinian and Israeli diplomats used the meeting as a high-profile forum to vent longstanding grievances, in effect talking past each other with no sign of any softening in an intractable conflict nearly as old as the United Nations itself, reports New York Times.

Riad Al Malki, the foreign minister of the Palestinian Authority, implicitly rebuked the United States and other powers that have defended Israel's right to protect itself from Hamas rocket attacks, asserting that Israel is then "further emboldened to continue to murder entire families in their sleep."

Gilad Erdan, Israel's ambassador to the United Nations, who spoke after Malki, rejected any attempt to portray the actions of Israel and Hamas as moral equivalents. "Israel uses missiles to protect its children," Erdan said. "Hamas uses children to protect its missiles."

Linda Thomas-Greenfield, The United States ambassador to the United Nations, said President Biden had spoken with Israeli and Palestinian leaders, while US Secretary of State Antony Blinken had also been engaging with his counterparts in the region. She called on Hamas to stop its rockets barrage against Israel, expressed concerns about inter-communal violence and warned against incitement on both sides, reports New York Times.

"The human toll of this past week has been devastating," she said, and added, "it's time to end the cycle of violence."

Netanyahu of Israel vowed late Saturday to continue striking Gaza "until we reach our targets," suggesting a prolonged assault on the coastal territory even as casualties rose on both sides.

In separate calls on Saturday, President Biden conferred with Netanyahu and Mahmoud Abbas, president of the Palestinian Authority, about efforts to broker a cease-fire. While supporting Israel's right to defend itself from rocket attacks by Hamas militants, Biden urged Netanyahu to protect civilians and journalists, reports New York Times.

Even before Sunday morning's attack, Israeli airstrikes had intensified over the weekend, with an attack on a house in a refugee camp in Gaza that killed 10 members of an extended family, including women and children, and another that destroyed a high-rise that housed media outlets including The A.P. and Al Jazeera.

Israeli defense officials said the building housed military assets belonging to Hamas and they provided advance warning to civilians in the building to allow evacuation. No casualties were reported in that strike.

At least 192 Palestinians had been killed in Israeli airstrikes and shelling in Gaza, including at least 58 children, according to Palestinian health authorities, and 12 Israelis had died in Hamas rocket attacks, reports New York Times.

Over the past week, the 15-member UN Security Council met privately at least twice to discuss ways of reducing tensions. But efforts to reach an agreement on a statement or to hold an open meeting had faced resistance from the United States, Israel's biggest defender on the council.

American officials said they wanted to give mediators sent to the region from the United States, Egypt and Qatar an opportunity to defuse the crisis.

But with violence worsening, a compromise was reached for a meeting on Sunday.

Security Council meetings on the Israeli-Palestinian issue have often ended inconclusively and served mainly as a platform for supporters of both sides to air their grievances. But they have also demonstrated the widespread view among United Nations members that Israel's actions as an occupying power are illegal and that its use of deadly force is disproportionately harsh, reports New York Times.