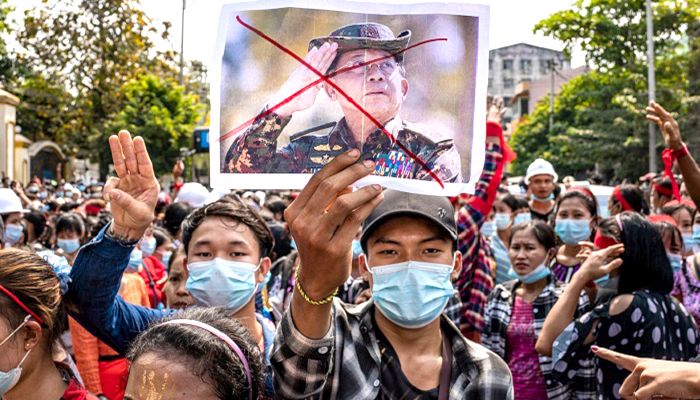 ﻿A UN human rights expert on Thursday welcomed the announcement of a new set of government sanctions against Myanmar’s junta by the United States, the United Kingdom and Canada, highlighting in particular the US designation of the junta itself, or the State Administrative Council (SAC) for sanctions.

''It is imperative that the international community ramp up the size and scope of sanctions as the junta ramps up its repression of the people of Myanmar,'' said Tom Andrews, the UN Special Rapporteur on the situation of human rights in Myanmar.

''This week the United States has taken one of the most significant steps to date against the Myanmar junta, first by sanctioning not only individuals but the State Administrative Council itself; and second, by opening the door to targeting those who continue to do business with the junta and therefore aid and abet their relentless attacks against the people of Myanmar.''

''The designation of the SAC strikes a new blow to the junta’s finances. It is a significant step in the right direction.''

As a result of the designation of the SAC under US Executive Order 14014, all United States nationals are prohibited from providing funds, goods, or services that benefit the State Administrative Council, according to a statement received from Geneva.

Additionally, transactions with, involving, or for the benefit of the State Administrative Council that are undertaken in US dollars are prohibited to the extent such transactions involve the US financial sector.

This means that not only US banks, but also non-US banks and other entities that undertake transactions with a U.S. nexus could face criminal and civil penalties in the United States if they willfully facilitate US dollar transactions for the benefit of the SAC.

The naming of the SAC paves the way for further designations of individuals or entities that are determined to have “materially assisted, sponsored, or provided financial, material, or technological support for, or goods or services to” the State Administrative Council.

“This is a warning to all those who are willing to conduct business as usual with the junta,” Andrews said. “Those who continue to aid and abet this murderous enterprise — be they international businesses, banks, arms traffickers, or government entities providing financial, technological or other support — are now on notice that they themselves could face sanctions.

“I am hopeful that this action will be a wake-up call.  Not only is doing business with the junta morally reprehensible, it could now mean being cut off from the U.S. financial system and/or facing criminal or civil penalties in the United States.  If doing the right and just thing is not a factor in one’s decision making, then perhaps protecting one’s self interest will be.”

Andrews also welcomed the new sanctions imposed on Monday by the United Kingdom and Canada, including sanctions targeting the junta’s profiting from the timber and gems trade.

“The coordination of these sanctions by the US, UK, and Canada is a welcome development,” the UN expert said. “Hopefully it will lead to a tough, fully coordinated multilateral sanctions regime that enables nations to deliver the most powerful blow possible against the horror that is being inflicted on the people of Myanmar.”

Andrews said, however, that more must be done, and done quickly.