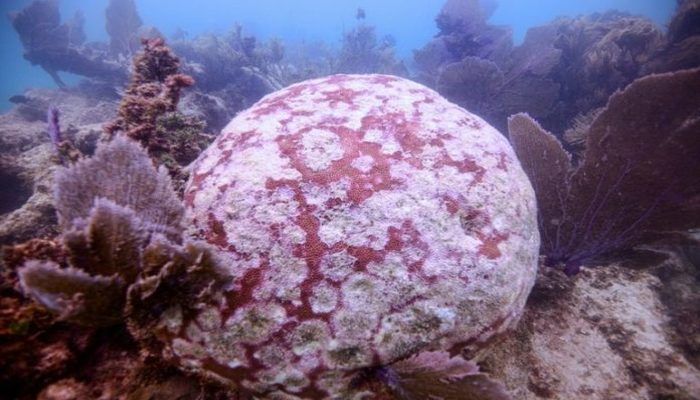 ﻿The breathtaking reds, yellows, and purples of the Mesoamerican Reef have been turning sickly white, leading researchers on a reckless hunt to understand and fight the mysterious disease killing the Caribbean’s corals.

In a little over a year, the Mexican Caribbean has lost more than 30 percent of its corals to a little-understood illness called SCTLD, or stony coral tissue loss disease, which causes them to calcify and die, reports AFP.
Experts warn the disease could kill a large part of the Mesoamerican Reef, a striking arc of more than 1,000 kilometers (600 miles) of coral shared by Mexico, Belize, Guatemala, and Honduras.
SCTLD has put the region in a bind: it could potentially crush the vital tourism industry around the reef, the second-largest in the world after Australia’s Great Barrier Reef.
And yet, it is highly likely that too much tourism is, in fact, fueling the problem, scientists say.
SCTLD, which has also been infecting coral off the coast of Florida since 2014, was first noted in the Mexican Caribbean in July last year, near the reef’s northern tip.
It has since spread 400 kilometers to the south, reaching Belize and causing more coral loss than occurred in the past 40 years in the region, according to the environmental group Healthy Reefs for Healthy People.
The disease takes just weeks to kill off coral tissue that took decades to grow, said Melina Soto, the organization’s coordinator in Mexico.
“If we keep going at this rate, this ecosystem is going to fall down in the next five to 10 years,” she told the news agency.
– Brink of extinction –
Scientists say SCTLD is even more dangerous than coral bleaching, another damaging condition that has affected reefs around the world, including the Great Barrier Reef.
Bleaching happens when environmental changes, such as warming ocean temperatures, cause corals — which are colonies of tiny animals — to expel the microscopic algae known as zooxanthellae that live inside them and give them their vibrant colors.
A reef can recover from coral bleaching if its environment recovers in time.
But SCTLD is fatal.
“It’s a complete detachment of the coral tissue, which dies and leaves behind a white skeleton,” said Claudia Padilla, a scientist at CRIP Puerto Morelos, a marine biology research center on Mexico’s Yucatan peninsula.
To the untrained eye, the impact of the disease is not highly visible yet.
“They looked marvelous to me. I would never have thought they were dying, like the experts say,” said Emanuel Fernandez, 34, an Argentine chemical engineer, after a snorkeling tour off the coast of Cancun, the region’s most famous resort.
But the impact is all too visible to experts.
“You used to go diving and see these thriving colonies (of corals). Now they’re all dead,” said Padilla.
Twenty-five of the region’s 40 coral species have been affected, she said. Of those, three are on the brink of going extinct in the region.
Researchers are currently building up a DNA bank of the endangered corals, hoping they can one day bring them back from extinction in the wild if needed.
– Too much tourism? –
Scientists are racing to understand what causes SCTLD.
One prime suspect is poor water quality, caused by sewage and a recent surge of decomposing sargassum seaweed — another environmental emergency in the region.
Another likely factor is the chemicals in tourists’ sunscreen, which the authorities have now banned.
“Many studies indicate that a particle found in sunscreen, oxybenzone, impedes the corals’ reproduction,” said Christopher Gonzalez, regional director for the national parks commission.
This month, authorities temporarily closed three sections of the reef, Palancar, Colombia and El Cielo, which receive thousands of visitors each year.
Now, government officials, the tourism industry and residents are forced to find a delicate balance: a level of tourism that will neither kill off the reef nor the economy.
Around 725,000 tourists have visited the Mexican Caribbean’s reefs so far this year, a similar figure to previous years, according to officials.
“If we lose the reef, we lose our main economic activity: tourism,” warned Maria del Carmen Garcia, head of the Coral Reef National Park in Puerto Morelos.