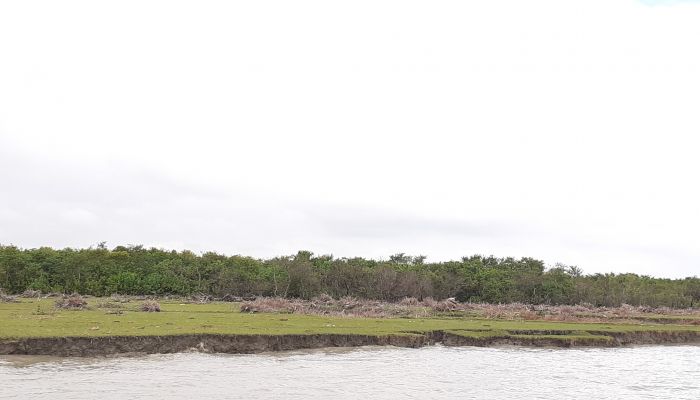 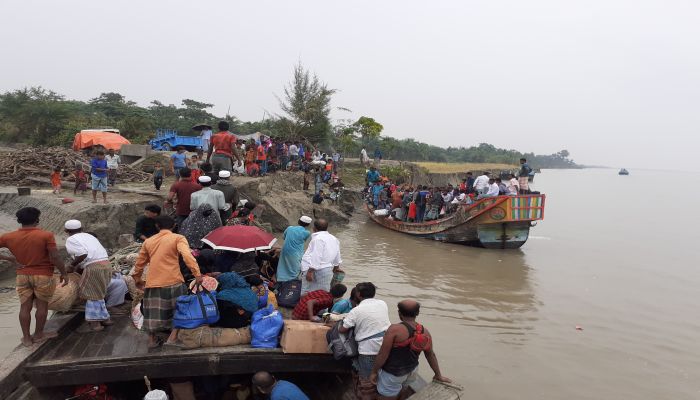 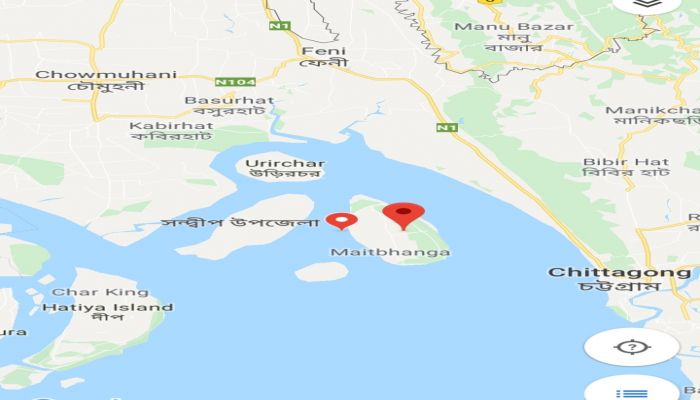 ﻿﻿﻿﻿﻿﻿﻿﻿﻿﻿Our boat was unrushed in the waveless water of the river. We were then at the mouth of the Meghna river. While transcending the border of Sandwip- an Island Upazila of Chattagram to reach another island, on google maps we found our position in the water chest very exciting.

At the rear of our boat is the newly awakened island Vasanchar where various activities are underway to rehabilitate the Rohingya.

To the west, there is a new char or climb nigh the terra firma of the Sandwip where I see as far as, the sight of greenery realm is concerned.

Shorna island on further west side locally known as Jahizarchar is under the control of the army. Howbeit, our destination visible in naked eyes is the greenery Urirchor. Seemed like very close to, yet the boat took two hours to take us there. For your kind information-there was a slight pause in the journey along the border of the Shorna island, and here too the greenery is quite fascinating.

In the seventh decade of the last century/ 1970's, Urirchor woke up on river Meghna adjacent to the waterbody of Noakhali and Chittagong. It is administratively a union of the island of Sandip. Cautionary signal 3 was reported that morning for cyclone, Bulbul. Delwar, Sharad, Mozammel and me- the four colleagues moved on without fear of the forthcoming disaster. Before reaching the island, we saw a glimpse of ere long greenery as plain as the nose on our face from the boat.

We celebrated walking along the main road leading to the bricklayer. Rows of colorful trees on both sides of the road. Were there also horizontal harvests, marshlands and a plethora of flowers.

On that day, the cautionary signal climbed to 6 in the afternoon. The cloudy sky and the gust brought down the night of anxiety. The possibility of hitting by Cyclone Bulbul in the coastal area of Sundarban was being reported in the news.

To our surprise, the very next morning there was no sign of disaster; no fear. Though the Meteorological Department sent a message of signal No. 9 on the coast of Chattagram. Wished to shorten the trip, but could not leave the island for our home in lieu of the boatmen's strike against the ferocity of nature. The feeling of fear and excitement of being trapped for 4 days on a new island at the point of disaster is never forgotten.

Rules of the boatman

Engineered boat is the only means of communication from Urichar to Upazila Sadar. The boat is operated once a day, so passengers will have to be back the next day. Because of tidal connection with it, both sides do the same thing. Only in the time of tidal flow can the boat move, otherwise the ebb helps the boat to get stuck.

According to the National Information Bureau, half a century ago, when Urirchor was waking up in the chest of Meghna, the people of Sandwip could see grass and grass. The grass is called 'Uri' in the local language. Thus the place has become Urirchor.

Story of the struggle

Interesting thing is that most of the inhabitants of the island are people of Sandwip; they came here to settle down losing their homes in the breakdown. Disasters and broken-downs as if are destiny in this town. The horrendous flood of 1987 caused severe damage here. And now the southern part of it is breaking down regularly. Two times sufferer Sandwip inhabitant Taluk mia's family had also suffered breakdowns three times here. In his own words, 'I fought three times'. Abdur Rahim, the acting chairman of the Urirchor Union Parishad has the same horrendous story to tell us or nobody. He regretted over the loss of ward no. 1 and 4 in the river.  The saddest matter still to know is that ward no. 5, 8 and 9 are in the train of fading away.

The northern part of the aisle has a border dispute. In Samitirhut, there a signboard and on it 'Noakhali Companyganj's Charwamed' is written. They claim that the area is part of Char Alahi Union. Since 2003, no union council election was held in Urirchor because of an existing case in the high court. It is very much convenient to travel to Noakhali comparing to the Sandwip and Chittagong.  As a result, many people of the island maintain their communication with the mainland through Noakhali.

What shall I say

The natural beauty of Urirchor has its own aroma. Spacious paddy fields, waterfalls are on either side of the road and flowers adorn the epic bills. Thousands of trees are in the highlands.  The island is rich in bills in which every family living there has herds of Bubalus bubalis popularly called buffalo; have their own land and pond as well. Sheep and goats are also seen. Most families are self-sufficient in the agrarian economy.

The most transparent problems

The main problems of 14,000 thousand people's island are emergency transportation, healthcare, and education opportunities.  In the southeastern part of the island, jungle forest or keoraban is scattered with a few kilometers wide. Even though it is in severe decline as it is decreasing day by day.

To set the seal on

On the night of the cyclone, we witnessed the fearless zeal of the people who were constantly battling the breakdowns. Despite the prevailing cautionary signal no. 9, the colony market, a local bazaar was full of people even at 9 pm; the usual time spent by story-sharing with tea.  Although three red-black flags of disaster warning are flying in the market; the sirens too are on. That moment I realized that this verve for staying constant even in the midst of a disaster is the key to sustaining their struggles with nature.