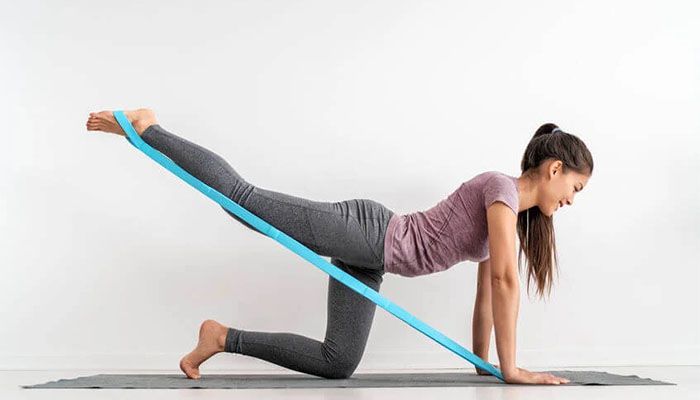 The benefits of resistance training — workouts that build strength and muscle — are well known. It reduces your risk of diabetes and heart disease. With more muscle, you burn more calories and are less prone to injury. It has also been shown to strengthen bones and reduce age-related decline in muscle mass.

Could resistance bands, which are relatively cheap, portable and easy to use, be a worthwhile alternative to a gym membership?

The idea of stretchy workout bands is over 100 years old. Some are long, thin tubes; some, like mine, are thick, flat loops with colours designating resistance levels. And they’ve seen a recent resurgence during the pandemic home-fitness boom.

Like weights, exercise bands put stress on the muscle, which over time makes the muscle adapt and get stronger. The farther you stretch the band, the greater the resistance.

There are some key differences though. Bands do not rely on gravity, so people cannot use momentum to jerk the weight into position, which can overload the joints and ultimately works less of the muscle, said David Behm, a professor and exercise scientist at Memorial University of Newfoundland’s School of Human Kinetics and Recreation. Bands also allow for movement on a number of different planes and axes, he said, whereas free weights limit you to mostly up-and-down movement.

Bands can engage the body’s major muscles just as well as weights, providing a full-body strength and endurance workout, said Todd Ellenbecker, a physical therapist at Rehab Plus Sports Therapy in Scottsdale, Arizona, and an author of the book “Strength Band Training.”

Research supports this. One study of middle-aged women compared 10 weeks of twice-weekly training sessions using elastic bands with a similar program that used weight machines. The women were tested for upper- and lower-body strength before and after the program, and results showed that muscle mass, strength and endurance improved at a similar rate in both groups. A systematic review of 18 studies also found no significant difference in muscle activation levels between those using elastic bands and those using free weights.

Ellenbecker said he works with athletes at all levels who exclusively use bands for resistance training, “and they are successful and injury-free.” But, as with any exercise, you need to be consistent with the exercise, he added. The American College of Sports Medicine guidelines call for strength training at least twice a week, with multiple exercises and multiple reps.

And don’t overdo it, he said. “People tend to gravitate toward bands that are way too strong, or they stretch them too far. It never hurts to start light and build yourself up.”

A well-placed band can improve your form

Gerard Burley, founder and owner of a Washington, DC, gym called Sweat DC, said exercise bands may be the best option for people new to strength training and can help you master good technique. For example, a common problem when doing a squat is that the knees buckle in.

“The body’s lazy and likes to take the easiest way out,” said Burley, who goes by Coach G. A mini band around your legs just above the knees helps prevent this. While squatting, focus on pressing the knees outward to keep the band from slipping, while keeping the head and chest up.

Advanced athletes use them too. For example, tennis players will often anchor a band to a wall or pole and loop the other side around the throat of their racket to add resistance and improve the power of their forehand, backhand or serve, Behm said.

Let them help you do a pullup

Exercise bands also provide assistance with hard-to-master exercises such as pullups, said Vanessa Liu, an online fitness trainer and nutritionist who uses them regularly with clients. In fact, certain bands are designed to loop around a pullup bar for extra support.

But don’t get too reliant on them. “Eventually, you’ll want to take off the band and do it yourself,” Liu said.

Use them to deepen stretches too. To stretch the hamstring, for example, lie on your back with the looped band around one foot and gently pull that leg toward you, keeping it as straight as you can.

Target the back muscles for posture

Mobility in the body is what allows you to bend over and pick up a box or sit and stand with ease. As we get older, the connective tissues in our joints change, making us stiffer and less flexible.

“People do mobility exercises with bands to improve posture, reduce stiffness and move more freely and fully,” Liu said. She often works with clients who have developed stiffness in the shoulders and neck from sitting at a computer.

For posture, Ellenbecker recommends an exercise he calls an “external rotation with retraction,” which works the rotator cuff muscles in the shoulder and the rhomboids in the upper back. Grasp the band in front of you with both hands and your palms facing up. Slowly move your forearms horizontally outward like you’re feeling under a desk, while lifting your chest and squeezing your shoulder blades together. Return to the starting position and repeat.

A word of caution: Bands can snap back into your face. Eye injuries have occurred this way.

To prevent this, be sure the band is securely attached to an anchor if the exercise calls for that, avoid pulling it directly toward the face or head and inspect it for nicks and tears before use. (You can purchase anchoring devices designed for use with bands. Securing a band by tying it around a stable object such as a tree, table leg or post can work well too.)

But in most cases, a snapping band poses little risk of injury. In fact, if someone breaks a band in Burley’s classes, everyone cheers.

As for me, I’ve been doing daily strength training with my mini bands for a few weeks now, and although it’s hard to tell if my posture is improving, I do feel stronger and genuinely enjoy my workouts.

A few exercises to get started

Here are five more exercises that could take the place of classic weightlifting exercises. With all of these workouts, aim for two to three sets, with eight to 12 repetitions (with good form) for each exercise, according to American College of Sports Medicine guidelines. If you have pain or past injuries, talk to your doctor before doing any new exercises.

— Glute bridge: Loop mini band just above the knees. Lie on your back with feet flat, and knees bent and shoulder-width apart. Lift your hips while pushing the knees outward until your body forms a straight line from shoulders to knees, and then slowly return to starting position. Repeat. Works the glutes and hamstrings.

— Row: Sit on the floor with legs extended, back straight. Loop the resistance band around the soles of your feet. Grip the band with your right hand, and pull it back toward your right hipbone while squeezing the shoulder blades together and keeping your back straight. Return to starting position. Repeat on the other side. Works upper back, middle back and biceps.

— Monster walk: Place the mini band around your thighs, above the knees. Bend hips and knees slightly. Keeping your head and chest up, take a step to one side while keeping the other leg pressed against the band. Keep moving sideways in one direction in a shuffling motion. Repeat the other direction. Maintain posture while stepping and keep the knees pushed apart. Works glutes and quadriceps.

— Deadlift: This works best with a long looped band. Stand on the middle of the band with your feet hip-width apart. A loop of the band should be poking out from under the sides of each foot. Squat down and grab each loop. Start the movement by bending at the hips with your back flat and shoulders above your toes. Keeping your back flat, stand back up. As you stand, the resistance should increase. Return to the starting point by bending at the hips. Works legs, glutes and core.

— Lying chest press: Lie flat on your back with a long band under the shoulder blades. Grasp the end of the bands and, with elbows bent and fists toward the ceiling, extend your arms fully, pushing upward as you stretch the band. The movement is similar to a chest press with dumbbells or a barbell. Works biceps, triceps and chest._The New York Times