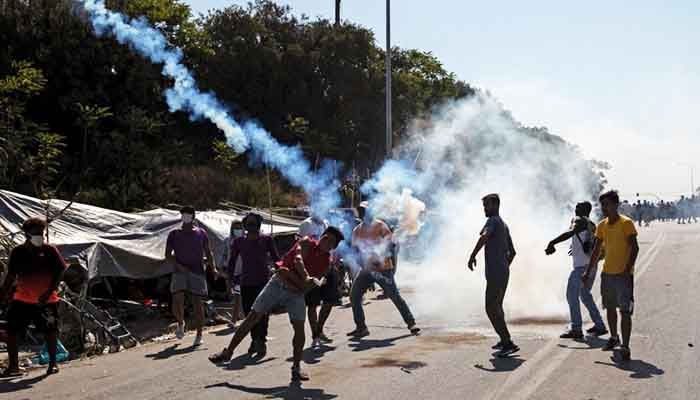 ﻿Police on the Greek island of Lesbos fired tear gas at agitating migrants who were left homeless after their camp was burned down on Wednesday.

Around 13,000 desperate migrants and refugees had been living in squalor in the overcrowded Moria camp.

The clashes broke out near a temporary facility built by Greek authorities.

Earlier in the day, A fire was set out near a police blockade and had to be extinguished by firefighters.

Families have been sleeping in fields and roads after fleeing the blaze on Wednesday.

The Moria camp was initially designed to house 3,000 migrants. People from 70 countries had been sheltered there, most from Afghanistan.

On Friday, migrants and refugees approached police barriers blocking the road out of Moria camp, holding signs calling for "freedom" and opposing the construction of a new camp.

There is also strong resistance from the island's permanent residents for a new camp, and they have been blocking roads to stop aid deliveries.

The question of how to deal with mass arrivals of migrants, mainly to Italy and Greece, has divided the Europian Union for years.

Italy and Greece have accused wealthier northern countries of failing to do more, while a number of central and eastern nations are openly resistant to the idea of taking in a quota of migrants.