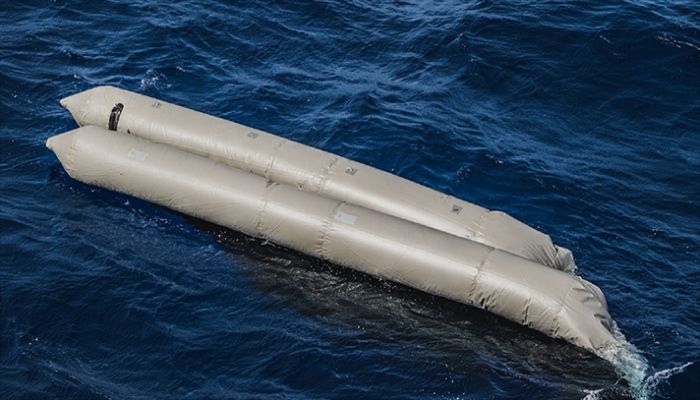 A rubber boat is seen after having capsized with more than 100 migrants on board, during a search and rescue (SAR) operation in the Mediterranean Sea, off the Libyan Coast on April 22, 2021. Reuters photo: Collected

﻿Ten people were found dead in an overcrowded ship carrying migrants off the coast of Libya, and were believed to have suffocated, the Doctors Without Borders charity has said.

The charity said late on Tuesday that its Geo Barents rescue ship had picked up 99 survivors earlier in the day, reports AFP.

"At the bottom of the overcrowded wooden boat, 10 people were found dead," tweeted the charity, known by its French initials MSF.

It described them as "10 avoidable deaths... 10 persons who died from suffocation, after 13 hours adrift at sea. The deadly central #Med route. How can we accept this in 2021?"

Tens of thousands of people seek to enter Europe each year via the central Mediterranean, leaving from Libya and Tunisia and heading most often for Italy.

The route is deadly -- 1,236 people have died in the central Mediterranean so far this year, compared with 858 in the same period of 2020, according to Flavio Di Giacomo of the UN's Migration Agency, the IOM.

He tweeted that the Geo Barents rescue "probably avoided other victims", saying it showed "the need to increase patrols at sea".

MSF said there were currently 186 people on board Geo Barents, including women and children, the youngest of whom is 10 months old.

"Many of them seem traumatised by the horrendous ordeal," it said, calling for a safe port to disembark them.