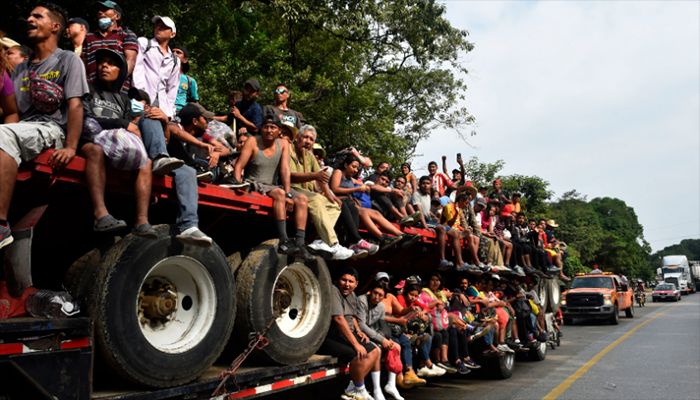 Migrants who were heading in a caravan to the US, travel in a truck in Nuevo Morelos, Jesus Carranza municipality, Veracruz state, Mexico, on November 17, 2021. || AFP Photo: Collected

Some 600 migrants from 12 countries, including Bangladesh, were rescued in Mexico as they travelled crammed into two tractor-trailers, the country's National Migration Institute said on Saturday, reports AFP.

The 145 women and 455 men, who hailed from not only Central America but also Africa and the Indian subcontinent, were found in the southeastern state of Veracruz, the institute said in a statement.

The vast majority were from Central America with 401 from Guatemala alone. Dozens were from Honduras and Nicaragua while a total of 37 were from Bangladesh, six were from Ghana, and one person was from India and Cameroon, the institute added.

The migrants were travelling "crammed" into the trailers of two trucks, said Tonatiuh Hernandez, the local head of the Human Rights Commission.

"There are children, minors, I saw pregnant women, sick people," said Hernandez, adding that he had never seen "so many" migrants travelling together in such conditions.

An AFP video showed several hundred migrants, looking sullen and tired, crowded in a courtyard of the National Migration Institute as police in riot gear stood guard nearby.

After their names were read out by officials, migrants boarded a bus to be transported for further processing.

Child protections services have also been notified regarding families with children or minors travelling alone, according to Hernandez.

As the corridor between Central America and the United States, Mexico has seen vast numbers of migrants flowing through its territory.

Two caravans of several hundred migrants are currently making their way through southern Mexico, aiming to acquire documents that allow them to transit through the country.

The flow of undocumented migrants has surged with the inauguration of US President Joe Biden, who has taken a more humane approach to the border crisis than his predecessor Donald Trump.

The United States has recorded 1.7 million people entering illegally from Mexico between October 2020 and September 2021, an all-time high for the period.