Alarming Rise in Rohingya Lost at Sea in 2022: UN 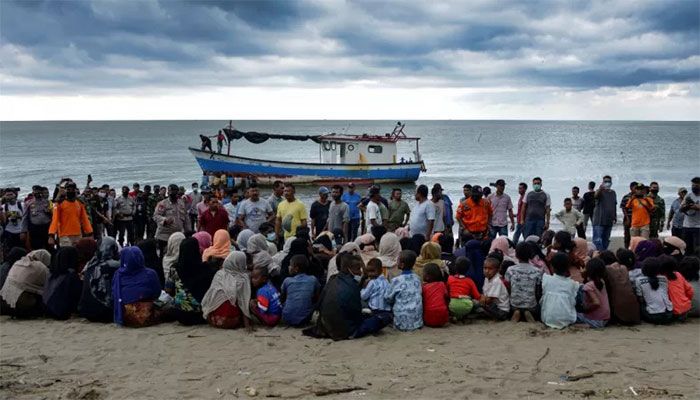 Rohingya from Myanmar sit on the shorelines of Lancok village, in Indonesia's North Aceh Regency, after some 100 including 30 children were rescued from a wooden boat off the coast of Indonesian island of Sumatra. || AFP Photo

The UN decried Tuesday the "alarming" rise in the number of Rohingya refugees lost at sea fleeing their Myanmar homeland or Bangladesh last year, warning more would die without concerted action, reports AFP.

More than 3,500 Rohingya attempted sea crossings in 2022, representing a huge increase on the year before, when some 700 people made similar journeys, said UNHCR, the United Nations' refugee agency.

"UNHCR has recorded an alarming rise in the death toll. At least 348 individuals died or went missing at sea in 2022, making it one of the deadliest years since 2014," spokeswoman Shabia Mantoo told reporters in Geneva

She said that 3,040 Rohingya who attempted to flee by sea disembarked last year, primarily in Myanmar, Malaysia, Indonesia and Bangladesh. Nearly 45 per cent of those who did so were women and children.

"Most boats departed from Myanmar and Bangladesh, highlighting the growing sense of desperation amongst Rohingya in those two countries," Mantoo said.

"Those who have disembarked report that they undertook these dangerous sea journeys in an effort to find protection, security, family reunification, and livelihoods in other countries," she said.

"Among them are victims of trafficking, unaccompanied and separated children, and survivors of sexual- and gender-based violence."

A military crackdown in Myanmar in 2017 sent hundreds of thousands of Muslim-minority Rohingya fleeing into neighbouring Bangladesh with harrowing stories of murder, rape and arson.

Mantoo said calls by UNHCR to maritime authorities to rescue and disembark people in distress have gone unheeded, with many boats adrift for weeks.

"The current crisis in the Bay of Bengal and the Andaman Sea is a crisis of solidarity," she said.

UNHCR is calling for a full regional response, addressing human trafficking, search and rescue efforts and support in countries where Rohingya refugees disembark.

It also wants to see efforts to address the root causes of why Rohingya are fleeing Myanmar.

Mantoo said that without such a response, "more people will die on the high seas" as people undertake dangerous journeys in search of safety.