What if Palestine had its own currency?

Palestinians have been without their own currency for more than six decades. Now one designer wants to change that 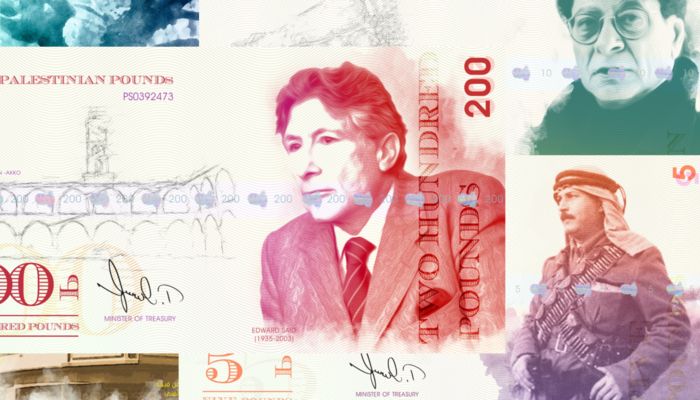 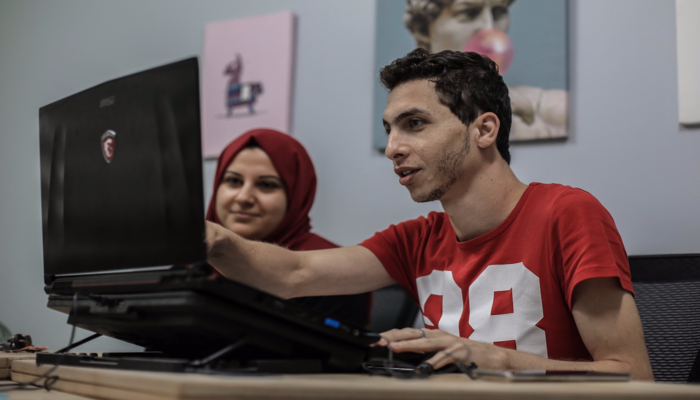 Designer Jehad Naji, 29, pictured here with his wife Haneen Abu Samhadana, had the idea of designing a currency for Palestine after a British journalist asked him about which currency to use during a visit to Gaza. Naji had to explain to him that there was none and that Palestinians have to use the Israeli shekel (Sanad Abu Latifa) 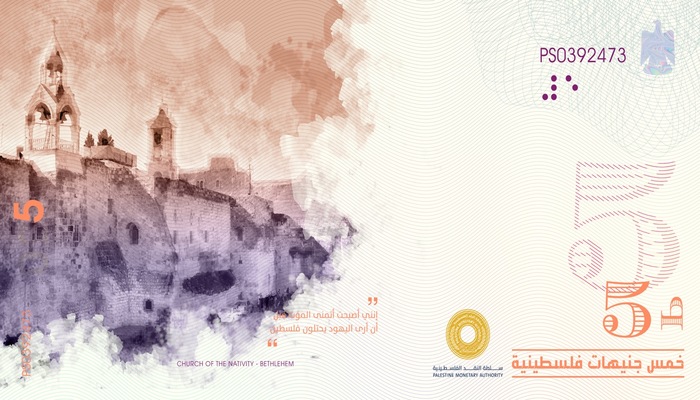 “People living outside Palestine have no clue that being occupied means that you do not get to decide even on your own currency," Naji says. Here, his design for the front of the five-pound note shows the Church of the Nativity in Bethlehem (all note designs copyright Jehad Naji). 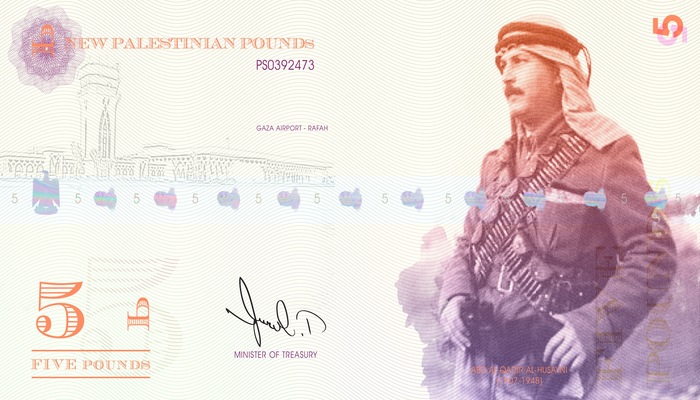 Naji says the hardest part was choosing which Palestinian figures and landmarks to use. The back of the five-pound note features Abdul Qader al-Hussaini, the commander and key founder of the Army of the Holy Jihad (Jaysh al-Jihad al-Muqaddas) in the 1947-48 war. “Although at first I decided to reflect only the Palestinian culture in the currency, [but] I could not ignore Abdul Qader al-Hussaini,” he says. “No one can deny the role of the Islamic trend in Palestine." 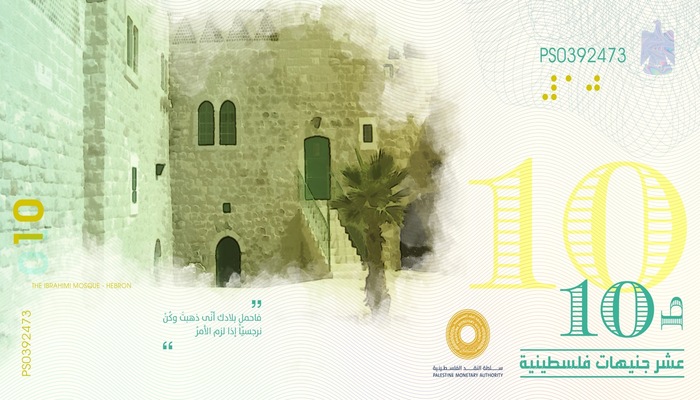 Palestinians used the Palestinian pound during the British Mandate of Palestine (1927-1948), after which no further notes were issued. In Gaza, the Egyptian pound was used from 1951, while in the West Bank the Jordanian dinar was used from 1952. The shekel has been used in both territories since the 1967 occupation. The front of the ten-pound note, above, shows the Ibrahimi Mosque in Hebron. 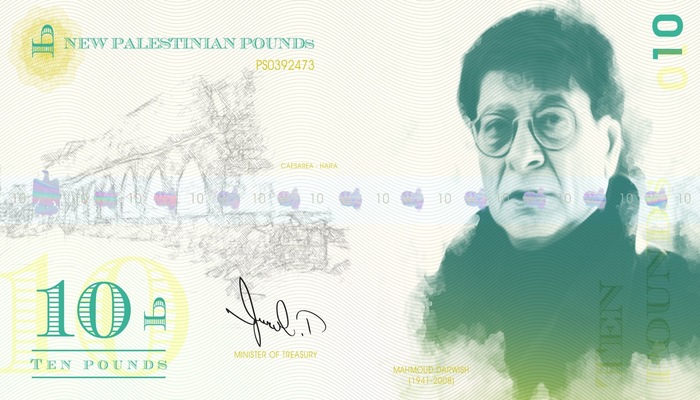 Naji’s wife, Haneen Abu Samhadana, supported him during the 13-month project, advising and helping choose colours. “The greatest shock was after we posted the photos, when we discovered that people abroad did not even know we use Israeli shekels and not our own currency," she says. The Palestinian poet Mahmoud Darwish is shown on the reverse of the ten-pound note, next to the Roman site of Caesarea in Haifa. 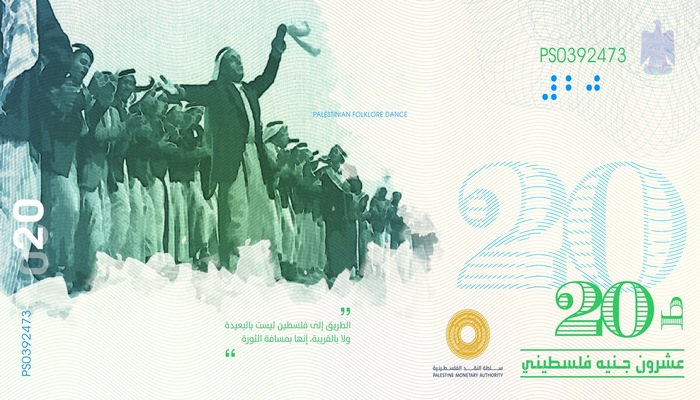 The front of the 20-pound note depicts a performance of the dabke, a Palestinian folk dance. “My [overall] choices were based on my belief that these symbolic figures contributed to the Palestinian peaceful struggle," says Naji, "although both Yasser Arafat and Abdul Qader al-Hussaini can be controversial figures in terms of the peaceful resistance." 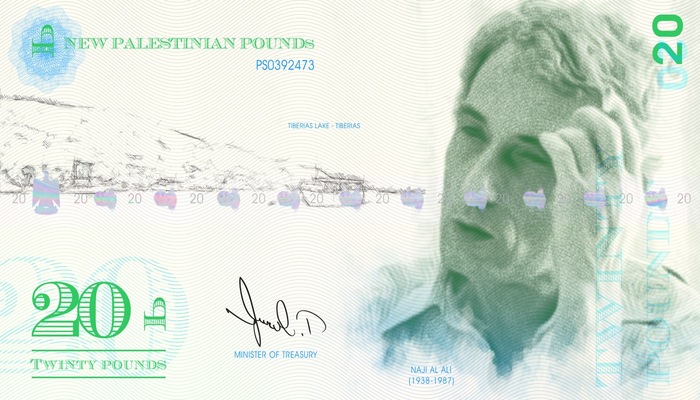 Naji says that when he had the designs made, the printer at the stationary shop was mesmerised. “I asked him which he preferred, the Israeli shekels or these Palestinian pounds. He said the Palestinian, without hesitation. People still have hope, they feel proud about anything that reminds them of their history." The back of the 20-pound note depicts the cartoonist Naji al-Ali, next to Lake Tiberias. 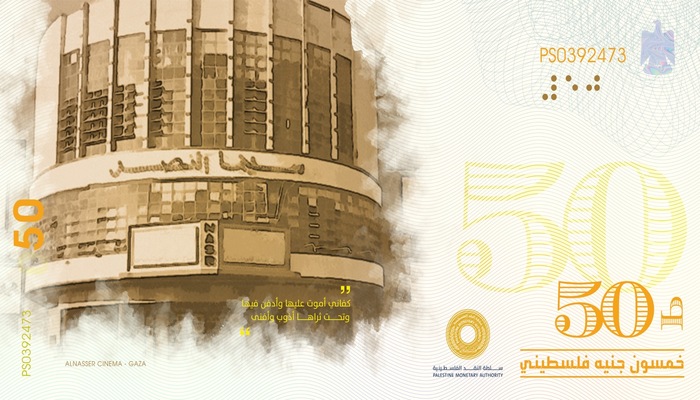 The front of the 50-pound note shows the famed al-Nasser Cinema in Gaza. Najib hopes his work will restart the debate on Palestinian currency. “I spent at least eight months just researching the history of currencies and that of Palestine... why we, Palestinians, do not have our own currency and why we cannot just reuse the Palestinian pound." 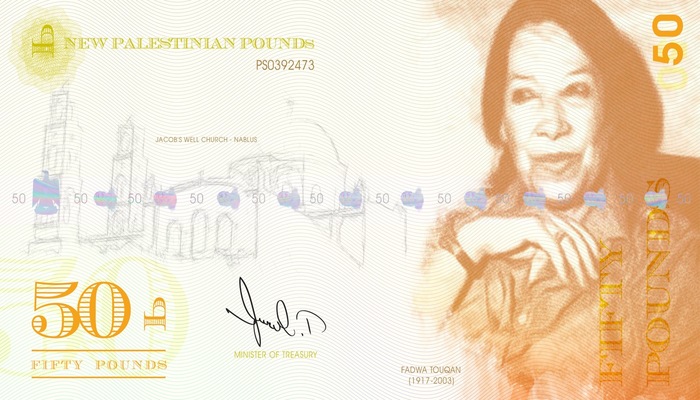 The back of the 50-pound note shows the Palestinian poet and feminist campaigner Fadwa Touqan, who died in 2003. To her left is the Church of Jacob's Well in Nablus. 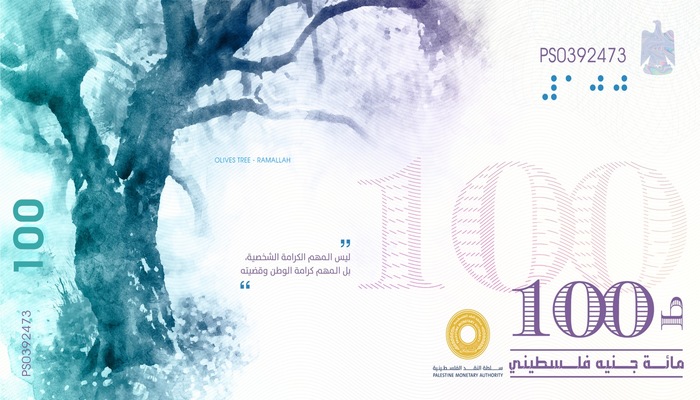 The front of the 100-pound note shows the broad trunk of a Roman olive tree, which has stood for more than 2,000 years in Ramallah. The Arabic quote, by Yasser Arafat, reads: "Personal dignity is not what's important, rather the dignity of the homeland and its cause." 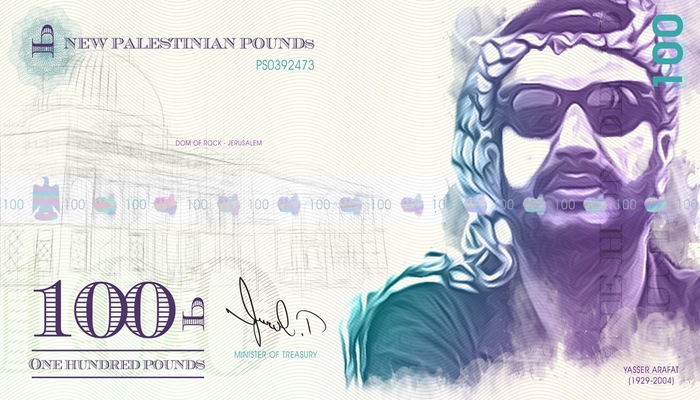 The back of the 100-pound note shows Yasser Arafat. Besides him is the Dome of the Rock in the Old City, Jerusalem. Naji says the choice of the PLO leader has drawn criticism as Arafat signed the Oslo and Paris Agreements, which made it much harder for Palestine to have its own currency. “But," Naji says, "I cannot talk about Palestine and ignore the history of Arafat. That is impossible." 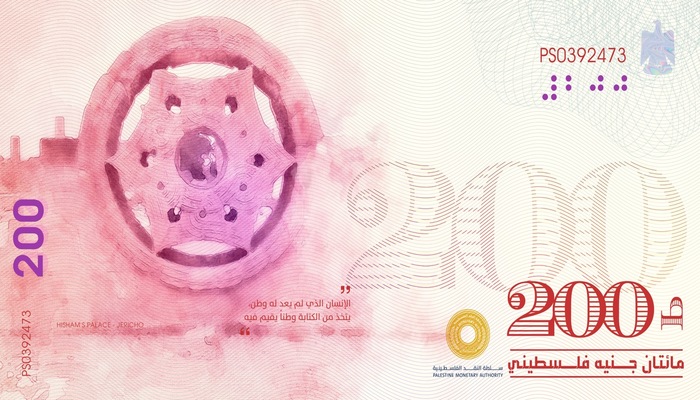 Naji's design for the front of the 200-pound note depicts Hisham's Palace in Jericho. While Naji and others want Palestine to have its own currency, the Palestinian Monetary Authority (PMA) told MEE that it would need to be in line with agreements that stipulate the approval of Israel, the World Bank and the IMF. 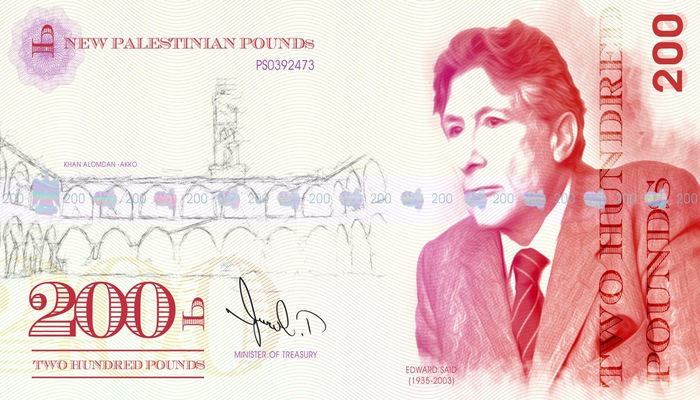 Saif al-Deen Oda of the PMA also told MEE that it would not be possible due to the state of the Palestinian economy. “Israel would not accept the idea of allowing Palestinians to print their own currency," he said, "this is part of the occupation." Pictured: Academic Edward Said on the reverse of the 200-pound note, next to Khan al-Umdan in Akko (also known as Acre). 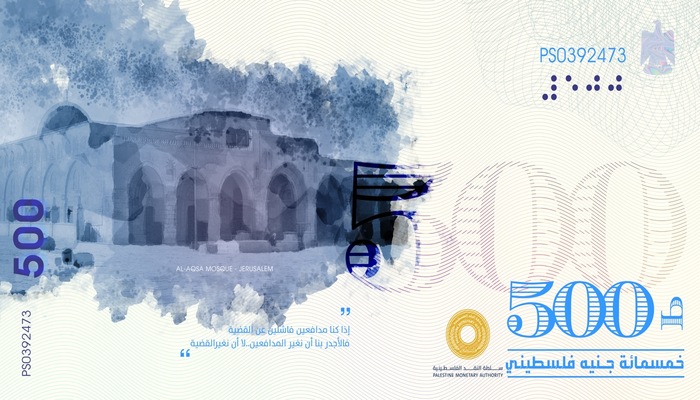 Oda also pointed out that dependence on the shekel meant that all international aid for Palestine had to be converted into the Israeli currency, bolstering Israel’s foreign exchange reserves. Pictured: The front of Naji's design for a 500-pound note shows al-Aqsa Mosque in Jerusalem.

The back of the 500-pound note shows writer and political activist Ghassan Kanafani next to Barquq Castle in Khan Younis. Naji now plans to exhibit his design. “I hope my project reaches national and international officials because having the people decide for themselves should not be something limited to the past.” 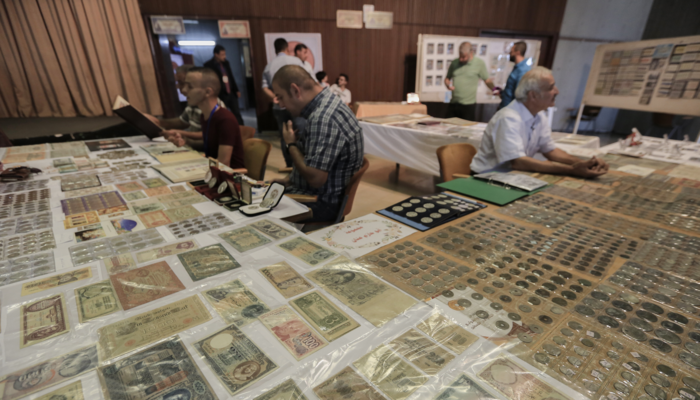 Naji is not the only Palestinian fervent about currency. At an exhibition at the Rashad al-Shawwa Cultural Centre in Gaza, organised by the Coins and Stamps Collectors League, Ahmed Jarada, 38, spoke of his love for the pre-Nakba notes and coins. “This is our history, and I do not regret spending money on it" (Sanad Abu Latifa). 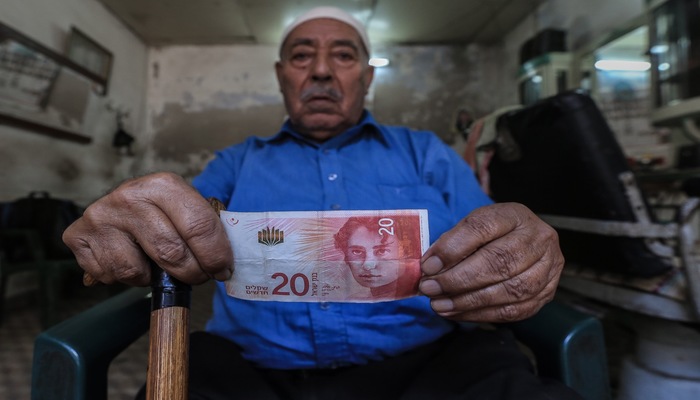