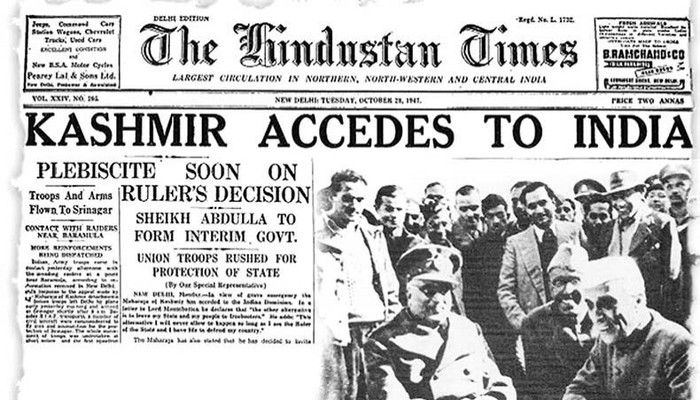 THE issue of the silence of the Muslims of India on the travails of Kashmiri Muslims has been simmering ever since the Instrument of Accession of October 26, 1947. The Modi government’s assault on the very existence of Kashmir’s autonomy on Aug 5 has brought the issue to the fore. Silence in the crime is not only inexplicable but condemnable.

Reputed Kashmiri journalist Yusuf Jameel reported: ‘Kashmiri Muslims acknowledge the constraints on Indian Muslim leaders and that in the current political environs the latter have to watch their statements and actions, particularly on Kashmir. They can’t afford to go against the tide. They also realise that Indian Muslims are as responsible Indians as any other and, therefore, should not be expected to deviate from the national position on Kashmir.

‘Notwithstanding, reports from various parts suggest that a majority of common Indian Muslims feel concerned and have sought to reach out. Kashmiri traders and students corroborate the “change of heart” among ordinary Indian Muslims.’

He noticed the empathy of Indian Muslims but is concerned about the silence and worse of some of them. The time has come to trace this attitude to its roots. They go back to Jan 6, 1948, when India’s deputy prime minister Vallabhbhai Patel addressed a meeting shortly after his colleague Maulana Abul Kalam Azad had addressed the Indian Union Muslim Conference on December 28, 1947, both in Lucknow. Patel said: ‘I want to ask the Indian Muslims only one question. In the recent All-India Muslim Conference, why did you not open your mouth on the Kashmir issue? Why did you not condemn the action of Pakistan? These things create doubt in the minds of the people.’

Nehru did not emulate Patel’s McCarthyite test of loyalty. But as events picked up, he became increasingly intolerant of dissent on his foreign policies, particularly on Kashmir. He had his friend Mridula Sarabhai thrown out of the Constitution Club because she disagreed with his Kashmir policy. She supported Sheikh Abdullah till her last breath.

If in 1951 a deputation of Indian Muslims, led by Nehru’s friend Zakir Hussain, called on the UN mediator on Kashmir Frank P Graham, it was obviously at Nehru’s instance. A convention of Indian Muslim legislators held in Lucknow in March 1958 claimed that the people of Kashmir had endorsed the decision to accede through their elected representatives, that the decision was final and that ‘any moves made to weaken or damage this position [are] ill-advised and harmful.’

The Nawab of Chhatari referred to the special stakes of Kashmir’s Muslim majority to Indian Muslims: ‘They feel that the progress and prosperity of Kashmir is a visible symbol of the secular democracy….’

This echoed the new line Nehru propounded — Kashmir’s continuance in the Indian union was necessary to protect India’s secularism and Indian Muslims. This hostage theory was propagated belatedly. Why then was plebiscite espoused by Nehru from 1947 to 1953? The publications division of the external affairs ministry published a brochure on Indian Muslims on Kashmir. It was distributed all over the place like a wedding invitation card.

This disgraceful ploy worked. Muslims withdrew into a shell whenever the word Kashmir was uttered. Veteran socialist politician Ashok Mehta chided this writer for his support to Sheikh Abdullah’s stand on Kashmir: ‘I am surprised that an Indian Muslim (like you) should hold such a view.’

Soon this intolerance was extended to espousal of redress for the mounting grievances of Muslims; or education, employment, even basic physical safety, and police outrages. Muslims of riot-torn Sambalpur met, not to demand protection, but to send a telegram to the UN Security Council to claim to its members that ‘Kashmir’s accession to India is irrevocable.’ Muslims who met to voice their grievances were communalists; if they met to support India’s case on Kashmir, they were nationalists.

It saw the rise and financial prosperity of Uncle Toms among Muslims. In 2019, this craven policy must end.

First, Muslims of India must provide help and succour to the Kashmiris; especially the students who face hardships. Next, they must voice their views freely. In 1947, both Jinnah and Nehru said that the future of minorities depended on the state of relations between Pakistan and India. Muslims should urge a settlement of the Kashmir problem and thus improvement in Pakistan-India relations. Finally, they must voice their support, in company with hosts of civil libertarians, against human rights violations in Kashmir.

AG Noorani is an author and a lawyer based in Mumbai