A change of heart about war against Iran? 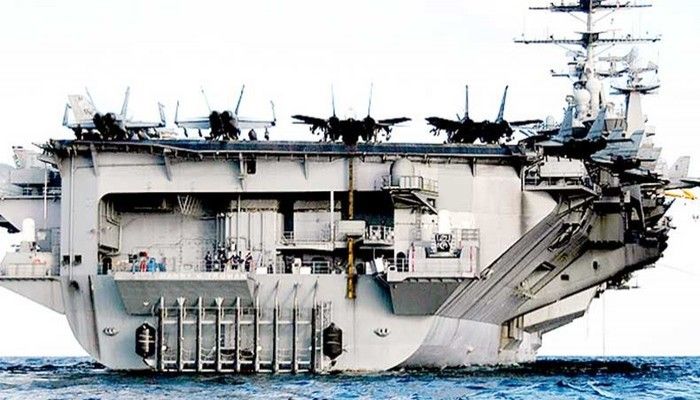 AN UNFRIENDLY relationship between Tehran and Moscow in the past years was to the benefit of the United States because Iran was the only deterrent that prevented Russia from getting a foothold in the Middle East, which would have threatened US interests in the region. However, recently the Russian Federation and the Islamic Republic of Iran have fostered closer ties in Syria. And as a result, not only did Russia increase its presence in the region but also, together with Iran, began pushing the USA out of there. Hence, Washington made a decision to crush Iran once and for all, as the latter had become a direct threat to the security of Israel (a US stronghold in the Middle East).

Several years ago, the United States seriously considered attacking Iran even without any attempts by American politicians to put together some sort of a coalition to do so. While planning the onslaught without any ‘outside’ help, the United States relied on the superiority of its military and technological spheres, especially on that of its air force.

However, after the drone attack on Saudi Aramco facilities in September, the confrontation between the United States and Iran entered another stage. Although Yemeni Houthi rebels claimed responsibility for the strike and US secretary of state Mike Pompeo blamed Tehran for the attack, US president Donald Trump chose a more cautious stance. He stated that, aside from armed conflict, there were a number of other ways of exerting pressure on Iran. ‘There are many options. And there’s the ultimate option, and there are options that are a lot less than that,’ the US president told journalists in California in September. ‘I’m saying “the ultimate option”, meaning go in — war. No, I’m not talking about — I’m not talking about that ultimate option. No,’ he added.

The Pentagon also expressed its opposition to the latest military adventure for obvious reasons. After all, it will not be the politicians from the banks of the Potomac River who will then have to extricate the United States from a bloody mess that well known forces in the United States, Israel and, last but not least, Saudi Arabia so wish to create. It is very clear to its leadership that in recent years Iran has managed to re-equip its forces with quality armaments, thereby significantly increasing its military capabilities. The nation has been particularly successful at designing its own surface-to-air missile systems, and has also become an undisputed leader in the unmanned aerial vehicle sector. Russia has helped Iran improve its defence capabilities by, among other means, supplying it with S-300 PMU2 SAMs. As a result, Iran’s ability to defend its airspace has increased significantly. And in the opinion of a number of foreign military experts, any aggressors that attempt to strike against Iran may incur serious losses. And as many of us know, any American casualties are completely unacceptable for the US army, and particularly for its air force. According to the World Military Strength Rankings, Iran is number 14, that is, above Pakistan, Israel, North Korea, Australia and Canada, and, in the last two years, it has moved up seven places. In addition, the Islamic Republic of Iran Navy is in fourth place in the world based on its might. It has 398 combatant ships, including 34 submarines, thus its capabilities are only somewhat less than those of the United States Navy.

This is why Donald Trump’s current stance is radically different from that in 2017, when he (less than three months into his presidency) ordered air strikes against Syria only two days after the chemical attacks, allegedly ordered by Bashar Assad, and deliberately staged events organised by paid provocateurs from the White Helmets.

The fact that Donald Trump has changed his position on Iran may also stem from the decision taken by the president (who is usually impulsive) to exercise more caution on account of the start of the presidential election campaign. While promoting his ‘America First’ policy (which had already helped him win in 2016), Donald Trump wrote in his Twitter feed that the Unites States ought to end its ‘stupid endless wars’ in Syria and send the troops back home. He has also expressed similar views about other conflicts that the Unites States had initiated. The president has stressed that the war in Iraq was a waste of money; that it was high time the US forces were withdrawn from Afghanistan, and that other nations needed to compensate Washington for the expenditures associated with stationing its troops abroad, from South Korea to Germany.

In the last few days, the US president has had a similar anti-war epiphany with regards to Iran, despite continued attempts to ramp up tensions between the United States and Iran and even calls for armed retaliation by Israel, Saudi Arabia and Donald Trump’s closest circle in Washington. Undoubtedly, the latter includes, first and foremost, US secretary of state Mike Pompeo, vice president Mike Pence, the senior advisor to the US president and Trump’s son-in-law, Jared Kushner, as well as a number of leaders in the Middle Eastern region (including Benjamin Netanyahu, the crown prince of Saudi Arabia Mohammad Bin Salman Al Saud, and Mohammed bin Zayed Al Nahyan, the crown prince of the Emirate of Abu Dhabi), who are all desperately trying to get Donald Trump to fall into the Iranian trap.

And up until now, such calls had been heeded by the American ruling elite with its aggressive and expansionist policy based not so much on the instinct of self-preservation and the need to overcome the threat posed by Iran, but more on the desire to completely dominate all of Eurasia (where 75 per cent of the global population reside and most of world’s riches are located). And as a result of US military adventures there, formerly powerful armed forces of Iraq, Libya and a number of other nations in the region have been destroyed, with only one substantial army remaining (ie in Iran) that is capable of putting up some resistance to the United States.

This is why, in the current climate, Donald Trump has indicated that he does not support an armed conflict against Iran with its unpredictable consequences. Iran’s president Hassan Rouhani even stated that the US president had proposed lifting all the sanctions against Iran during his meetings with European leaders on the sidelines of the United Nations General Assembly session in New York. And during the October hearing of the United States Senate Committee on Foreign Relations, US special representative for Iran Brian Hook said that the United States was prepared to hold negotiations with Iran and meet with representatives of its leadership without any pre-conditions.

Following Washington’s lead, Saudi Arabia began to pivot towards Iran. During an interview with the Iranian Labour News Agency at the beginning of October, Iranian government spokesman Ali Rabiei confirmed that Iran’s leadership had received a message from Riyadh, and tactfully added that Tehran would welcome Saudi Arabia’s overtures towards peace. And at the end of September, Saudi crown prince Mohammad Bin Salman Al Saud surprised Americans by talking about Iran and its allies without any signs of aggression and even, at times, in a friendly manner during an interview with the CBS network.

And while Saudi Arabia is searching for intermediaries who could pass on a request to start peace negotiations to Iran, the Arab Emirates (a neighbour, a friend and an ally to the Kingdom) is re-establishing communication channels with the Mullah’s regime behind the scenes. Egyptian media outlet Noon Post has reported about the secret visits by UAE Sheikhs to Tehran and murky deals concluded there.

So Iran really is not Afghanistan, Iraq or Libya. Hence fittingly, prime minister of Pakistan, taking Iran’s military might into account, recently expressed his doubts about whether the West fully comprehended the consequences of the conflict with Iran or not, and issued a stark warning that there would not be a repeat of the ‘Iraqi scenario’ there. It is, therefore, highly risky to start a war against the Islamic Republic of Iran even for the United States.

Writer: Vladimir Platov is an expert on the Middle East.