Hollow promises of a better life 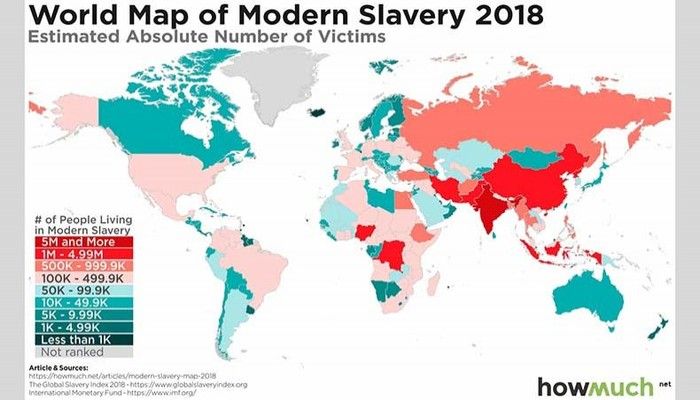 DESPITE the fact that slavery has long been abolished it continues to blight our world, destroying the lives of tens of millions of people. The Global Slavery Index 2018 estimates there to be 40.3 million slaves in the world; however, given the difficulty of collecting data, the areas that are not included — organ trafficking, child soldiers, or child marriage — and the fact that, as GSI says, there are ‘substantial gaps’ from the Arabs States, where 17.5 million migrants workers live, the actual number will no doubt be a great deal higher.

Of the 40.3 million total, 24.9 million people ‘were in forced labour and 15.4 people were living in a forced marriage.’ Men, women and little children living inhuman lives, imprisoned, abused, crushed. Women and girls make up 71 per cent of the total; a staggering one in four (10 million plus) are children.

Treated and regarded by those that exploit them not as human beings, but as chattel — property — victims of slavery are traded for money and services throughout the world. The Asia-Pacific region has the largest number of enslaved people — 30.4 million, and, according to Anti-Slavery International 9.1 million people are in slavery in Africa. Repressive regimes, such as North Korea, Burundi, Eritrea, have the highest prevalence of slaves. In North Korea it is said to be as high as one in 10. But no country, no matter how wealthy, liberal and well policed, is immune to this abhorrent practice, it is happening everywhere.

As part of the 2015 UN Sustainable Development Goals member states committed to eradicating modern slavery by 2030. But, unsurprisingly perhaps, progress towards this has been slow and, as GSI puts it, ‘disgracefully marginal’. Human trafficking is now the second most lucrative criminal activity after drugs and it’s increasing; a large percentage is sex trafficking (of women and girls) and over half of people are trafficked within their own country.

The most common forms of slavery are: domestic servitude — widespread in the Middle East and North African countries but also prevalent in western nations; sexual exploitation/forced marriage, and bonded labour (or debt bondage/debt slavery) — when a person works in exchange for a loan or to pay off debt inherited from a family member — particularly common in South-east Asia and the Gulf States.

In India bonded slave labour is widespread, with people, specifically women, from the Dalit (previously labelled the ‘Untouchables’) caste and tribal groups being most affected. Although the caste system is illegal, social classification based on the family of birth dominates, particularly in rural areas. In a detailed report on slavery the Council on Foreign Relations state that affected Indian ‘families [can] remain enslaved for generations, working in dangerous conditions without the means to pay for their freedom… the cycle often begins with a loan request made to a landlord or business owner for expenses incurred burying a family member, treating an illness, procuring employment, or staging a wedding.’ Once the loan is given threats are made, exploitation begins, often the work done far exceeds the value of the debt. Rice mills, textile factories, farms, brick kilns are some of the prisons of bonded labour.

A LARGE percentage of victims work in the supply chains of multinational corporations in the form of forced or bonded labour, including child labour. They are paid little or nothing, work extended hours often in unsafe conditions and live in appalling accommodation. The more complex the supply chain the greater the risk of slavery, the more difficult to trace. Food and tobacco companies, clothing/textile businesses, mining, construction (migrant workers are particularly at risk of exploitation in this area), seafood and electronics, all are vulnerable to modern day slavery.

While the act of enslavement may occur in the depths of the supply chain, products are imported to developed countries, making these countries and businesses if not wholly complicit, certainly partly responsible; GSI estimate that ‘G20 countries are collectively importing US$354 billion worth of at-risk products annually.’ Hidden in large part from unsuspecting or uninterested consumers; slave labour is cheap, reducing costs, maximizing profits.

Consistent with most, if not all of our social and environmental ills the global socio-economic system of the age, and the attitudes, values and ways of being that it encourages play a significant role in feeding the ground for exploration and abuse. Under the poisonous shadow of neo-liberalism, everything and everyone is regarded as a potential commodity, something, or someone, to be profited from in some way; it is an inherently unjust system that corrupts action and fuels social divisions.

Competition together with notions of reward and punishment form the foundation of its doctrine. Desire, and with it fear, are relentlessly agitated, contentment and harmony brushed aside in the relentless pursuit of profit.

Within the ideology of greed and selfishness, negative tendencies are emphasised; instead of encouraging expressions of unity, human beings are set in opposition to one another, forced to compete to survive. The economically weak and socially vulnerable are manipulated, exploited, enslaved, and when, through ill health, physical deformation, old age, or exhaustion, they can no longer work ceaselessly for a pittance or nothing at all, cast aside. Broken in mind, body and spirit, a life for many is lost.

‘I was looking for a job’

HUMAN traffickers and criminal gangs engage in slavery for one reason: it’s the same reason that drives the business world, large and small, and preoccupies people around the world — to make money. As such, it is, as Kevin Bales, professor of contemporary slavery at the University of Nottingham, says, ‘an economic crime’. They prey on the poor, the naive and vulnerable, those without work or those working but living in terrible hardship.

While it is estimated that one billion people in the world live in poverty, a great many more exist in economic hardship and insecurity. People living in destitution, desperate to support themselves and their families, are a soft target for criminal brokers with hollow promises of a better life: A restaurant job in the city for the daughter of tea pickers in Assam, India — and the teenager is swiftly trafficked into prostitution; work as a housekeeper in Dubai for a young Ethiopian girl, who ends up in debt bondage and domestic slavery, often sexually abused. Construction work for a Nepalese man in Qatar, trapped into debt by unscrupulous ‘recruitment agents’ and exploited by greedy employers.

Another major factor allowing slavery to flourish is neglect or the total absence of the rule of law, as in countries that have been torn apart by armed conflict, or where corrupt police and government officials exist. In such places — Democratic Republic of Congo, Libya, Iraq, Syria and Yemen for example, human traffickers operate with impunity.

Over the last 70 years there has been a global population explosion contributing to a range of issues including slavery. In 1950 there were 2.5 billion people on Earth, now it’s 7.5 billion and there are also an unprecedented number of displaced people in the world — 70.8 million according to UNHCR. Without a home and stability, displaced people, including migrants and refugees, are extremely vulnerable. Uprooted and desperate, they can be easily manipulated by criminals seeking to exploit their dire circumstances. CFR relate that migrants and refugees, as well as ethnic and religious minorities, particularly women and children, are at heightened risk of enslavement.

The existence of modern day slavery is a stain on our collective humanity; this appalling practice must end, and, as GSI make clear, ‘governments around the world need to redouble efforts to identify victims, arrest perpetrators, and address the drivers.’ The causes are complex, interrelated and connected to the current inadequate modes of living. If we lived in a world where social justice was central to economic policymaking, where the underlying causes of conflict were addressed and where values rooted in brotherhood and compassion prevailed, slavery would be banished. In the absence of such common sense and desperately needed radical changes, the steps required and advocated by those working in the field are all we have, and need to be acted upon — with urgency.

Like many of the issues facing humanity, modern day slavery demands a coordinated consistent approach, cooperation and commitment, not just among governments, but between nongovernmental organisations, and multinational corporations. Tougher law enforcement is needed and greater transparency within global supply chains. Businesses should be forced to investigate their own suppliers, while responsible consumption should also play a part in cleaning up supply chains and helping to drive slavery from our world for good.

Graham Peebles is an independent writer and charity worker. He set up The Create Trust in 2005 and has run education projects in India, Sri Lanka, Palestine, and Ethiopia.