My wish for Michelle Obama 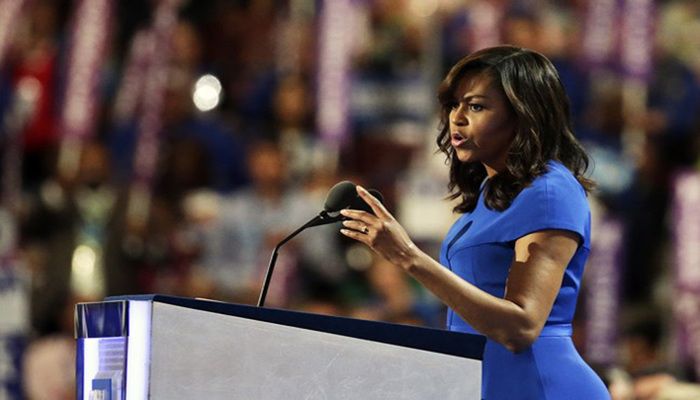 ﻿﻿﻿Michelle Obama is an extraordinary woman by any measure.

She is an attorney with degrees from Princeton and Harvard universities. She is the former first lady of the United States, and the first African American one. She just came off a gangbusters book tour for her memoir, “Becoming,” which was Amazon’s longest No. 1 title since “Fifty Shades of Grey.” And, according to polls, she is the most admired woman in the world.

She has conducted her life with the utmost honour, dignity and grace. Every day I miss her and her husband’s presence in the White House. Their contrast with the Trumps is so stark that it’s painful. America downgraded erudition to indecency.

Obama owes no one anything. She has nothing to prove. It is already proven.

This is why I was saddened to hear her say at the Obama Foundation Summit in Chicago that she “can’t make people not afraid of black people.” She continued: “I can’t explain what’s happening in your head, but maybe if I show up every day as a human, a good human … maybe, just maybe, that work will pick away at the scabs of your discrimination.”

Why should this brilliant black woman spend even a second of her time considering the mindset of a racist? She shouldn’t. No black person should. No person who suffers the sting of racism should.

Obama’s intentions are honourable, but the approach is problematic. Anti-black racism and white supremacy are not predicated on black people’s behaviour. From the time Europeans started stealing people from Africa, they used pseudoscience and supposedly observed behavioural traits to justice their brutality, subjugation and exploitation.

Black people, in their eyes, were conversely brutish and savage or shiftless and lazy. They were less intellectually and culturally advanced. They lack the morality and character to exist on the same plain as white people. White people weren’t putting black people in an inferior position, God and nature had done that.

This behavioural rationale was used to justify and maintain slavery; to argue and fight against reconstruction; to justify black codes and Jim Crow; to sanction racially disparate drug policies and penalties, including mass incarceration; and now to excuse the killings of black people by the police.

Abraham Lincoln, during the Lincoln-Douglas debates in 1858, took it even further, saying. “There is a physical difference between the white and black races which I believe will forever forbid the two races living together on terms of social and political equality.”

Black people were so submerged in this behavioural orthodoxy, that they absorbed it. They, too, started to believe that if they altered their behaviour, if they better assimilated, if they rose to white people’s ideals, they would mitigate white racism.

Booker T. Washington, quite famously, subscribed to this thinking. Washington was a brilliant man who dedicated his life for the betterment and uplifting of black people. But, he made the miscalculation of thinking that he could so demonstrate his worthiness to white people that they would self-correct their racism and reward black people with social equality and justice.

It doesn’t work that way. Racism is a pathology bound up by power.

To the white racist, racism is heritage. In their worldview, white men created the modern world and advanced culture. To them, whiteness is beauty and power, it is the pinnacle of human evolution.

As such, there is nothing that a black person could do to graduate out of subordination and into equality. Our blackness itself is the mark, and it cannot be erased.

People worried during the Great Migration that blacks behaving badly would convert Northern whites into racists like their Southern brethren. In 1916, Kelly Miller, the dean of the College of Arts and Sciences at Howard University, wrote a letter to the editors of The New York Times worrying that the migrating black would “naturally enough, at first, mistake liberty for license unless he is carefully safeguarded and encouraged in the right direction.”

“Should the influx of Negro laborers to the North, without proper restriction and control, be allowed to prejudice public opinion and thus reproduce Southern proscription in the Northern states, the last state of the race would be worse than the first.”

But, there were already white racists in the North. Their racism had nothing to do with black people’s behaviour.

No one should endeavour to live their life as an exemplar for the white gaze. For the oppressed to feel any obligation to fix the flaw in the oppressor is simply another form of oppression.

Centring on the white racism perception of you is futile, distracting and corrosive.

My wish for Michelle Obama is simple: that she never again allow herself to entertain the thought of how she is being perceived by racists and whether or not that is changing any of their minds.

Why should cave men be allowed to occupy space in the mind of a super woman?