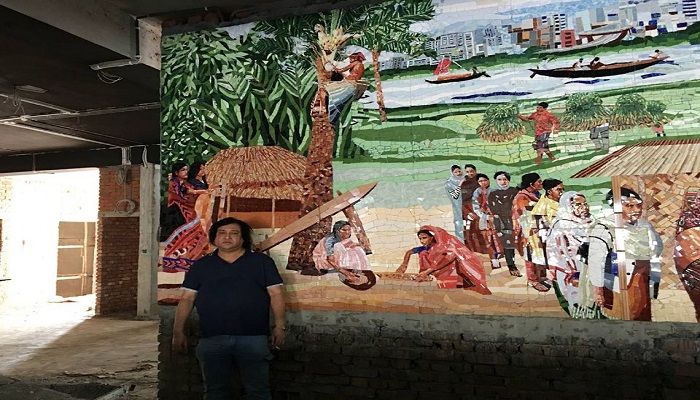 Mrinal Haque, a thoughtful mentor, a father, a son, a family friend,  and a prominent sculptor of all time.

I never knew I would have to come across this day where I have to take a walk down my memory lane and pen down this man's achievements on paper.

From his ride to Cadet College in Rajshahi to getting a Bachelor of Arts degree from the Fine Arts Institute of Dhaka University, he was always inclined towards the world of art and culture. He had this amusing ability to work with abandoned leftovers like keys and chains; it was this unique aptness of his that made him stand out as an individual amidst the crowd. It did not take him long to get a big break after coming back from the US in 2002 on the soil of Bangladesh. He worked primarily with clay, marble, cement, wood, bronze, terracotta, etc and he was successful in creating over 36,000 square feet of mosaic paintings.

His all-time famous sculptures as we all know include the ''Golden Jubilee Tower'' marking Rajshahi's Golden Jubilee, ''Ratnadwip'' in front of our Honorable Prime Minister's Office, ''Balaka'' at Motijheel in the capital, ''Rajsik'' in front of Hotel Intercontinental, ''Atalankite Basati'' that is in front of the Navy Headquarter, ''Protyasha''. The sculpture, built on the theme of Liberation War and world peace, has been set up on the triangular island adjacent to Bangabazar Government Employees Hospital and so many more. One significant piece of work is the ''Janani O Gorbito Bornomala'' built beautifully at Poribagh, near Bangla Motor that depicts a mother carrying her martyred son, who was shot and killed during the language movement, in her laps. The statue is the perfect delineation of the glory and sacrifice upon which we gained our victory. Moreover, the first time I came across the ''Ishpater Kanna'' (literally cry of steel) at Dhanmondi 27, it took my breath away as I wondered that how someone took care of the small details while working with rickshaw chains and how mesmerising it looks from every angle you look at it. It was just not Bangladesh where everyone took him as a huge inspiration, he was renowned in the United States of America where his sculptures, murals and mosaic paintings are seen in noticeable locations such as the gardens and on the streets of Jackson Heights in Queens, New York. Alongside this, the New York Transit Authority had chosen him to create mosaics for several years. His work has been exhibited across the globe in thirty different countries. He was twice featured in Osaka Bi-annual Art and Sculpture Exhibition in Japan and then again in France and India. In addition, he also held exhibitions in China, five-time solo exhibitions in Bangladesh, Singapore and Malaysia, and also a seven-time feature of the Asian Bi-annual Art Exhibition. He has participated in various other exhibitions such as the National Art Exhibition for a total of fourteen times, and seven times in the National Sculpture Exhibition of Bangladesh.

They say, with all the good things happening, those good things are put to test also- with the immense love and popularity, Mrinal Haque faced some serious controversies which invited a lot of hate comments, certain judgments from the mass. For instance, in 2016, he created ''Lady Justice'' that was situated in the Supreme Court premises. Afterward, he was flooded with religious bashing from several Islamic organisations including Hefazat-e-Islam who demanded to take the statue down. Even after the continuous protests from social, cultural and political student organisations, the statue was removed from the main building and put behind the Annex Building in 2017. Not only the Lady Justice, the government took down his ''Lalon'' sculpture in front of the Dhaka airport after the so-called fundamentalists demanded that it should be taken down in 2018. It was the same year, as news came out, Ulama Anjumane Al Bayenat activists vandalised the 'Balaka' sculpture in Motijheel.

I have had the honor to know him on a very personal level where I could show him some of my paintings, have him provide me with constructive criticisms and help me with major improvements and invite him to both my art exhibitions held in 2018 (Poverty in Bangladesh) and 2019 (Depression) at Drik Gallery. The first time I visited his office at the Mrinal Haque Creative Arts Gallery at Gulshan, he turned on the projector and showed me 7-8 folders of pictures of his sculptures, told me stories behind each of them, the struggles, the positive outcomes when he said and I quote, ''Whenever I put out a sculpture in the public domain, it's a property of the public also. So if I have to take the compliments, I also have to accept the criticisms that come along.'' His creativity and dynamic nature inspired me big-time when I took a tour of his own celebrity museum namely Mrinal Haque Celebrity Gallery. He told me with great enthusiasm that how the Madame Tussaud's wax museum inspired him to start his own museum with 32 different sculptures of Sheikh Hasina, Rabindranath Tagore, Kazi Nazrul Islam, Mohandas Karamchand Gandhi, Mother Teresa, Che Guevara, Shakira, Michael Jackson, Shahrukh Khan, Donald Trump, Bob Marley, Lionel Messi, Johnny Depp, Charlie Chaplin and many more.

The country has lost one of its absolute gems which I strongly agree with. He had a huge heart, always made sure to call me back no matter how busy he was whenever I left him a text. His simplicity and humble nature had attracted me the most after his brilliant work. He has been a constant inspiration to me since I was a child to date and I'll cherish the moment when he saw one of my paintings in an exhibition of mine and said, ''Your paintings are completely different from the others. They're well thought and executed.'' I'm one lucky amateur artist to have earned this compliment from a world-renowned person like him.