The Icy Cloud's Mysteries around Our Solar System 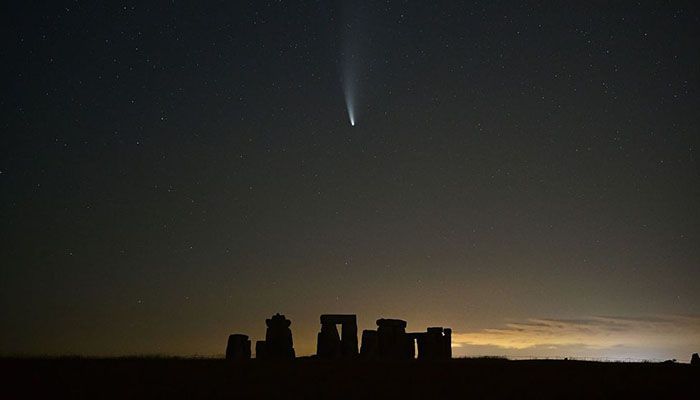 In the coldest, darkest reaches of our Solar System – a region still to be visited by human spacecraft – is a strange, frigid cloud that contains material from other stars. || Photo: Collected

﻿﻿For a few weeks in the summer of 2020, if you had been looking up on a clear night, there is a chance you might have spotted a rare visitor to our part of the Solar System. Through binoculars, it had the shape of a classic comet – a bright nucleus and long-tail formed by ice being blasted into gas by the heat from the Sun. It could even be seen by the naked eye in the Northern Hemisphere during early July.

But then it disappeared. No one who saw that comet – given the catchy name of C/2002 F3 (Neowise) – will ever see it again. Nor will their children. Or indeed will several generations after their children's children. This particular comet is not due to be seen again for another 6,800 years.

Its brief flyby, however, was notable for more than just how long it would take to return (many short-period comets visit our skies multiple times in a person's lifespan). C/2002 F3 (Neowise) is thought to have come from one of the least explored and most mysterious parts of our solar system – the vast, frozen Oort Cloud.

It is found in the furthest reaches of the Solar System, beyond the asteroid belt and the gas giants, further out than the icy worlds of Uranus and Neptune, and even far outside the distant orbit of Pluto. It sits even beyond the outer edge of the heliosphere, the bubble of plasma thrown out by our Sun which encases our Solar System and marks the start of interstellar space. (Read more about the weird space that lies outside our solar system.)

Like an enormous shell, the Oort Cloud engulfs our Solar System – not just along the plane where the planets, asteroids and dwarf planets lie, but extending in all directions. The only problem is, we can't be completely sure this enormous icy dome is really there. 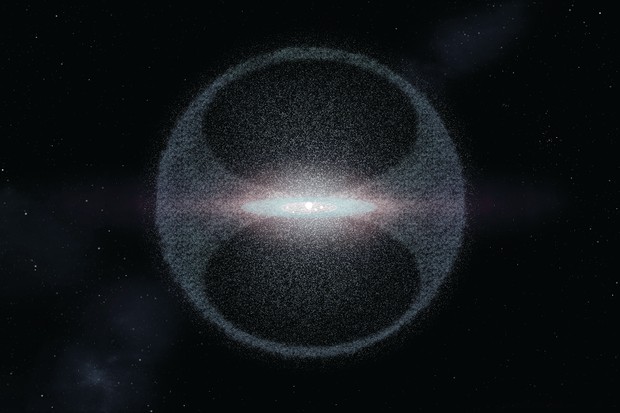 The Oort Cloud is thought to consist of billions, if not trillions, lumps of ice and rock that formed at around the same time as the planets ||Credit: Pablo Carlos Budassi)

Astronomers have never directly seen the Oort Cloud and the most distant spacecraft ever launched by humankind – Voyager 1 – is not due to get there for another 300 years. But new research and upcoming space missions are now starting to reveal some of its secrets. Visits from distant comets like C/2002 F3 (Neowise) are also providing some clues.

The Oort Cloud was first predicted by Jan Oort in 1950 to explain the existence of comets like Neowise. Unlike short-period comets, which usually take less than 200 years to orbit the Sun and come from an icy disk beyond Neptune called the Kuiper Belt, the origin of those with much longer orbits was more difficult to explain. Most long-period comets take between 200 and 1,000 years to complete one orbit of the Sun. They also have eccentric orbits, coming very close to the Sun and then extremely far away again.

"So far we don't have any other satisfactory explanation for the continued supply of long period comets we observe," says Cyrielle Opitom, who studies comets and the Solar System at the University of Edinburgh. "When reconstructing their obits, they seem to share an aphelion – farthest distance from the sun – at around 20,000 times the distance from the Sun to the Earth, in what we call the Oort Cloud."

The origins of the cloud are still a mystery. It could contain as many as hundreds of billions or even trillions of rocky planetesimals – solid bits of rock or ice, similar to comets, that are often the building block for planets. But these objects, all ranging between a few kilometres across to a few tens of kilometres, are too small to see directly from Earth even with our most powerful telescopes.

One recent study, however, has offered some insights into what it may take for the Oort Cloud to have formed. Simon Portegies Zwart and his colleagues at Leiden University in the Netherlands, used a series of computer simulations to study how the cloud formed, in chronological order, over 100 million years. It's the first study to link every step in the cloud's formation together, rather than looking at them separately.

The results show that the cloud "did not form in a simple fashion, but by a sort of conspiracy of nature, where a number of processes have to follow suit", says Portegies Zwart. Planets, stars, and the Milky Way all had a role to play in its formation, he says. "The complication of the process surprised me."

But the results mean it's unlikely our solar system is the only one enveloped by a vast, icy cloud. "Once we had mapped out the various processes, they turned out to be a rather natural consequence of the evolution of the Solar System," says Portegies Zwart.

The idea our Sun might have stolen material from elsewhere was first put forward about a decade ago. "In the Sun's birth cluster of stars, the sibling stars would have been snuggled up tight enough for their comet clouds to overlap and tangle," says Michele Bannister, planetary astronomer at the University of Canterbury in New Zealand. "Then they parted ways as the cluster dispersed." Just as the Oort Cloud might contain comets from other stars, some of our own comets may now be orbiting other stars in return. 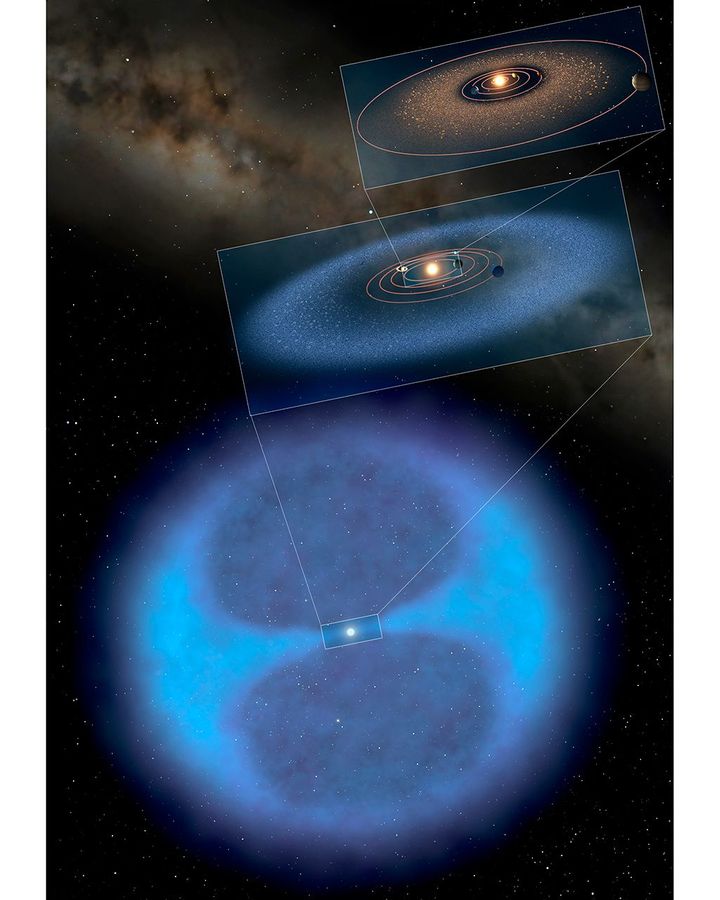 Compared to the Solar System, the Oort Cloud is an enormous bubble of material encasing the planets and our Sun (Credit: Mark Garlick/Getty Images)

One study, from November 2020, suggests interstellar objects could outnumber those from our own Solar System. Another, which released preliminary results earlier this year, identified three stars that might have passed through the Oort Cloud.

Exactly how much of the Oort Cloud comes from other stars remains a mystery, and even studying comets up close might not answer it. "It would be very difficult to know which comets were not formed here, but perhaps future studies of real-time interstellar comet visitors will give us some insights into this," says Kat Volk, a planetary scientist at the University of Arizona.

Understanding the Oort Cloud – and the comets that come from it – could give us some important clues about the origins of our Solar System and how it formed. These objects are some of the most pristine within near reach, and they're thought to have formed at the same time the planets did.

"It would be really great to be able to drill a few holes in a few Oort Cloud objects and analyse the material," says Portegies Zwart.

But with Voyager 1, which launched more than 40 years ago, still only a one-tenth of the distance from the edge of the Solar System to the Oort Cloud and unlikely to make direct contact with anything there unless it crashes, getting such samples could be a long time coming.

There are four other spacecraft that will eventually reach the Oort Cloud – Voyager 2, New Horizons, and Pioneer 10 and 11. "But it will take them so long to get there that their power source will die a long time before they reach it," says Opitom. "It is just too far."

Instead it may be easier to get samples from a piece of the Oort Cloud that has come to us. Already scientists are gleaning clues to what these mysterious objects are made of from data they are gathering from observations of passing comets suspected to have originated there.

We don't need to go to the comets to see what they're made of. Initial results from some studies have found carbon monoxide, water and other types of carbon and silicate in Oort Cloud comets.

But there is a hope that it may even be possible to get a closer look at one of these Oort Cloud comets with a space mission.

Recent missions such Europe's Rosetta orbiter and Philae lander, and Nasa's Deep Impact spacecraft have visited passing comets. Other spacecraft, such as Japan's Hayabusa and Hayabusa2 and Nasa's Osiris-Rex missions have also taken samples from asteroids to return them to Earth.

But it's not as easy for comets from the Oort Cloud, because they aren't usually discovered until a few years before they reached the closest point in their orbit to the Sun. "It's a very short timescale to build a mission and send it to rendezvous a comet," says Opitom.

One upcoming mission, however, is aiming to fly close to a comet that has come directly from the Oort Cloud rather than one that's been past the Sun a few times before. "There are spacecraft missions designed to visit new long-period comets by launching and then waiting in a kind of parking orbit until a suitable target is detected," says Volk. One of these, the Comet Interceptor, which was recently selected by the European Space Agency, will use multiple spacecraft to select a comet to target and then study it up close. 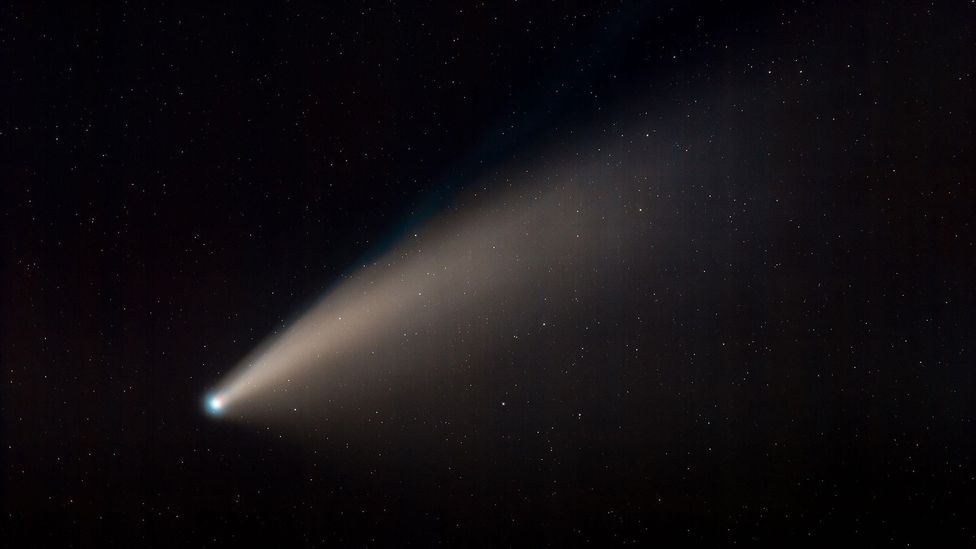 (Studying comets like C/2020 F3 Neowise allows scientists to gain insights into what objects in the Oort Cloud are made of (Credit: Giulio Ercolani/Alamy)

"This is a very exciting mission… and it will hopefully allow us to probe a very pristine comet coming directly from the Oort Cloud for the first time," says Opitom.

Before Comet Interceptor launches in 2029, a telescope currently being built in Chile called the Vera Rubin Observatory will start searching for long period comets coming from the Oort Cloud when it is completed 2023. "This will allow us to send missions to comets coming from the Oort Cloud and this is what the Comet Interceptor will do, even if it will not collect and bring back a sample," says Opitom.

Studying comets up close allows us to "monitor how they change as they're heated by the Sun when they come in close after eons in the deep freeze," says Bannister. And if it's the first time they've visited, they could carry secrets with them. Looking directly at comets in this way could help answer questions like how big the cloud really is, and how much of it came from our solar system.

While scientists continue to piece together these clues to learn more about the Oort Cloud, and gather evidence of its existence, we will only know for sure once one of our spacecraft ventures into this unknown region of space. If Voyager 1 manages to survive for another 300 years, humankind really will have reached a new frontier.

(* Abigail Beall is a freelance science journalist and author of The Art of Urban Astronomy.)