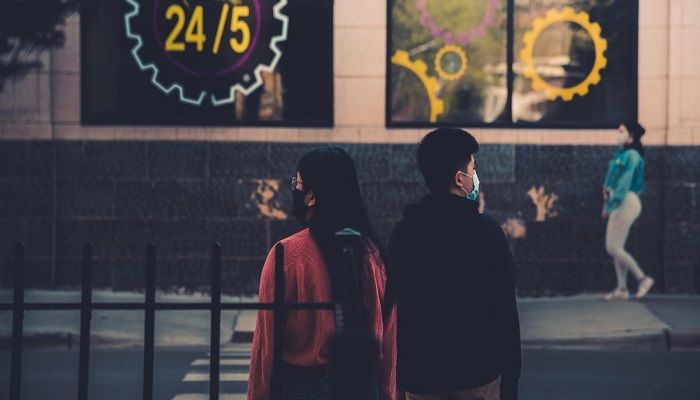 ﻿﻿I am not the first person to ever sit in a dark room watching a stock market index arrow plunge down. There is something a little different, however, about watching that arrow go down and not be thinking about investments losing money. When you're 23 and fresh out of university, the only thing that arrow represents to you is the loss of opportunities.

I felt like panicking watching that arrow as it plunged in February 2020. All I knew in that moment was that my prospects of getting a job quickly after graduating with my master's degree just became much, much slimmer. In shaky video chat conversations with my peers, we all related the same fears we had in the pit of our stomachs that we would end up like the last generation who watched the markets crash in 2008. Although we were fairly young when that happened, we all knew the horror stories.

Stocks have since recovered, which might comfort some investors. But for those of us searching for jobs post-graduation, the situation still verges on hopelessness.

Side effects are a slap in the face

Most people my age recognize that in this pandemic we are fortunate. Being young makes us far less at risk of the health effects of the coronavirus. It seems sometimes that the real troubles this generation now faces are being overlooked because we were spared the health risk.

The side effects of the pandemic, particularly its impact on the economy and by extension the hiring of university graduates, have felt like a slap in the face. I write this because those graduating this year and last year had already completed university in a time that felt more precarious than our predecessors.

University tuition fees, in countries where they are charged, are the highest they have ever been. On top of that, the cost of living in the major cities where many universities are located, especially for housing, has skyrocketed. I often found it difficult to convey to older people — who often romanticized the student lifestyle — how intensely competitive and stressful life was at many universities, and how much pressure many of my peers felt from employers who always seemed to be raising their standards.

That was all on before a global pandemic decimated many industries and often made it impossible to even leave the house.

Lost with nowhere to go?

This year's graduates are faced with a monstrously competitive hiring market not seen since 2008. Several cohorts of job seekers, both fresh from university and those who have been laid off or had offers rescinded the previous year, are jostling for the same few roles.

One friend struggling to find permanent work laid it out to me clearly: she said that doing the work of writing so many job applications while the pandemic raged felt nearly unbearable at times. Job searching is a task that requires high spirits and thick skin in normal circumstances. It's extremely hard to keep this up while experiencing intense social isolation, boredom and a lack of physical activity. At least the class of 2008 could go out for a drink to forget their troubles.

For me personally, it is much the same. Time passes rather slowly when the only thing to do is write job applications. Looking at a calendar is very stressful because I notice how much time has passed since I last worked. It's difficult to cope with the fact that it feels that something was taken away from me and others of my generation.

Young people have confessed to growing feelings of hopelessness, and many of us fear becoming a lost generation.

Governments should use policy instruments available to them to stimulate the economy and boost youth hiring wherever possible. Employers, too, can play a role. One of the biggest problems of job seeking in this time, one that makes the stressful experience even worse, is how common it is to be treated very poorly. Most job seekers don't expect much in the process, but doing considerate things like sending process updates and prompt rejections can take the edge off and give applicants more certainty.

I am very worried that the pandemic is creating a cohort that will struggle for years on end, increasing the problem of intergenerational inequality. The long-tail impact of the earning potential and life prospects of the 2008 generation is well documented. It keeps many of us in the class of 2020 up at night.

The writer is Salome Gongadze, an evaluation specialist and recent graduate from the International Republican Institute of The London School of Economics and Political Science (LSE).